👤by Dave Worth  Comments 📅15-05-19
Performance Testing
The first thing we did when taking the 1MORE Stylish True Wireless In-Ears Out of their packaging was to plug in the charging case with the included Micro-USB cable and make sure that the headphones had a full charge, the charging case is around the size of a kinder egg toy capsule or a small egg and is well made, it closes with a satisfying click however the spring loaded lid is almost too easy to open with the button requiring very little force.

A small red LED on the front of the case shows when the charging is taking place however we would like to have seen a way to tell how much battery life was in the case, either by a set of 3 LEDs or alternatively the light could have flashed, once for low, 2 flashes for medium and 3 flashes for high levels of charge, we hope this is included in the next release. 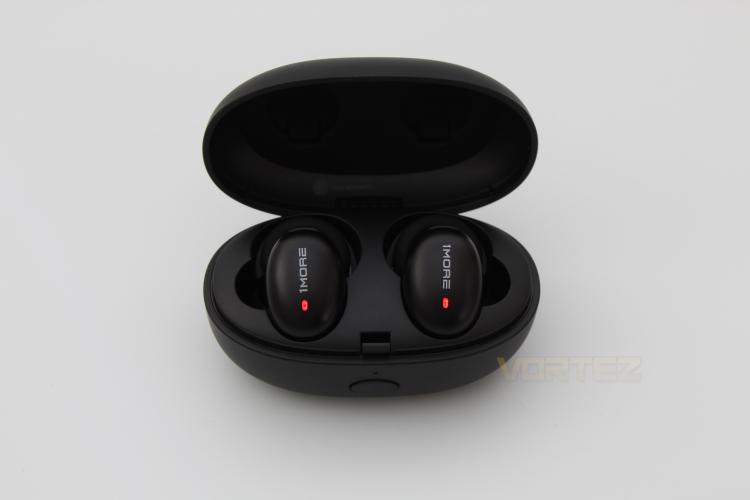 The headphones themselves are held in the charging case by magnets and even when turning the case upside down they do not disconnect or stop charging, we were very appreciative of this when we were charging the headphones with a portable battery pack in a backpack.

During our time with the 1MORE Stylish True Wireless In-Ear Headphones weve put them through their paces in a multitude of situations, weve utilised them on public transport as well during exercise which included jogging & riding a bicycle, no matter what activity were doing the headphones never became loose or fell out, this is aided by the various size of wing & ear tips that 1MORE have included as standard.

1MORE have decided to utilise a button on each ear bud as controls rather than touch controls and it has to be said we greatly prefer the buttons, a single click on either ear bud plays or pauses the current music track, a double click skips forward and a triple click skips back a track. Theres also the option of using the buttons to answer a call via a single click of the right ear bud button, or if you cant take the call you can decline it with a press & hold. We found these features great while out on the bike as we didnt have to take our phones out of pockets and could just use the buttons to jump about our playlist. The Stylish True Wireless In-Ears also support voice assistants such as Siri, Bixby & Google assistant, you can double click the left ear bud when there is no audio playback from a video or song and this will wake up the AI, you can also use your voice to activate the AI when music is playing if needed.

We put the headphones through their paces with multiple genres of bands to ensure we were covering most bases. These headphones sound great whether youre listening to Death Metal like Gojira or to the more electronic dance based Infected Mushroom and no matter what situation youre in either in the house, on public transport or exercising, these headphones perform superbly.

The headphones have utilised MEMS microphones along side environmental noise cancellation by means of DSP technology to help ensure that when youre on a call you can be heard by the person trying to speak to you. We put this to the test by using the headphones on noisy public transport and the person I was calling had no issue hearing me at all and the sound quality was okay considering the microphone is tiny and located in the ear bud.