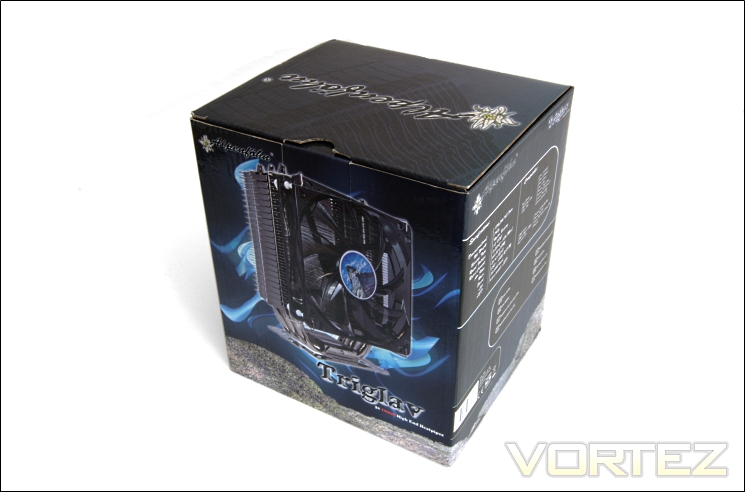 The improved packaging
The Triglav comes packaged that I am delighted to say is far more aesthetically pleasing than what the Matterhorn came in. The box is fairly compact to reflect the shape of the cooler and the design boasts more artistic flair than previous iterations. Depicted on the front is the Triglav itself with its 120mm fan attached and surrounding it are wave-like strokes. The black and blue colour scheme works very effectively. Unlike previous Alpenföhn packaging, there are no windowed cut-out making this one a cleaner more appealing design. On the side are the features and specifications as we have become accustomed to. 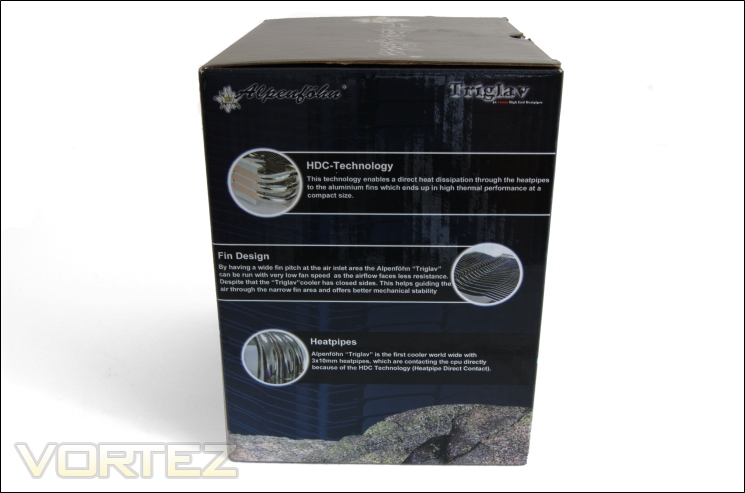 The features
The specifications are all listed on one side of the box and on the other are the features as depicted above. The three main features Alpenföhn highlight are HDC Technology, its fin design and the unique 10mm heat pipes. The latter is emphasised on all sides of the packaging. As expected, the Triglav supports all current AMD and Intel sockets dating back to socket 754 for AMD and LGA775 for Intel. 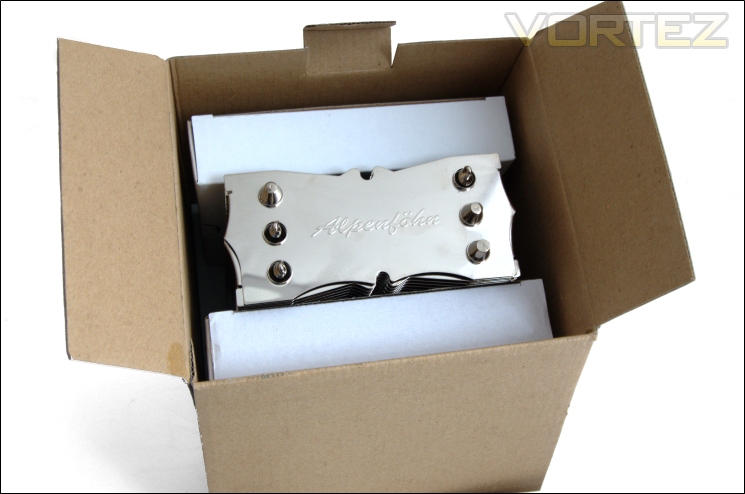 Inside the box
Inside, the heatsink is protected on top with a piece of foam and on the side are two white boxes, one containing all the accessories and bundle and the other holding the fan. Below the heatsink is another specially cut out piece of foam to provide additional protection to the base. 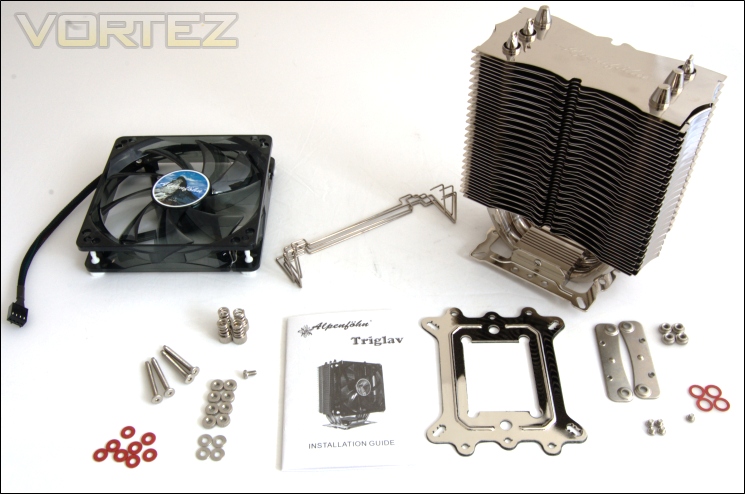 The bundle
The accessories box contains everything to ensure compatibility with both AMD and Intel sockets. Included are the:

There are a surprising number of small components for installation which makes that losing one piece easier. However, Alpenföhn do include a few spare screws and washers. The accessories come separated in Intel and AMD packets so users only have to use what they need. Low noise voltage adapters are understandably missing thanks to the fans support for PWM functionality. Four fan wire clips have been provided so the cooler can be fitted with an additional fan if necessary. To some, the mounting kit might be familiar and this is because we have seen it adopted by the Nordwand and Tuniq Tower 120 Extreme previously. The only difference is the added support for LGA1155/1156. 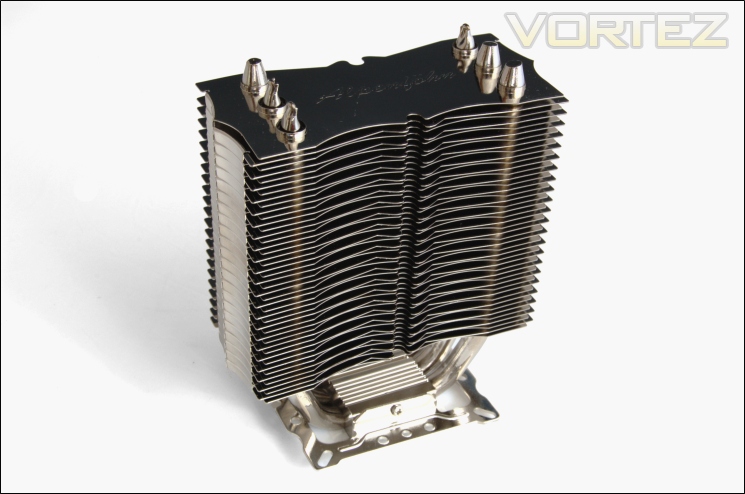 The Triglav!
The Triglav is a modestly sized cooler with undertones of the Matterhorn in terms of design, more specifically the fin layout. The heatsink uses an aluminium fin construction and copper heat pipes which as the HDC technology implies has been milled to be in direct contact with the CPU. The Triglav itself is lighter than the majority of cooler that come for testing at 760g including the fan, mostly because of its size. Its certainly welcoming to see given that many coolers end up over 1kg. The most prominent feature is of course the 10mm heat pipes sticking out at the top. 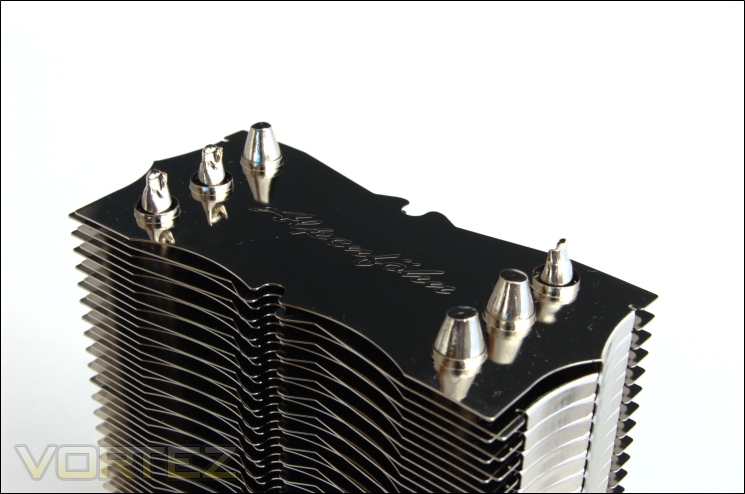 The heat pipe ends
Taking a closer look at the top, we see the ends of the 10mm thick heat pipes. As usual, half the ends are rounded while the other three are more irregular, these marking the respective ends of the heat pipes. The heat pipes are lined up in the direction of airflow meaning the 2 back columns of heat pipes are not directly cooled by the flow of air. At the top, we can also see the somewhat irregular fin shape. Unlike most coolers that opt for a more rectangular approach, the Triglav fins resemble Batmans emblem. Looking at each side of the fin we see two semi-circular grooves running down the centre. However on one side, the fin curves inward to a tip prior to the groove whereas on the other side the fin has an outward protrusion on either side of the groove resembling bat ears. This becomes relevant when we take a closer look at the fin array.