👤by Tony Le Bourne  Comments 📅25-04-12
Conclusion
As expected, the AMD A8-3870K performed a touch above the A8-3850 while trading blows in more GPU limited applications. Base performance arguably sits at the top of AMD's 'mainstream' performance bar. As many may be waiting to see what Llano's successor 'Trinity' will bring to the table, there is still a lot of life in using an APU such as this in a system and the magic really kicks in with the overclocking. I can't help but question, 'How much more performance can be squeezed out of the HD 6550D when paired with some high performance memory? 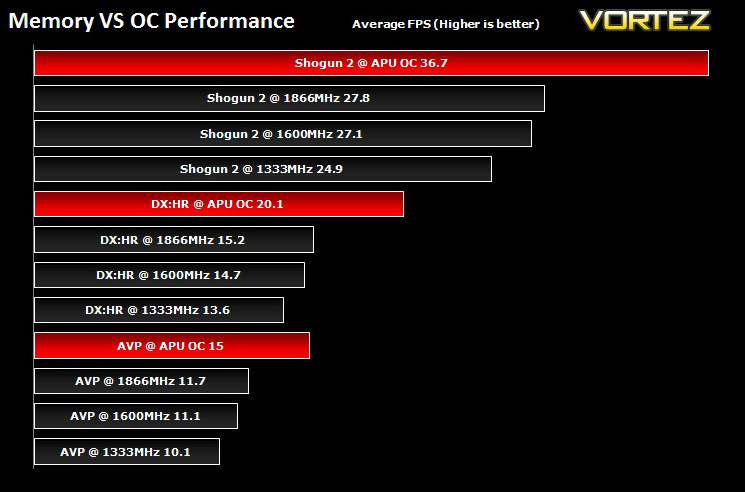 In the graph above we see 12-16% performance increase merely by shifting memory speeds from 1333MHz-1866MHz. While the iGPU may be nearing it's max performance @ 1866, with a huge 53% overclock, it is likely going to require 2133-2600MHz memory to fully realise the potential of the HD 6550D (little reminder that this APU currently holds world record memory speed). While the increased CPU performance may contribute to the extra performance, that is minimised in our tests by running the games at 1920x1080 resolution to create a more GPU limited environment. Regardless, for a chip that can currently be found from as little as £85 and potentially matches the performance of a £50 discrete graphics card, it is nothing short of impressive and would serve well in budget gaming systems or lan rigs. 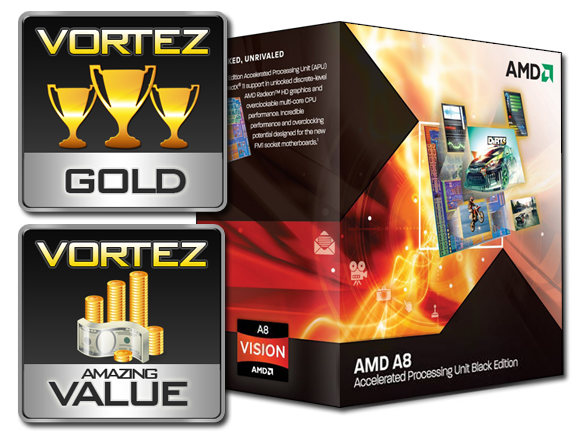 At time of writing, you could get a complete A8-3870K setup including 2x4GB 1866MHz memory for just under £330inc VAT without OS, that is fantastic value. Even though the CPU performance may not be on par with Intel's latest offering, with a decent bump to 3.6GHz, it is likely going to perform competitively with price comparable CPUs from the blue team while giving you far better graphics performance for your money. While the integrated graphics level may not yet be able to give you max eye candy at playable frame rates, back those settings down a little and even at 1920x1080 resolution this APU will hold its ground when given an overclock. The biggest downfall is however, tied to its own success. That is, the APUs offer excellent value stand alone but the second you spend £100+ on a graphics upgrade, you lose out on the iGPU performance and may end up with an inferior system than if you originally went with a CPU+GPU combo from the competition.

Modern computing demands are ever pushing a graphics rich, entertainment driven experience. Some performance numbers when concerning the 'mainstream' are, realistically, irrelevent. The APU delivers on all fronts and sets the standard for allround mainstream performance, for that amongst many other reasons, the A8-3870K has been awarded the coveted Gold Award and our Amazing Value award.