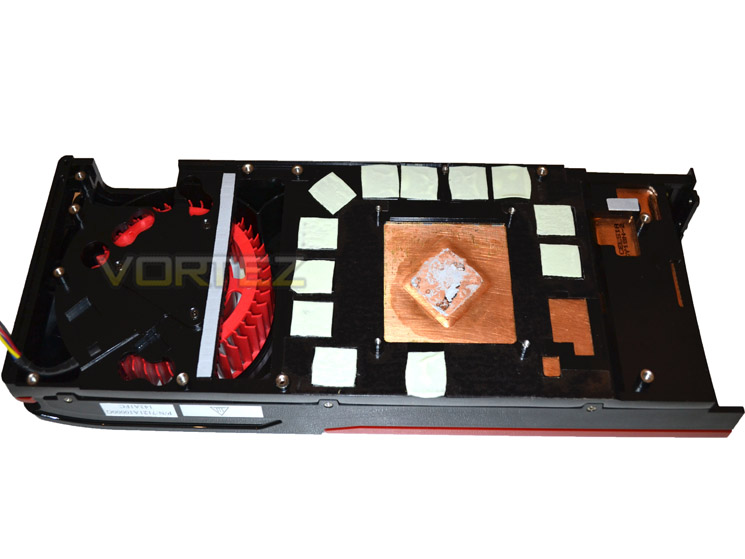 HD7970 Cooler
Removing the cooler was more involved than the 6000 series due to the number of screws but with slight of hand and a raised pulse the cooler thankfully came away after gentle persuasion. The shroud comes in two parts, the plastic shell and main frame heatsink which serves to hold the vapor chamber and the fan assembly. The memory is cooled via individual thermal sticky pads while the VRM has a more traditional 'grey' TIM pad. 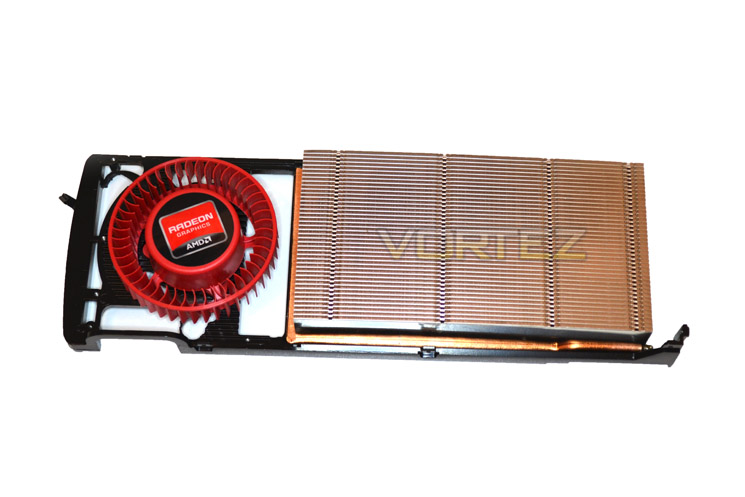 HD7970 Heatsink
The heatsink itself is a combination of a copper vapor chamber and aluminium longitudinal finned heatsink leading from front to back. From the picture above, air would be sucked in from both the vents nearest the fan end along with the fan itself. The cool air would then be passed through the heatsink and exhausted to the rear of the card. 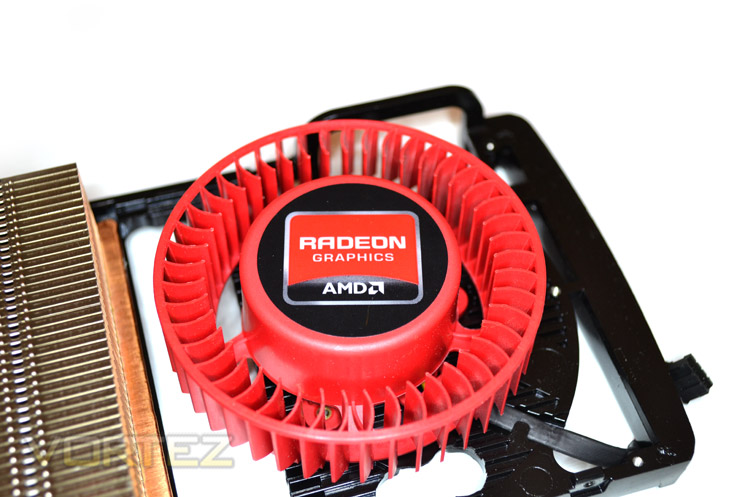 HD7970 Fan
The fan is identical to previous incarnation and is VERY loud when running at 100%. Thankfully, the fan never got anywhere near this speed during testing and rarely budged above 40% which surprisingly was relatively quiet. Overall, the new cooling design looks very good. 'Custom cooler' quiet it isn't but it's a definite improvement, at least in terms of volume over previous versions. 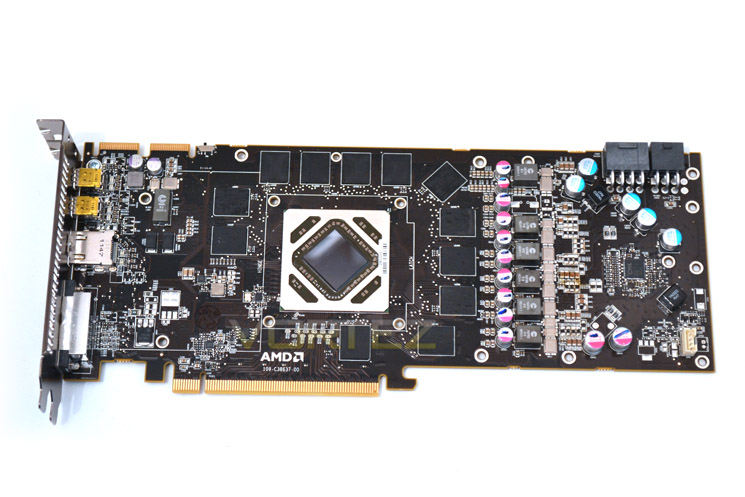 HD7970 Naked
Immediately noticeable on the HD7970 is the partial integrated heatspreader. This is a new move from AMD who traditionally have never shielded their GPU's. Unlike NVIDIA who use a full cover heatspreader to protect the delicate silicon beneath AMD have added a frame while still leaving the core exposed. Despite my own experience, I have killed a few cards by 'nibbling' the core with waterblocks which trust me is soul destroying so to see AMD afford some protection for clumsy folk like me is fantastic.

Surrounding the core are 12 x 256MB modules of GDDR5 from Hynix and to the right the 5+1 phase design. 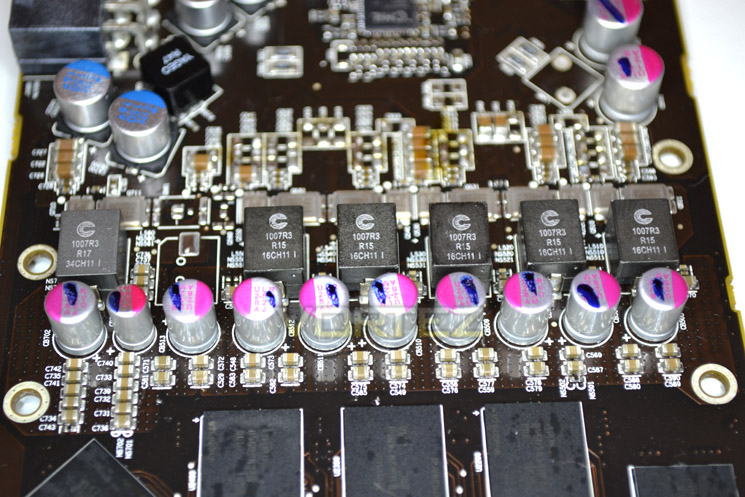 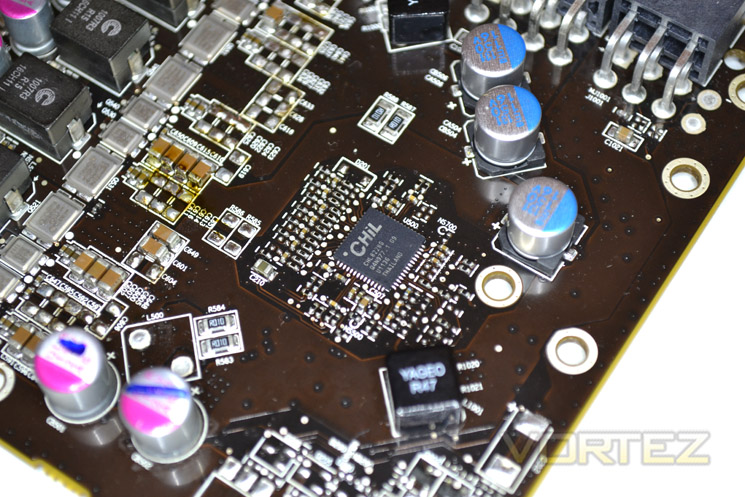 HD7970 'CHiL' Regulator
The VRM discussed above is managed by the CHiL 8228G controller but save for AMD's own overdrive utility allowing power control from -20% to +20% our favourite overclocking utility, MSI's afterburner would not allow voltage adjustments at this time. I would expect this to change in later revisons though thanks to the inclusion of the CHiL controller. 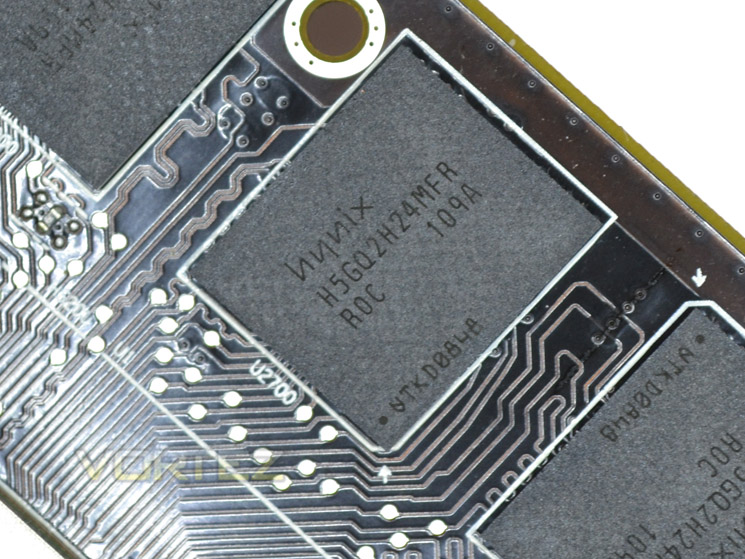 HD7970 GDDR5 Memory
The memory used on the HD7970 hails from HYNIX which is great news as HYNIX memory usually grants good overclocking results. The product number of the memory IC's is H5GQ2H24MFR R0C which is rated at 6GBps at 1.6v. 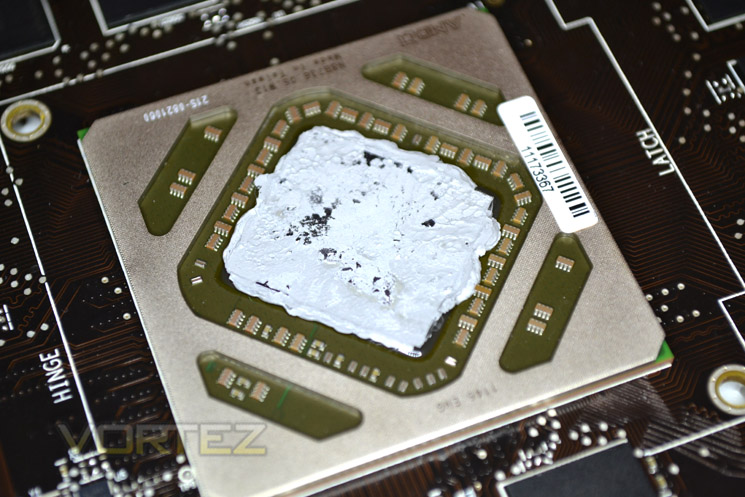 HD7970 Paste application Regulator
AMD recommended that we did not replace the paste of the HD7970 stating instead that the cooling properties would be affected and that replacement was unnecessary. However, looking at the picture above I don't believe this particualr card had the best contact with the vapour chamber. We did however do as AMD suggest and tested the card in 'stock' form. Replacing the TIM with MX-4 saw a load temp decrease of 2c idle and 5c load so despite AMD's claims, I may be tempted to replace the paste should you feel confident and competent in doing so. 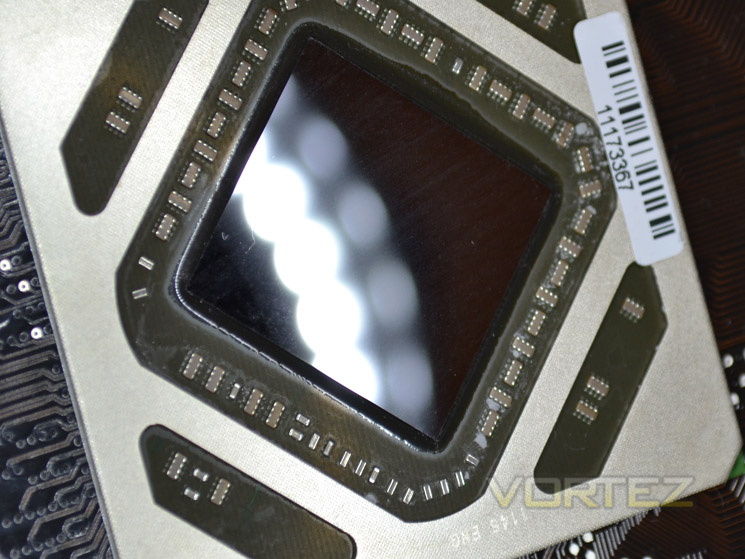 HD7970 'Tahiti' Core
Finally we reach the beating heart of the AMD HD7970, the GPU core codenamed Tahiti. Unlike older AMD/ATI cores, there were no markings whatsoever on the silicon itself with the product information instead being found on the IHS frame.

That pretty much rounds off the discussion of the card so let's take a look at the test setup we will be using today...