👤by Brendan van Varik  Comments 📅29-10-12
Overclocking
In terms of overclocking, it is difficult to expect high overclocks from such a power hungry chip such as this one. It is rated at 125w TDP at stock and that means that more voltage and clock speed is going to push up thermals fast. However, having said that, our AMD Bulldozer FX-8120 which we are pitting the AMD Piledriver FX-8350 of ours against was capable of 4.875GHz benchmark stable, so we are hoping to see our Piledriver sample hit similar clock speeds. Perhaps it will overtake its older brother, Bulldozer.

AMD Piledriver FX-8350 chips are clocked at 4GHz with a 4.2GHz turbo profile. That means at stock speeds, it is already 900MHz faster without turbo than the AMD Bulldozer FX-8120 which we are comparing it against, and that is no mean feat to achieve on the same wattage and voltage. However, the FX-8120 CPUs were capable of these speeds with the same voltages applied so it is any ones guess why AMD did not set them to this speed to begin with.

Anyway, this is part of the review is not about how much quicker it is at stock speeds compared to the older generation of CPUs. It is about finding out how far we can push it and maintain a clock speed whereby our Noctua NH-D14 can keep it cool and run through our benchmark suite. So, lets crack on!

Initially, I began overclocking with the voltage set to what I had used for our AMD Bulldozer FX-8120 review sample and used that as a starting point. Pleasantly surprised, the AMD Piledriver overclocked to the same speeds and even surpassed its older brother. Temperatures were also lower which meant that I could comfortably push the voltage up to 1.5 volts, which was not a viable option on Bulldozer. At the end, I was able to boot into Windows at 5.2GHz with all eight cores enabled. Disabling all but the first two cores (1 Module) did not help so all eight were left on. Unfortunately, as soon as you put any kind of stress on it from a benchmark, it would freeze up and restart, and occasionally throw a BSOD in our face. 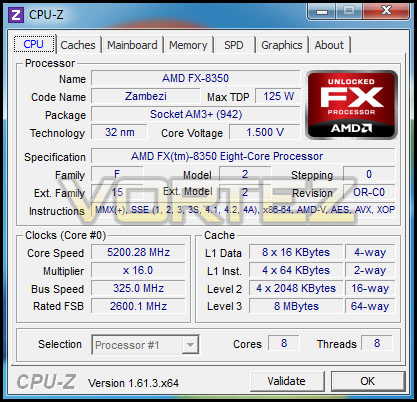 A maximum boot into Windows is all fine and dandy, but if you cannot use it, then it is pretty useless. So, the clock speed was knocked back enough until it was finally stable enough to complete benchmarks. A final and stable overclocked speed which was usable was 5040MHz. Anything higher and it would occasionally throw a wobbly which meant that our results would be unreliable. At 5040MHz, it was able to complete our entire benchmark suite without freezing up or rebooting itself once which is what we are after. 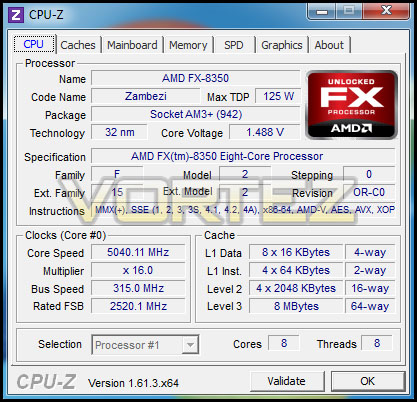