👤by David Mitchelson  Comments 📅18-11-20
Technical Specifications
Below are the technical specifications of the reference Radeon RX 6800: 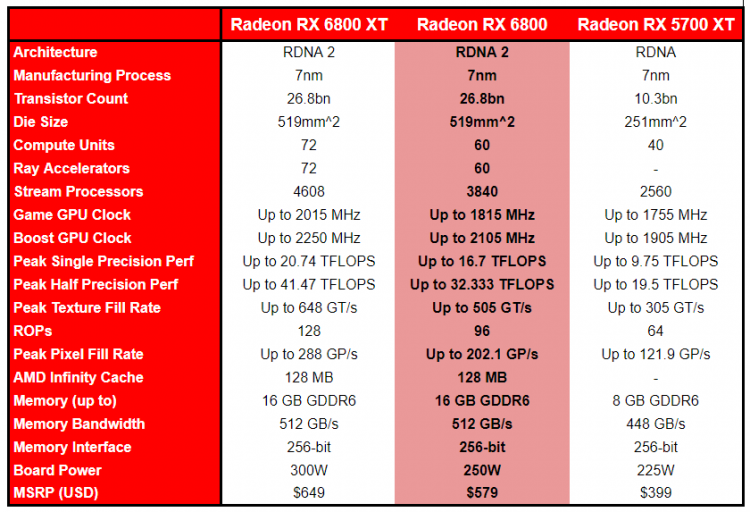 Big Navi RX 6800-series GPUs are a significant step up in size and complexity for AMD compared to the prior generation. Each is equipped with a Navi 21 GPU, but the full-fat version is reserved for AMDs flagship Radeon RX 6900 XT. Despite 10 and 20% of shaders being disabled on the RX 6800 XT and 6800 in turn, this Big Navi GPU still greatly exceeds the performance potential of their previous best.

Big Navi, or Navi 21 to give it its codename, is by some margin the largest GPU AMD have developed in years. That being said its still smaller than the flagship Ampere GPU (built on 8nm and with more transistors), meaning that AMD could have the advantage in yields and manufacturing costs. All of these factors will go into the price calculation, and hopefully may indicate that availability is more prevalent than NVIDIAs cards were at launch.

A major talking point during this generations launch cycle has been power draw. Until this year 250W was considered to be the top end of listed Total Board Power, and was where the RTX 2080 Ti came in at in 2018. NVIDIAs RTX 30-series redefined what was acceptable for a performance desktop GPU, hitting a TDP of up to 350W on their flagship. The RX 6000-series follow suit, reaching a Total Board Power of up to 300W; appreciably less than the RTX 30-series but still a significant increase over what had come before.

The Radeon RX 6800 however sits within a TDP of 250W, the same as the RTX 2080 Ti. As a consequence, it will be easier for your average consumer to upgrade their desktop system with this card without also needing to improve PSU and case cooling alongside it. Echoing this concept is the recommendation of a 650W PSU, a rating thats far more common than the 750W necessary for the RX 6800 XT, 6900 XT, RTX 3080 and RTX 3090. Plus, RX 6000-series cards utilise standard 8-pin PCIe power connectors rather than proprietary solutions in unorthodox locations, so that a turn up for the books. 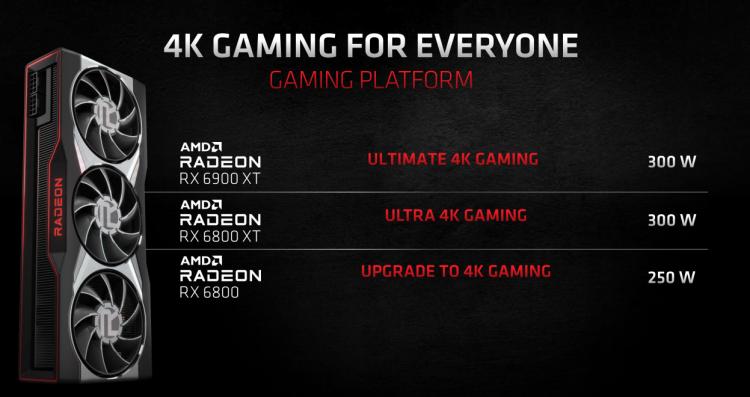 One technology that the RX 6800-series is sticking with from the previous generation is GDDR6 memory. Both SKUs are equipped with 16GB that peaks at 16Gbps over a 256-bit bus, and so far AMD are avoiding a costly transition to GDDR6x, but they still have a few tricks up their sleeve when it comes to boosting effective memory bandwidth.

Display I/O will tend to vary with model once the non-reference cards are released, but the reference card adds support for two new standards alongside DisplayPort.

Joining HDMI 2.1 and DisplayPort on the I/O panel is USB Type-C. This connectors primary purpose is to support display over USB for HMD VR devices - VirtualLink may be dead for all intents and purposes, but its legacy lives on. This connector is likely the first target for AIC partners searching for means to cut cost on their non-reference implementations, as it was with the RTX 20-series in 2018.

PCIe 4.0 returns of course, and with new innovations such as DirectStorage in the pipeline this additional bandwidth may begin to have value in the not too distant future. PCIe 4.0 is currently exclusive to AMDs Ryzen platform in the desktop market so its no surprise that it remains a major selling point of the architecture, but Intel should be releasing their own PCIe 4.0 CPUs in 2021.

With that overview concluded its time to go a bit deeper.

There are currently 999 user(s) online:
Google