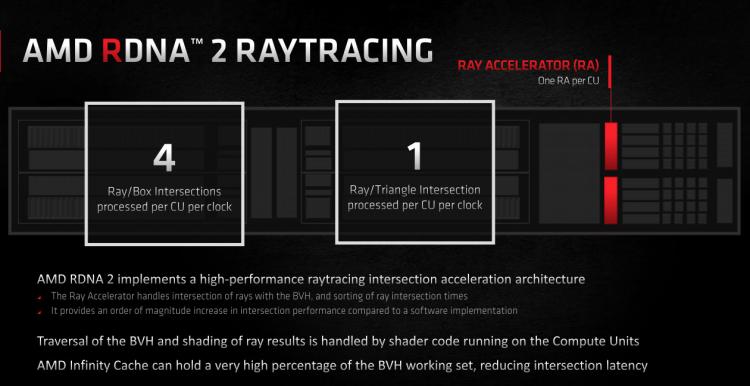 Ray Tracing has finally arrived on AMD Radeon, who are taking the realistic approach of implementing hybrid rendering techniques that blend conventional rasterisation with ray-traced elements to generate a frame in real time. These elements can include reflections, shadows and more realistic illumination, but were realistically some way off fully ray tracing a scene in real time.

To facilitate this in hardware RDNA 2 incorporates the Ray Accelerator component into its core CU design with the expressed purpose of traversing the Bounded Volume Hierarchy (BVH) structure and efficiently determining intersections between rays and boxes (and eventually triangles). The design fully supports DirectX Ray Tracing (DXR), which is the industry standard for PC gaming.

AMD utilise a Compute-based denoiser to clean up the specular effects of ray traced scenes, rather than rely on purpose-built hardware. This will probably put extra pressure on the mixed precision capabilities of the new Compute Unit. 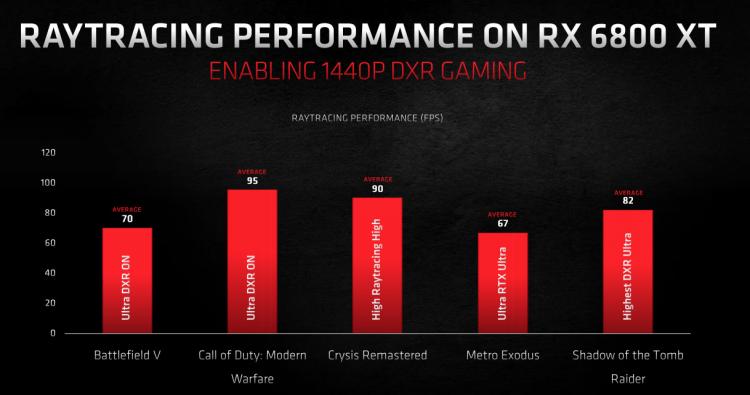 Ray Accelerators are capable of processing four bounded volume box intersections or one triangle intersection per second, which is an order of magnitude faster than ray tracing without dedicated hardware. Any game with the standard implementation of DXR should be playable.

One definite up-side of RDNA 2s ray tracing is its interaction with Infinity Cache. The sheer size of the cache means that its possible to store a large number of bounded volume structures simultaneously, taking some of the load off data management and memory read calls.

The stated performance aim of RDNA ray tracing is for 1440p60fps or better in gaming, and that will be a tall order given the lengths to which ray tracing is now being utilised. Its also notable that they dont have NVIDIAs DLSS to lean on to render at lower resolutions and then upscale to 4K, negating the performance impact of ray tracing in the process; AMD will have to rely on the raw GPU performance at native resolutions until their own advanced upscaler is ready. 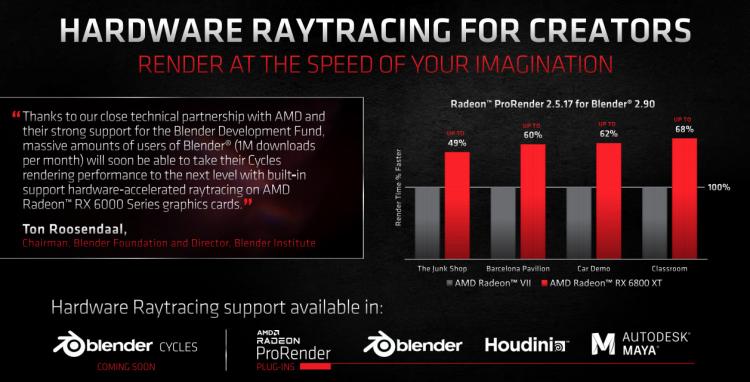 Professional applications can also take advantage of the hardware ray tracing capabilities of RDNA 2. ProRender 2.5.17 for Blender 2.90 leverages the technology to reduce render times by up to 68% compared with the Radeon VII, and other industry-leading applications such as Houdini and Autodesk Maya are also supported via Radeon ProRender plugins.

The design and integration of ray tracing capabilities into the Compute Unit is intended to be as straightforward as possible, helping to reduce the difficulty curve when it comes to leveraging the technology and make it suitable for both PC and consoles. The reason for that is simple: AMD needed to create an architecture not only to meet the requirements of Microsoft in Windows and on Xbox, but also give Sony the features required for ray tracing on PS5 with their own idiosyncratic approach.