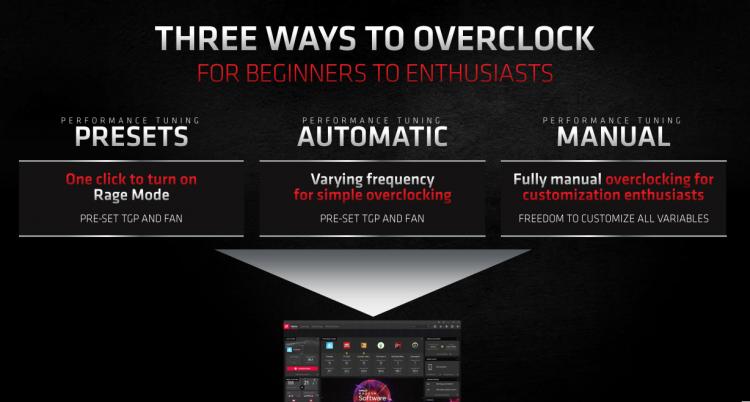 AMDs CPU and graphics divisions have utilised dynamic overclocking for generations to boost real-world processing performance based on the unique conditions of every PC configuration. Ryzen took it to the next level with Performance Overdrive 2, an algorithmic boost calculated from data supplied by a vast array of on-die sensors. Today the 6000-series will take a different tack with feature dubbed Rage Mode (named as a homage to the original ATI Rage) thats exclusive to XT-class SKUs*.

Every Radeon RX 6000-series GPU performs some level of dynamic overclocking based on temperatures, voltages, total power draw and some other metrics. That feature explains the disparity between Game Clock (the typical minimum operating clock during gameplay) and Boost Clock (the maximum theoretical clock for the given SKU). Each card will vary within that window according to the conditions at the time and the fabled silicon lottery, but AMDs binning process should keep them within similar ballparks.

Rage Mode however configures the GPU for a higher power limit and switches the card to a more aggressive fan profile to compensate. It will allow the card to push higher clock speeds, but its up to you whether the trade-off is worth it. AMD expect it to contribute 1-2% more performance on average, which is right on the limits of marginal but still relevant.

Rage Mode is one of three power profiles exposed in Radeon Settings that alter the power and fan limits of the card, the others being Quiet and Balanced. Critically, the use of Rage Mode should not violate your warranty, unlike some forms of bespoke software overclocking.

Partners may or may not choose to implement Rage Mode profiles on their RX 6000 XT-series variants. Many already utilise higher power limits and fan profiles as part of their factory overclock, leaving little room for an OC mode above and beyond it. Its effectiveness will also vary based on cooling solution.

Enthusiasts are of course as always able to manually overclock the 6000-series GPU, which may serve to be an alternative avenue to higher clocks for non-XT owners.

*the Radeon RX 6800 tested today does not support Rage Mode. This section is included for completeness

There are currently 602 user(s) online:
Google