👤by Tony Le Bourne  Comments 📅02-04-17
Temperatures & Overclocking
Though running significantly warmer than the 65W TDP 1700 CPU, the 1700X does run a little cooler than the 1800X thanks to its overall lower clock speed, also our chip managed to overclock at a relatively decent voltage, meaning it ran just a little warmer than the 1800X under full load.


*Here it is worth mentioning that Ryzen 'officially' supports DDR4 memory up to 2667MHz, however the fastest we have been able to achieve is around 3000MHz. There is some limitations of the kind of memory that you can use (whether it is single, or dual rank arrangement) with dual rank memory being limited to lower clockspeeds. However, in our testing you will see that Ryzen keeps pace with the Intel i7 CPUs (except against the quad channel chips) with lower memory frequencies. So bare this in mind when selecting a Ryzen setup and be sure to check the motherboard QVL list for tested/compatible memory (see the motherboard manufacturer website). It appears that there is still some optimisations being made and tweaked which is improving compatibility and stability, so you will also need to keep an eye out for later BIOS updates for your motherboard.*

*Using f5d BIOS on the GIGABYTE AX370-Gaming 5 motherboard*
Despite running at similar temperatures to the 1800X, we were unable to boot at 4.1GHz or over, so we can only assume that the 1700X may be lower binned than the 1800X; which we are able to boot in at 4.15GHz. So rather than trying to pump more voltage through the CPU, we decided to find a respectable frequency to boot in at (4.05GHz) and then find the lowest voltage required to keep it stable. This ended up being a rather impressive 1.387V, much lower than we anticipated, thus resulting in relatively low overclock temperatures (similar to the stock 1800X temperatures) as well as giving respectable power consumption levels. We also noted some play in the frequency of the first CPU core, but we were unable to determine if this was down to XFR or some other aspect of the sense MI technology. 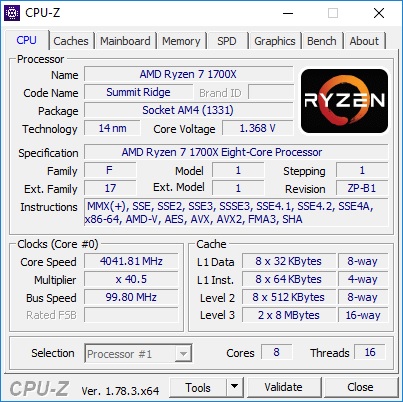