👤by David Mitchelson  Comments 📅10-08-17
Installation & Cooling
AMD have clearly put a lot of thought into the challenges of both a larger CPU footprint and moving away from familiar PGA sockets. Ensuring firm and equal pressure across the CPU contacts is key, and in this vein theyve created a novel solution in the form of a series of retention brackets that are deceptively simple to operate. 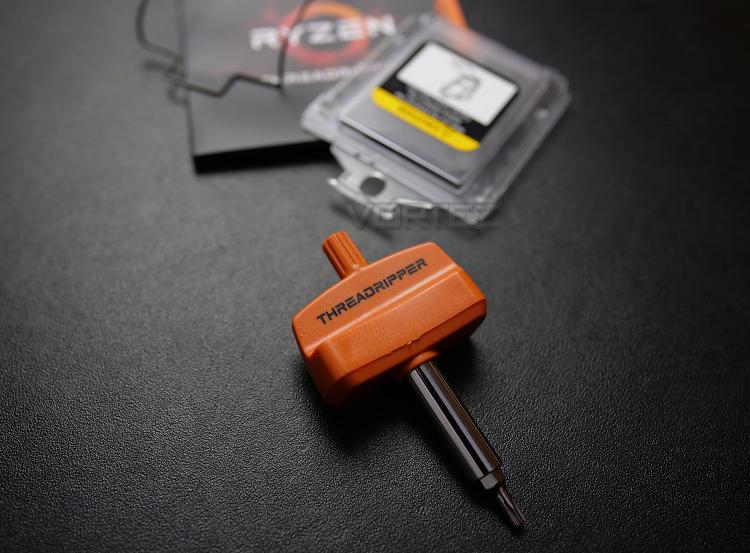 Retail packs of Ryzen Threadripper come with all you need to install the CPU into your motherboard. Included is the CPU itself in a handy bracket, and TR20 1.5Nm torx-head wrench tool. Note the orange bracket around the Treadripper CPU is not for show, youll be installing that into your system as part of the process.

Installation into the motherboard is via these simple steps:

1. Unscrew points 3, 2 and 1 (in that order) on the CPU socket retention plate using the supplied TR20 torque wrench.
2. Lift up the retention plate and slide out the clear plastic cover. Gently slide in the CPU + Orange Bracket, using the rails as a guide.
3. Remove the black socket cover by lifting the two blue tabs at the top. Be careful, the pins underneath are fragile.
4. Let the CPU in its orange bracket settle over the pins. Push the two blue tabs on the orange bracket down to keep it in place.
5. Move the metal retention bracket down and over the CPU. Tighten the screws using the TR20 torque wrench starting with screw 1, and finishing with screw 3. The wrench is set to the required torque of 1.5Nm, so fully tighten until it clicks.

Once all three screws are tightened youre good to go.

Performance aside, cooling the mammoth Ryzen Threadripper CPU is likely to prove the most contentious part of the platform. AMD have taken the step of including an adapter which will make AIO liquid coolers based on Aseteks OEM design compatible with TR4, and manufacturers have begun to roll out both air and water coolers which support Threadripper natively. There is however the thorny question of coverage.

The main role of a CPU heatspreader is to aid in the conduction of heat from CPU die to the base of the coolers heatsink or water block, and ideally the cooler would be located directly over the CPU and cover it completely.

Threadrippers 2x2 die layout and physical dimensions mean that most waterblocks and heatsink base plates will not fully cover the portion of the heatspreader directly above these dies. This could easily mean the formation of hot spots, a factor which may not be reflected in sensor readings from commonly used temperature monitoring programs. Core Temp for example will only output a single aggregated value, whereas per-core data would be ideal.

Ryzen Threadripper 1950X is a 180W TDP CPU, and as a result meaty liquid cooling or premium air cooling is recommended. A full list of recommended air coolers is available.