👤by Sahil Mannick  Comments 📅16-08-11
Conclusion
Where do we start with the Antec KÜHLER H2O 620? A year ago when we reviewed the Corsair H50 and CoolIT Eco, we found that the units matched some of the high end air coolers at the time but since then we have seen major developments in the field and ever more competitive air coolers. Unfortunately, it seems that the Antec ALC unit hasnt managed to keep with the growing competition thus finding itself lagging behind in the lower parts of our charts. There are two ways we can analyse the KÜHLER H2O 620; one way being to compare it against other ALC units and the other against air coolers. Since it is based on Aseteks latest design and technology, we expected the KÜHLER H2O 620 to be ahead of the Corsair H50. Our results at stock speed suggest that this was not the case and in terms of efficiency with different fan setups, the Corsair unit still won. At 4GHz, the Antec cooler proved to be more effective and in a few cases outperformed both the Corsair and CoolIT units. However, the difference was marginal at best and not enough to differentiate itself from the competition. On the positive side, the KÜHLER H2O 620s fan proved to be relatively quiet. Most of you who have read my previous reviews of ALC units will know how much I detest the noise that is emitted from such units. Thankfully, the Antec was more pleasant despite featuring a faster fan. While it was audible, it was in no way intrusive even during general usage. 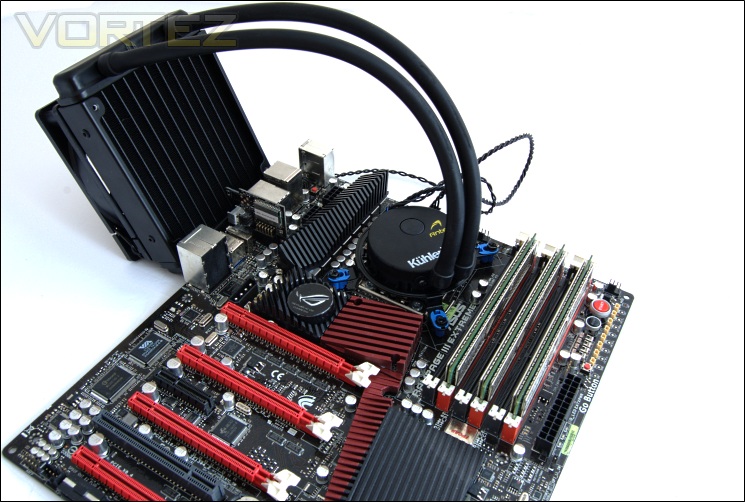 Comparing against air coolers, the Antec just cannot compete. At the price point it is being sold at, there are many air cooling alternatives such as the Thermalright Archon, Thermalright Venomous X, Thermaltake Frio or even the Thermalright Silver Arrow for a mere £5. There is no denying that those units are large but they also provide superior cooling at much lower noise levels. Those only worried about performance should opt for these air coolers over the ALC units, the Corsair and CoolIT being no exceptions. The Antec KÜHLER H2O 620 is, however, a viable solution if space is restricted but in this case, I would opt for the cheaper cooler of the three ALC units.

There were a few other annoyances with the KÜHLER H2O 620, these relating to the installation kit. The lack of spring loaded screws mean that there is no indication of whether the screws are over tightened. As a result, they might damage the mounting inserts or even flex the motherboard such that adjacent memory slots stop working.

To sum up, the KÜHLER H2O 620 is a viable solution when considering coolers for a small case but for sheer cooling performance, air coolers are the better alternatives. Pricing is a bit better than Corsairs H50 and other ALC units which is a positive.