👤by Sahil Mannick  Comments 📅10-08-11
Conclusion
The KÜHLER H2O 920 is very good product from Antec, especially as it is their first foray into ALC units. Sure, their cooler is based on Aseteks latest design but Antec have done their share of customisation to warrant their badge, such as their intuitive ChillControl software and inclusion of two PWM fans. Performance also proved to be very good, especially in Extreme mode where it came to match the Noctua NH-D14 and Thermalright Silver Arrow. The added benefit of creating a custom profile also makes this cooler very appealing. Perhaps the KÜHLER H2O 920s biggest advantage is its fairly compact size and maintenance free construction. It means that users can install it in virtually any case available without the worry of memory obstruction or height limitations.

However, I cant help but feel unconvinced by the KÜHLER H2O 920, not because Antec have done a bad job but mostly at the concept of ALC coolers. In my review of the Corsair H50 and the CoolIT Eco, I remarked that performance came at the expense of silence and this hasnt changed here. The KÜHLER H2O 920s excellent performance only came with the fan operating at a blistering 2580RPM. The problem is that many such units advertise the fact that they are quiet and yet in reality their true performance is only visible at high RPM where noise is inevitable, in this case comparable to a reference HD6970 with its fan at 100%. The KÜHLER H2O 920 does have a silent mode and can be customised to as the user pleases. As we found though, even in silent mode the fans can ramp up under heavy loads and become intrusive. Conversely when idling, the fan speeds lower drastically and we get high idle temperatures. PWM functionality does have its advantages though. Like graphics cards, it means that users can enjoy silence during normal use and have the fan noise drowned by in-game sounds under load, assuming that games are the only applications that will stress the system. As such, it is ideal for gamers but not so much for people using heavy rendering applications or other intensive applications that are not game related. 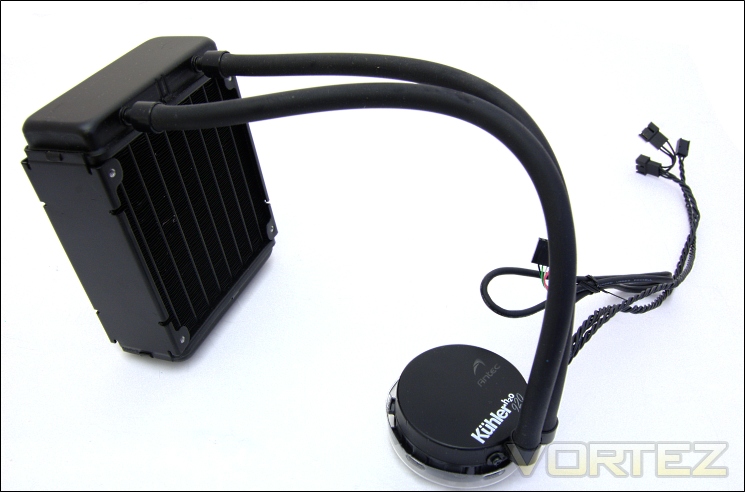 So would I recommend it? The Antec KÜHLER H2O 920 is targeted as an alternative to heavy, cumbersome air coolers. Those afraid of the pressure such coolers can put on their motherboard, especially if they need to transport their PCs often, will surely find the Antec KÜHLER H2O 920 useful. In this case, the Antec is definitely a viable option. But then we come to the price point. At £80, it might be much cheaper than a custom water-cooling loop but it is in a completely different price band to the likes of the Thermalright Silver Arrow and Noctua NH-D14. As such, it becomes harder to recommend if performance and low noise are your primary concerns. Against its competition from Corsair, the Antec is more fairly priced.

To conclude, Antec have done a very good job with the KÜHLER H2O 920. There is no denying that the performance is present. However, the concept of ALC coolers still has some flaws and until those issues are rectified, most namely noise, I will find it hard recommending such a unit over a high end air cooler from a performance/noise perspective.

There are currently 370 user(s) online:
Google