👤by Matthew Hodgson  Comments 📅02-12-19
Conclusion
Arctic, known for their cost-effective approach to component cooling, has hit the nail on the head in terms of price to performance, but there are some pitfalls which must be considered.

First and foremost, do make sure you take our performance numbers with a pinch of salt. Due to the single 4-pin PWM connection for the pump, pump-fan and two 140mm fans, we werent able to get a fan speed reading, and with our inventive approach to mounting the radiator, our numbers mightve been slightly different if we couldve installed it properly.

Starting off with thermals, the Liquid Freezer II topped our graphs in the load test and wasnt far off the mark in the idle test either, but moving onto acoustics, things take a bit of a tumble, and its that tiny little fan thats causing the issue; because its so small, it has to spin at several thousand RPM to produce any meaningful airflow, but that makes it noisy. It was, by a long way, the most noticeable component in the case in our idle acoustics test, with the noise reading dropping from 29.1dB(A) to 27.7dB(A) with a finger pressed onto that fan. Giving the system some load, the small fan was less noticeable, but the buzz was still there.

The installation, while usually only being done once or twice during the life of a cooling solution, was still massively overcomplicated. Sticking those stickers onto your motherboard was ridiculously fiddly and next to impossible for the top-right one, on the component side. And not only that, it makes it impossible to re-use the cooler on your next motherboard unless you can somehow remove them again without breaking them or damaging your board.

£79.99 in the UK for this cooler, with the performance we witnessed, is fantastic value for money but the installation process and that little fan on the waterblock does somewhat ruin the experience overall. Perhaps this is why other manufacturers arent installing small fans onto their waterblocks. 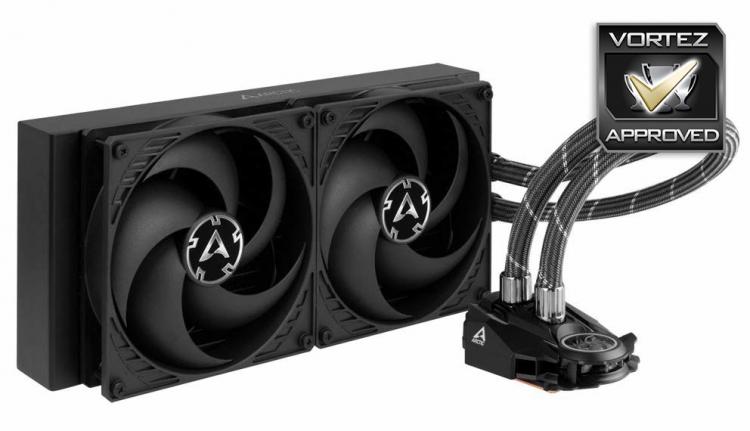 Great value and incredible performance but being fundamentally flawed makes this difficult to recommend. If only there was a simple method of disabling that small VRM fan.