👤by Matthew Hodgson  Comments 📅14-08-18
Conclusion
So, as we saw with the X470 chipsets back in April, they offered an incredible entry into high end computing at an affordable price point, however, with the B450 launch we see even better value, seemingly without sacrificing anything of real value for the vast majority of consumers.

The appeal of an mATX motherboard is most certainly there, especially one such as this with its monochrome styling, lending itself to many different colour schemes.
Looking at the base performance figures compared to several X470 boards has proven that, on the face of it, theres very little to be seen in terms of raw performance, especially when overclocking isnt a consideration.

Not only is performance almost identical, we also lose very little in terms of connectivity due to the mATX size. A single 16x PCI-E slot is ample for most usage scenarios, so arriving with two is plenty. We also keep a pair of M.2 drive slots, which some larger motherboards still struggle to accommodate, four SATA ports and a full selection of rear IO options.

Power consumption is a strongsuit of the B450M Pro4, compared to similar performance figures on the X470 platform, which drew, on average, 13w more from the plug for the same figures. Overclocking however, wasn't a strong suit, where the ASRock likely struggled because of the smaller heatsinks and scaled down power delivery. 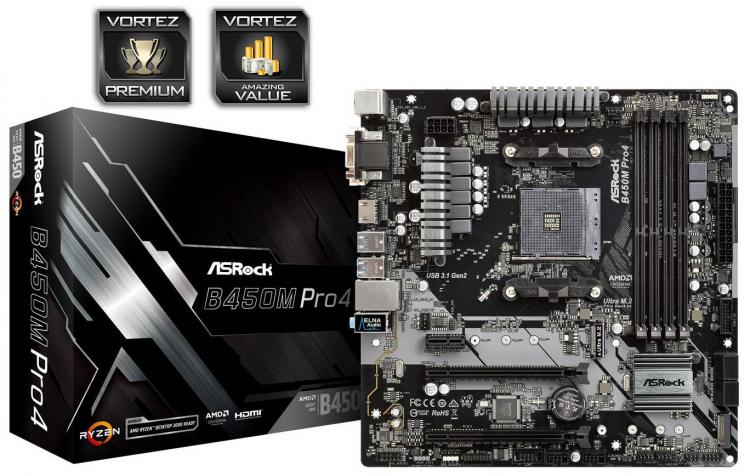 Were impressed by ASrocks ability to cram plenty of features onto a relatively small board, without giving up performance. It also doesnt cost anywhere near as much as the X470 boards weve tested while trading blows in our benchmarks.

Pros
+ Motherboard is bland but will suit many colour schemes
+ Great performance
+ As good as X470 boards in many tests
+ Good value for money
+ Twin M.2 slots
+ Simple and easy to use BIOS
+ Good energy efficiency

Cons
- Not the best overclocking

There are currently 498 user(s) online:
Google