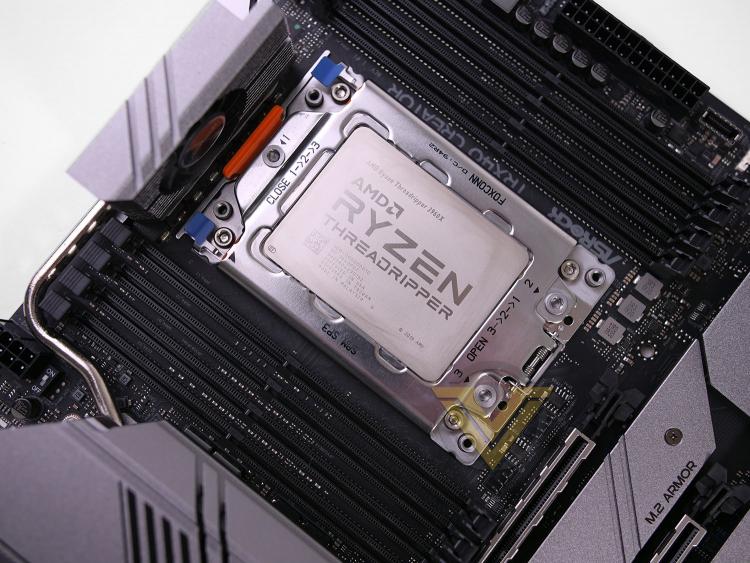 As we move in for a closer look at the features on this board, we first of all arrive at the most important area  Socket sTRX4. While the footprint remains the same as previous generations of Threadripper, this socket is not backwards compatible with TR Gen 1 or 2, however the CPU still benefits from the slot-loading design weve experienced before. Such a large surface area for the CPU requires additional thermal paste and a sTRX4 compatible CPU cooler such as the Noctua NH-U14 TR4 SP3.

The CPU has been given 2x 8-pin connectors for power delivery from the PSU  hinting that 3rd Gen. Threadripper demands a lot of juice for sustained loads.

Quad-channel DDR4 finds its way onto our Creator board  supporting up to 256GB and 4666MHz. 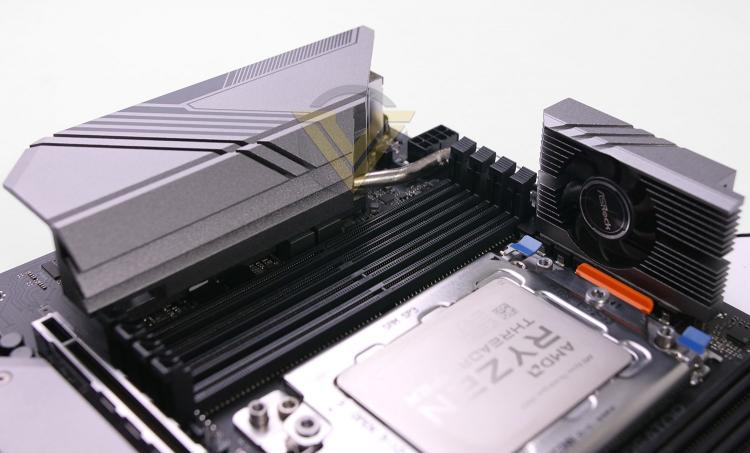 Creator uses an 8-phase design for the CPU delivery. A number of board manufacturers have opted for passive cooling of the VRMs but ASRock has designed on a twin-heatsink design with accompanying cooling fan. This, along with the chipset fan will obviously introduce noise and due to the size of these fans, this can be easily heard. In our benchmark tests well be exploring how effective this cooling system is.

Around the socket we also have the use of ASRocks Super Alloy components  90A power chokes, DRMos, Nicihon 12K black CAPs and an 8-layer PCB. 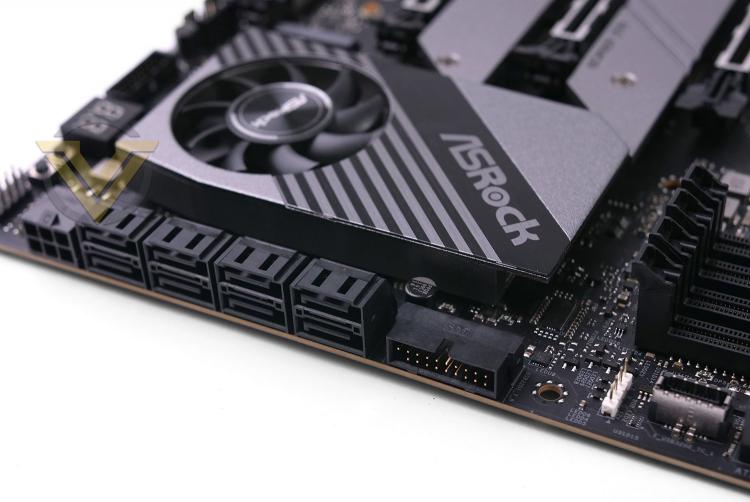 Creator is packed with storage options which include a number of different technologies/standards. For the front panel connectivity we have 1x USB 3.2 Gen 2 (Type-C) and 1x USB 3.2 Gen 1 headers. Next to both of these ports there are 8x SATA 3 (6Gbps) ports and auxiliary PCIe for additional power to the GPU. 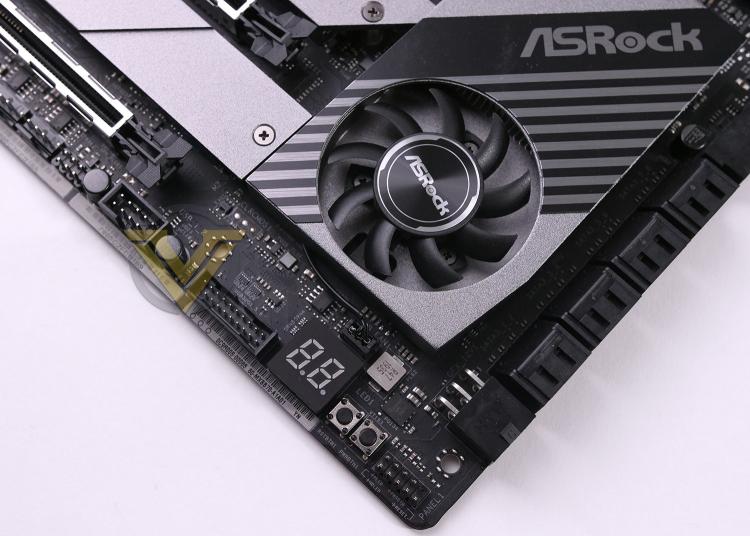 On the other side of the SATA ports we have the TRX40 chipset and a substantial heatsink with integrated cooling fan. TRX40 is a huge leap forwards from the previous X399 chipset inasmuch as it introduces the PCIe 4.0 interface, up to 72 lanes, up to 8x USB 3.2 Gen 2 ports, up to 20x SATA 3 ports and native 3200MHz DDR4 support. As such this chipset needs enhanced cooling as shown above. The only downside to this is that noise emission can be heard from the small fan during sustained loads.

In the bottom corner of the motherboard there is an additional USB 3.2 Gen1 front panel header, LED debug for diagnostics and onboard power/reset buttons. 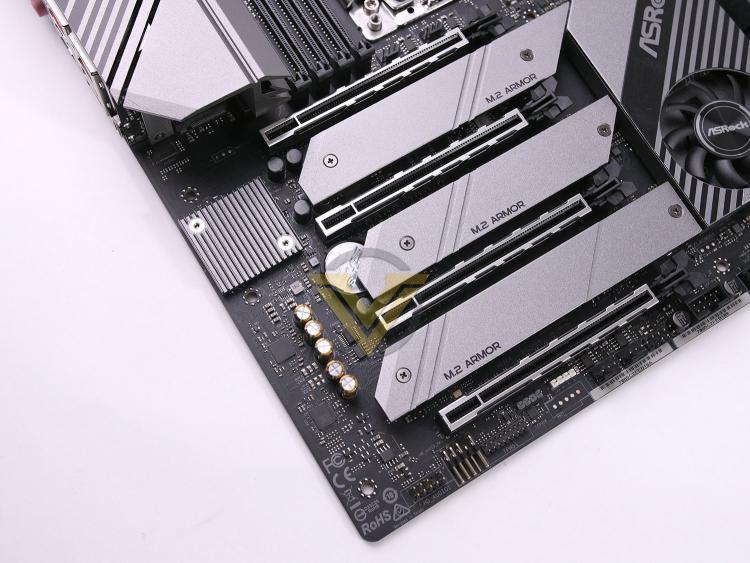 Following in the footsteps of the X570, we have a lineup of 4x PCIe x16 4.0 slots. All of the slots have been given ASRocks Steel Slot treatment and receive extra anchor points for longevity. The modes for each of the PCie are: 16, 8, 16, 8. AMD CrossfireX, NVIDIA NVLink and NVIDIA SLI are all supported.

Underneath the lower PCIe slot there are two headers  one is addressable RGB and the other 12v RGB.

In between each of the slots there are 4x M.2 SSD slots which are obviously PCIe Gen4 x4 ready. ASRock has equipped each slot to feature a full coverage heatsink to dissipate heat.

The audio section is found immediately to the left of this region and combines Realteks ALC4050H and ALC1220. ASRocks audio package is named Purity Sound 4 and weve experienced this before on other boards. 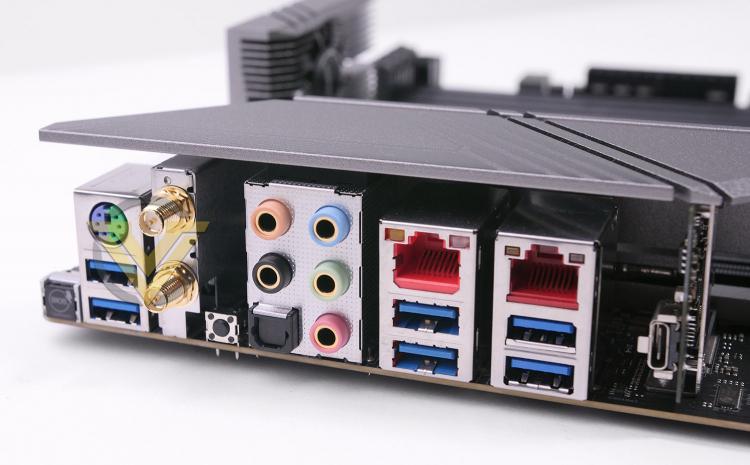 Lastly, we have the rear IO section of Creator which includes the following (Left to right):

Were slightly disappointed to not see more USB 3.2 Gen2 ports on the rear panel, once a USB keyboard and mouse are connected we only have four type-A ports to utilise.

Creator includes WiFi 6 as part of the network connectivity which delivers 802.11ax  offering up to 2.4Gbps on 2.4GHz and 5GHz. The module within the bundle corresponds to the antenna ports on the rear panel here. Bluetooth 5.0 is also available.