👤by Matthew Hodgson  Comments 📅18-09-19
Conclusion
ASRock are firmly cementing themselves as a top-tier motherboard offering, across the board. A wide variety of form factors are available, with many different budget concerns considered.

The X570M Pro4 has performed exactly as we expected it to, not exactly a performance leader but its not lagging behind in any region either. A middle of the road performance, which cannot be knocked considering the price point in which it sits.

Kicking off with the rear I/O, this is reasonably well equipped for such a motherboard, sure it lacks the 7.1 surround sound and theres only 8 USB ports, of which two are USB 3.2 Gen. 2, but the inclusion of both a DisplayPort and HDMI should make this viable for those who invest into AMDs lineup of APUs.

Moving onto the motherboard itself, theres a pair of full-speed PCI-E 4.0 NVMe slots, and eight SATA 3.0 ports which would make this ideal for those who like to keep a lot of data handy. One of the two NVMe slots is actively cooled by the FCH fan which was inaudible during our testing period.

Thanks to a 10-phase power supply with 50A chokes, even the most power-hungry of AMDs 3rd Gen. lineup should be provided with plenty of juice, allowing you to install the 3950X if you fancied. Our 3800X wasnt hindered at all by the X570M Pro4 when comparing results to motherboards costing over twice as much, with much more intricate power delivery systems.

Something weve seen on a lot of X570 chipset motherboards is built-in WiFi but ASRock, clearly as a cost-saving exercise, have omitted this feature and instead opted for a dedicated M.2 slot. An Intel M.2 WiFi card can be found for around £15/$20/$25 if you require that functionality, so factor that into the total cost accordingly.

Finally, the price. This is where the largest stumbling blocks pokes out its head. AMD have designed their AM4 socket with backwards and forwards compatibility, meaning that an X470 or B450 motherboard will handle your AMD 3000-series processor perfectly fine, providing you dont mind losing the PCI-E 4.0 specification; speaking about that for a second, theres very little that actually supports the newest standard at present, and most of that which does would likely perform almost exactly the same on a 3.0 interface. A B450 motherboard such as the ASRock B450M Steel Legend can be found for £100/$100/$140 less if you can handle a small drop in storage capabilities. 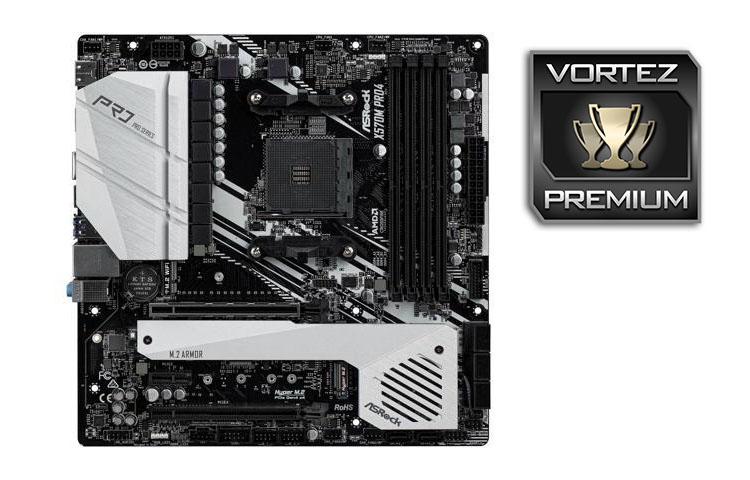 One of the cheapest X570 motherboards available with good performance and a reasonable feature set. The only downside is current B450/X470 pricing if you dont care for PCI-E 4.0.

There are currently 666 user(s) online:
Google