ASRock have been quick off the mark with the Ryzen 3000-series launch, throwing out several different models across a variety of form factors. Within todays review well look at the Micro ATX X570M Pro4.

Engineered around the AMD X570 chipset, the Pro4 is ready to accept any of the Ryzen 2nd or 3rd Gen. CPUs, up-to and including the upcoming Ryzen 3950X. With the X570 chipset comes a plethora of next-gen features, one of which is the PCI-E 4.0 standard, offering double the bandwidth of the outgoing specification, but with full backwards compatibility.

Making use of the new PCI-E 4.0 specification are a pair of x16 full-length ports as well as a pair of NVMe M.2 slots for rapid storage solutions.

Other features employed on the Pro4 include an XXL Aluminium alloy heatsink to improve stability by removing heat from the MOSFETs around the CPU, premium 50A power chokes for enhanced voltage delivery to the processor, a 2oz copper PCB for effective temperature reduction with a high-density fibre glass PCB for improved strength and reduced susceptibility to humidity. 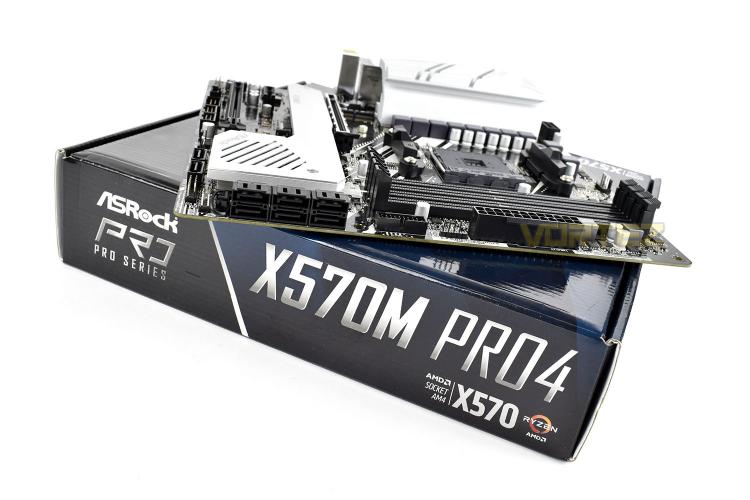 The ASRock X570M Pro4 has been designed for power-focussed individuals who tend to keep a smaller system. You dont receive the full complement of PCI-E ports but otherwise, it aims to provide the same level of performance youve come to expect from ASRock.

ASRock on the X570M Pro4:
This motherboard features onboard RGB headers and an addressable RGB header that allow motherboard to be connected to compatible LED devices such as strip, CPU fans, coolers, chassis and so on. Users may also synchronize RGB LED devices across the Polychrome RGB Sync-certified accessories to create their own unique lighting effects.