The desktop PC landscape was forever altered this autumn with the release of AMDs brand new Ryzen 7000-series of CPUs, which exploited a whole new processor architecture to bring more performance and improved power efficiency to the table. An integral part of this release was the launch of brand new motherboard chipsets, accommodating a new CPU socket and support for the latest memory standards; and today were taking a closer look at the first of these components that landed on our doorstep.

At first glance X670E might appear to be a simple evolution of X570 to adapt to a new socket and memory type. AM4 has been replaced by AM5, a new 1718-pin LGA-type socket thats compatible with a subset of AM4 coolers (but youll need to check compatibility listings for your specific HSF/AIO). Up to four slots of DDR5 memory enters the picture, with no alternate support for DDR4 in this generation of motherboards. Sixteen PCIe 5.0 lanes are supported to discrete GPUs, greatly improving available bandwidth, and four more for the latest PCIe Gen5 NVMe SSDs. Each of these might be compelling aspects to the platform for a significant subset of end-users.

However, with X670E being the apex, the landscape of 600-series motherboards is quite complex by AMDs standards. At the top sits X670E (or X670 Extreme), after which there are X670, B650E and B650. Each step down sacrifices either raw performance (dropping from PCIe 5.0 x16 to PCIe 4.0 x16 for instance, in the case of X670E -> X670) or significant native I/O capability (i.e reducing the number of USB 3.0 10Gbps & 20Gbps ports). And thats before addressing the value-added functionality added by AMDs own motherboard partners throughout their premium, performance, gaming and mainstream ranges. 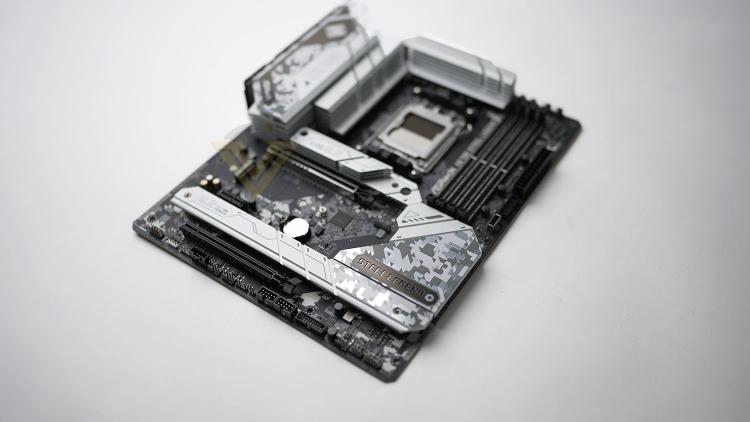 ASRocks Steel Legend brand has been a strong one for a handful of generations now, serving as a welcome mid-range gaming model that sits below their flagship Taichi series in the stack for any given chipset. The X670E Steel Legend applies the same to the 600-series, but is absolutely one of the more premium-priced variants released by the Taiwanese company simply by virtue of X670Es component cost.

In the recent past weve been impressed by the balance of price and features that ASRock have brought to bear in Steel Legend designs, and as always have welcomed the alacrity with which theyve released BIOS updates that address performance and reliability concerns. Thats going to be critically important given the newness of the platform; those buying today are essentially early adopters into an almost brand new ecosystem.

In addition to the performance-oriented toolkit available through the X670E chipset, ASRocks Steel Legend variant builds up from a strong base through a 16+2+1 Phase Power Design, 8-layer PCB to improve signalling and electrical isolation for sensitive DDR5 and PCIe 5.0 components, high-speed memory support up to DDR5-6600MHz (OC) and third-party audio thanks to Nahimic by Steelseries.

At £369.95 the ASRock X670E Steel Legend isnt the most affordable X670E motherboard available, but it is also far from the premium end of a range that typically exceeds £500. Not unsurprisingly its US price is much more attractive, potentially making it a keener option for those in the market for AMDs top-end designs.