ASRock have gone from strength to strength lately. We adored their Z68 Fata1ty offering and the Extreme version based on the same chipset with both Intel based motherboards gaining our coveted Gold awards. Often overlooked by consumers, the ASRock boards used to play second fiddle to the big boys but they are rapidly gaining a reputation for producing quality, robust, great looking, high performance motherboards. Today we will be investigating the X79 based ASRock motherboard to see if carries on from the solid foundations their Z68 range has laid.

The two X79 based motherboards we have reviewed thus far have both thrilled and frustrated in one form and another. Overclocking was good, if somewhat fragmented in operation. Both boards offered a mass of features and of course both motherboards were based upon the X79 chipset. Perhaps the most basic comparison though was that they are both ATX based. Being a high end enthusiasts chipset it would be easy to forget about those who crave the same power but prefer a smaller package and thus ASRock sent us their X79 Extreme4-M, and mATX motherboard that looks to offer the same (or better?) performance yet from the smaller mATX specification. 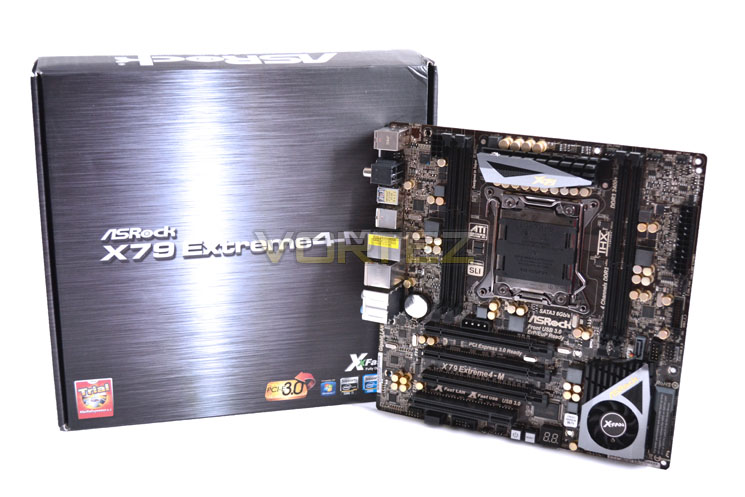 Personally, I've never been a fan of mATX. For a media PC then I can see the point but perhaps (somewhat arrogantly) I frowned upon a motherboard that didn't offer all of the features the ATX boards could, most often due to the size difference. Lest we forget however, the vast majority of users will never have multiple GPU setups or an additional sound card so there is little need for multiple PCIe slots. Yes, it's nice to have the option but at what cost? mATX in years gone by had also trimmed back on other features. Less PATA/SATA ports, less USB ports, pretty much less of everything but in truth, can you honestly say that you ever fill all of your SATA ports, populate all of your PCIe slots or indeed use all of the USB ports? Not many I would wager. So why then are mATX motherboards overlooked in favour there bigger brothers? Like I said previously, a large value is placed on the 'it's nice to have' phrase. It's also nice to have a Ferrari but if you are never going to use it whats the point?

With today's society looking for more value for money, better efficiency yet all bundled up in a smaller package you would think it makes sense to opt for a mATX motherboard. As we will see, bigger does not always translate to better and despite being smaller, the ASRock may just have one or two tricks up its sleeve to outperform its bigger competitors. The legend of David and Goliath spring to mind with this review so it remains to be seen if the ASRock can sling-shot its way past the giants or will it be crushed beneath the sole of the bigger ATX motherboards? I think it's time we found out...