👤by Richard Weatherstone  Comments 📅16-07-12
Conclusion
The ASRock Extreme6 GB poses an interesting proposition in that it is designed as a mid-range motherboard (the extreme 7 an 9 being higher specified) yet including the Game Blaster add-on card enhances the motherboards appeal. Sadly the cost also increases. At £230 it is not the most expensive motherboard we have come across on the X79 platform and it does weigh in some £50 cheaper than the range topping Extreme9 and only £15 more than the Extreme 7. Would I chose it over the Extreme 7? Yes and here's why:

The Extreme6 GB is a motherboard that pretty much has everything a mainstream user could want. First off, it looks great. Save for the questionable silk screening process of the PCB, the gold caps married up to the gun metal grey heatsinks is joy to behold. The only issue you might have is filling it with equally visually stunning components. All too often though we see that beauty is only skin deep. I am happy to report that this is not the case with the Extreme6. From the component used to the UEFI BIOS, each and every section of this mainboard is very well thought out. The layout of the motherboard is great aside from the GPU power connector. There are plenty of SATA ports, 8 DIMM slots (2 more than the Extreme7) and as long as you don't intend on running three GPU's with the Game Blaster sound card too you shouldn't have any spacing issues to contend with. 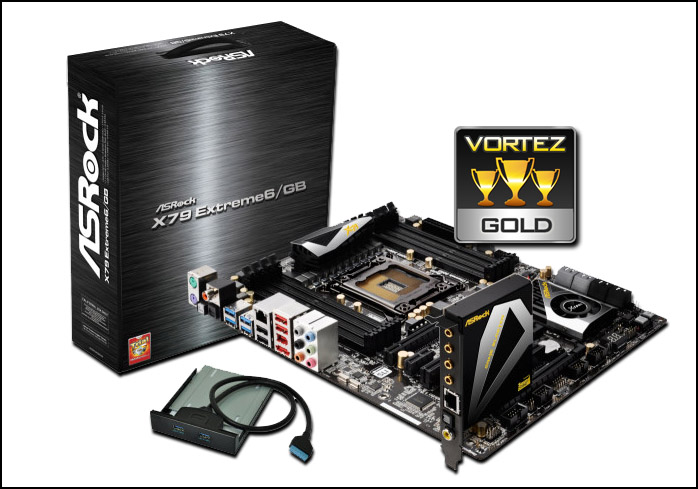 I've Purposely left discussion of the Game Blaster expansion card until the conclusion as it is the one thing that separates this board from being a good package, to a great package. While on-board Realtek ALC898 is perfectly adequate for most scenarios, gamers crave better and this appears to be the ethos of the Extreme6. Using the Game Blaster will allow both LAN ports to be used simultaneously but the main selling point is the Creative Core3D 7.1 HD audio which brings your gaming experience to life. I won't profess that it can compete with the features of the high end ASUS Xonar cards because quite frankly it can't but for gaming you will be hard pushed to tell the difference between the two. I only hope driver refreshes are forthcoming as this was always Creative's downfall. Regardless, adding in a quality sound card certainly pours value into the overall package and certainly offers the gamer a complete, quality package rather than buying a motherboard and a separate sound card at a later date. Of course, the sound card is as aesthetically pleasing as the mainboard having the same design as the motherboard heatsinks. The only drawback being you will be limited to two available PCIe slots for your graphics cards. This however may not be such a bad thing as most gamers are unlikely to use TRI-SLI or CrossfireX in a 3 card configuration - those that do will no doubt have the money to pay for a flagship XL-ATX mainboard able to accommodate such a monster GPU setup.

So if you are looking for a very capable, overclocking friendly, feature packed mid-high end gaming foundation, the ASRock Extreme6 GB ticks all the boxes and is therefore deserving of our Vortez Gold award.

Click here for an explanation of our awards at Vortez.net. Thanks to ASRock for providing todays review sample.