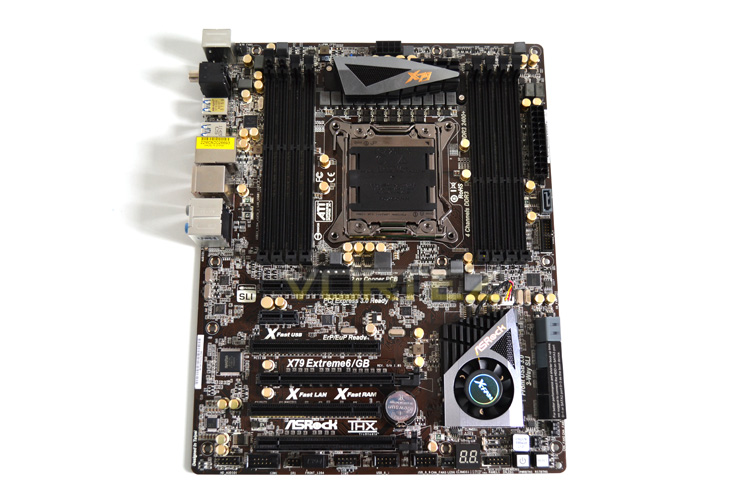 Motherboard Front
Like all of the extreme range, the Extreme6 features a black PCB with a smattering of gold and silver. The PCB, while silk screened black looks dark brown due to the copper traces of the motherboard shining though which is a shame. The Gold comes courtesy of the solid caps with the silver, or rather gun-metal grey provided by the gorgeous looking heatsinks. The board is will laid out with all the main connectors found around the leading edges save for the GPU MOLEX power port which is in an odd position, right above the uppermost PCIe socket. 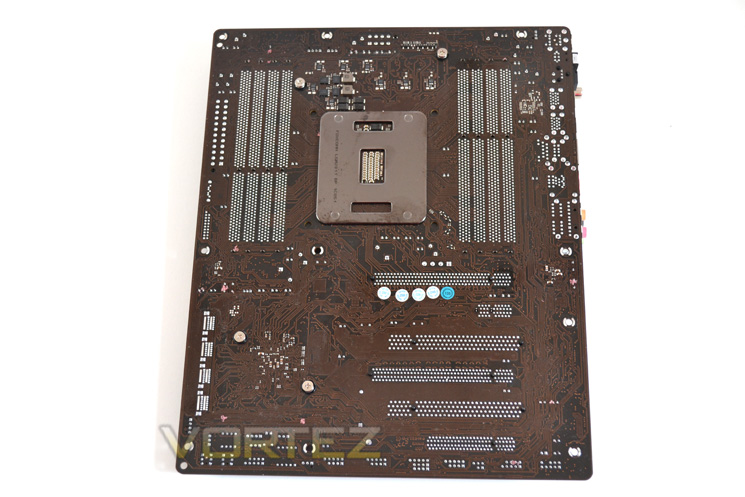 Motherboard rear
Under extreme lighting conditions you can see just how brown the mainboard looks. Under normal lighting though it looks much darker and you will barely notice once the board is hidden away inside a PC case. Regardless, I would like to see a matt black silk screen procedure which will hide the copper tracing much better and give a deeper black. Aesthetics aside, the rear of the motherboard features a couple of chokes with 4 MOSFETS, testament to the cramped VRM found above the CPU socket. Thankfully these do not appear to interfere with CPU cooler backplates. 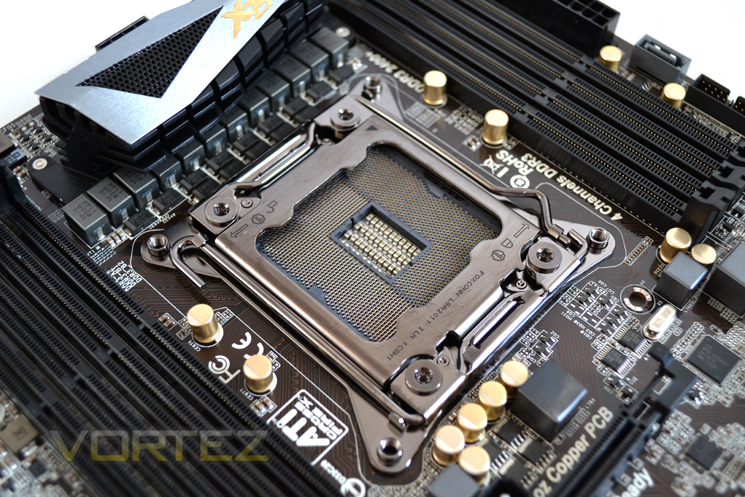 CPU Socket
The CPU socket is rather cramped too due to the solid caps. While again these do not interfere with the fitment of CPU coolers, extreme coolers prefer a clutter free area for insulation purposes. The Tantalum core capacitors do add a touch of class to the socket area and while the gold caps look the business, I would prefer to have seen a cleaner CPU socket area. 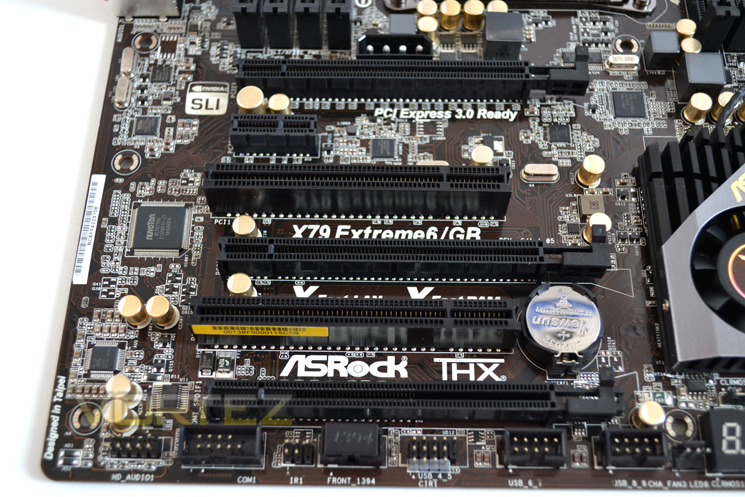 PCI Area
From top to bottom we have: PCIe 3.0 x16, PCIe x1, PCI, PCIe 3.0 x16, PCI, PCIex8. In Crossfire or SLI configuration, the uppermost slots will remain in 16x mode however adding a further GPU will reduce the amount of lanes by half to 8. IF you intend on using hte Game Blaster card, you will have to sacrifice a PCIe slot regardless unless you intend on running watercooled graphics cards that only take up one slot of space. 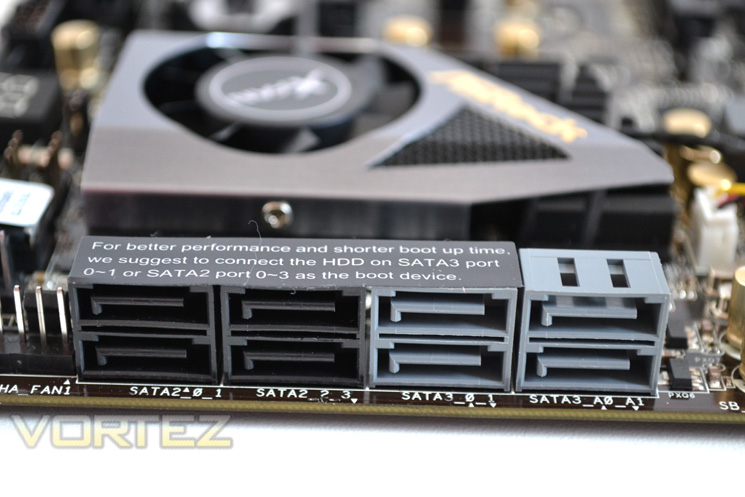 Serial ATA
The Extreme 6 features both SATA 6Gb/s and SATA 2 ports courtesy of the X79 chipset and a separate chipset from ASMEDIA in a 5+4 configuration, the grey ports being SATA 6Gb/s. 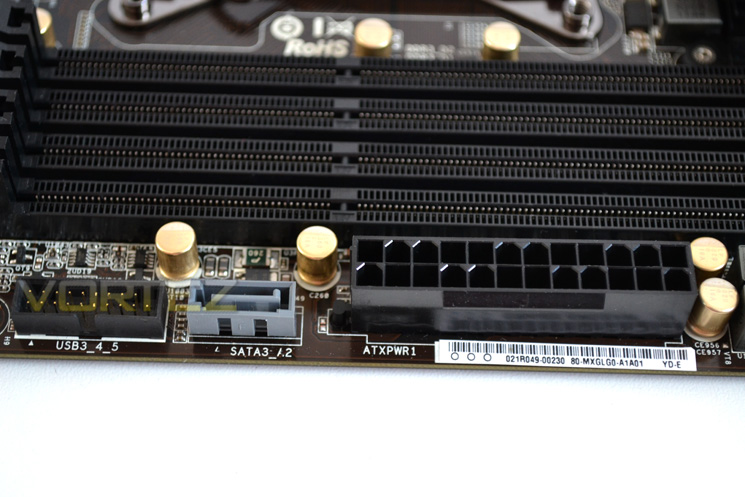 Power ports
Motherboard power comes courtesy of a 24pin ATX socket and a further 8pin EPS12v socket which is hidden out of sight behind the uppermost heatsink. Both ports are on the leading edges though so cable tidying should be a cinch with this mainboard. 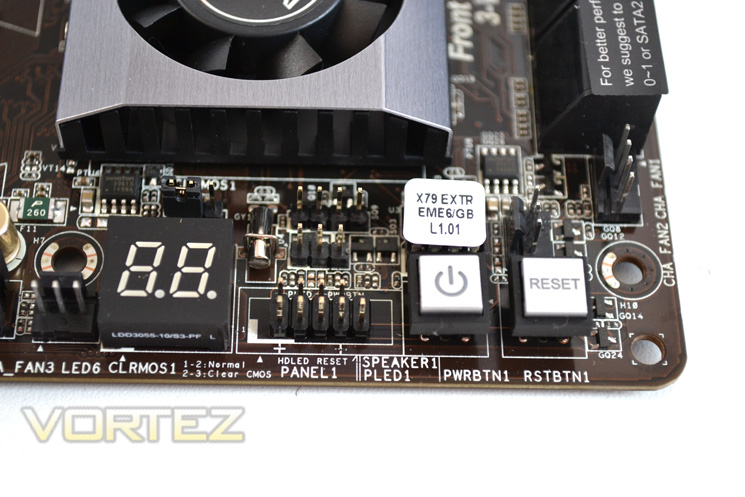 On-board control
The board can be powered and reset by the use of onboard buttons. Sadly these are not illuminated which was a shame but they work perfectly nonetheless. There is also a diagnostic 'debug' LED available which glows red on startup until it has gone through the booting process and all is well. After which it too extinguishes. 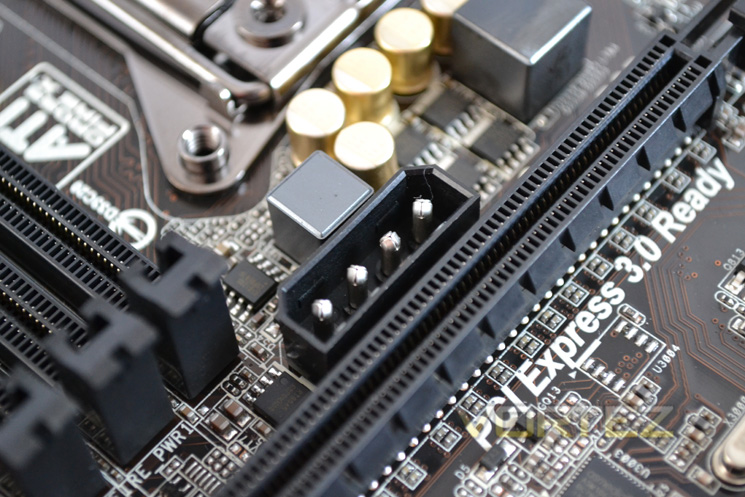 Extra GPU Power
One oddity with the motherboard is the inclusion of a MOLEX power socket. This provides extra juice to the GPUs when used in SLI/Crossfire. Strangely the motherboard seemed unsure of whether this was necessary or not but it's a welcome addition regardless. I only wish ASRock had chosen a better position as where it currently sits could prove untidy to have a cable stretching agross the backplate of a GPU. 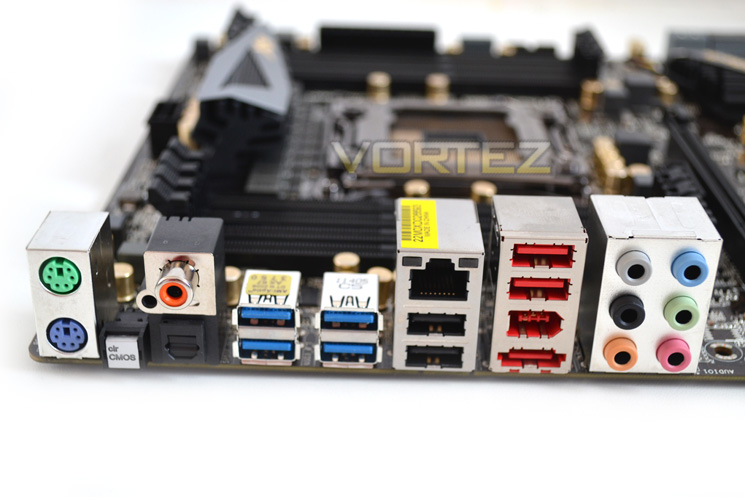 I/O Shield
The I/O area of the motherboard is very well laid out. LEft to right we have PS2 keyboard and mouse sockets, a clear CMOS button, S/PDIF and optical out, 4xUSB 3.0 ports, LAN RJ45 port, USB 2.0 port, 2 red USB 2.0 ports, Firewire, eSATA ports and 6x3.5mm audio ports. The amount of USB ports can be expanded further with the inclusion of a USB bracket.