👤by David Mitchelson  Comments 📅17-02-16
Intel Z170 Features
Intels initial release schedule for Skylake was planned well in advance, long before Microsoft officially announced the launch date of Windows 10. Most of August was set aside for conferences and seminars including the Intel Developers Forum in San Francisco, all with the aim of taking the wraps off and going deep into the technology within this new CPU architecture. Unfortunately bringing forward the release date of K-series SKUs has meant that theyre unable to furnish detailed technical info to reviewers and members of the press, and wont be releasing this information until IDF. The following is information which has been released thus far.

Developed under the codename Sunrise Point, Intels 100-series chipset is designed to operate hand-in-hand with an Intel Skylake 6th Generation core processor. It utilises an LGA 1151 socket, underscoring the fact that neither CPU nor motherboard are backwards compatible with any of the previous generation hardware. As a result Sunrise Point is free to add additional features not present in x90-series and earlier chipsets.

Most notably from a consumer perspective Sunrise Point is the first Intel mainstream computing platform to be compatible with DDR4, and most Z170 and H170 designs are indeed likely to feature this memory technology rather than continue with DDR3L (a memory spec which Skylake CPUs can also handle). Default support is at DDR4-2133, however speeds above this are possible if a Z170 motherboard and K-Series CPU are used in tandem. One year on from the release of Haswell-E DDR4 pricing is quickly becoming more bearable, and so whilst its an additional expense to swallow compared with Haswell/Z97 it may not be quite the price premium you expect.

With Skylake Intel are, for the first time in many generations of Core architectures, once again re-enabling fine grade overclocking of memory at the Base Clock (BCLK) level. The PCI subsystem clock is now independent of BCLK, allowing for robust overclocking support which dispenses with coarse ratios in favour of a MHz by MHz stepping to far higher levels. Pre-launch testing by board partners have ascertained that stable BCLKs of up to 400MHz are possible (with a stepping down of CPU multiplier), a far cry from even last years Haswell Refresh.

It should be noted that overclocking support has also been improved through greater control over individual CPU voltage inputs. Haswell made use of a Fully Integrated Voltage Regulator on the CPU itself; in essence, the motherboard supplied one input voltage and the FIVR divided this into individual on-board component inputs. With Skylake/Z170 the motherboard chipset controls each of these voltages individually, allowing direct adjustment for greater stability where necessary. This could theoretically be a great boon to enthusiast overclockers eager to get every last smidgen of performance out of a system. 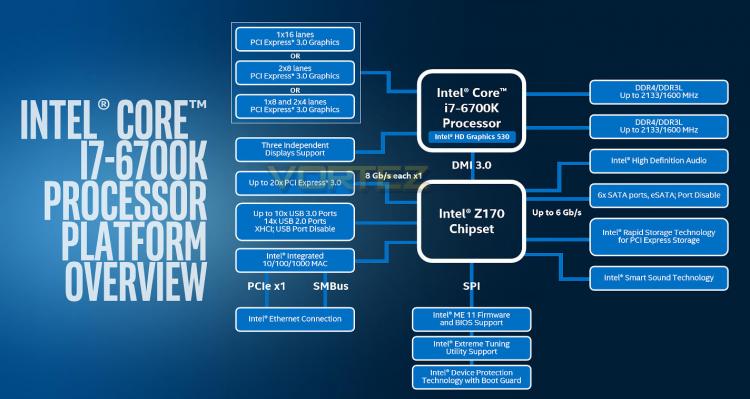 As we noted in our review of the two launched Skylake CPUs, up to 16 PCI-Express 3.0 lanes exist as a direct low-latency connection between CPU and 3rd party hardware such as graphics cards. These can operate in a 1x16 lane, 2x8 lane or 1x8 lane and 2x4 lane setup for multi-GPU configurations depending on the hardware implementation chosen by the board partners, but arent sufficient alone to support additional hardware options such as PCI-Express storage. The Platform Controller Hub therefore provides additional PCI-Express lanes to peripheral controllers.

In contrast to Intels 9-series motherboards Sunrise Point can supply up to an additional 20 PCI-Express 3.0 lanes, potentially resulting in double the bandwidth compared with the 20 PCIe 2.0 lanes of the previous generation. These new lanes augment the chipset storage options, most notably in respect to PCIe storage with many designs now featuring multiple next-generation storage options rather than a singular M.2 or SATA-Express port. Whilst not the low-latency connection you require for effective graphics processing, they will be more than suitable for new high-speed storage options including RAID for PCI-Express thanks to an upgraded DMI connection between PCH and CPU.

Further augmenting the platforms storage capabilities is the adoption of new Intel Rapid Storage Technology protocols allowing PCI-Express storage to be used as caching drives for slower media. Potentially still a niche technology, the stark benefits of next-generation SSDs over mechanical drives as well as future SSDs could be just the breakthrough Intel RST needs to capture mainstream adoption.

In an additional change from the 9-series motherboards support has been added for up to 10 native USB 3.0 ports and 14 USB 2.0 ports, with a maximum of 16 ports in some combination thereof. It should be noted that so far as we can tell USB 3.1 isnt actually native to the Sunrise Point chipset. Implementation is up to motherboard vendors through 3rd party controllers, and its to their credit that many have adopted the new high-speed standard without any fuss. For some both USB 3.1 Type-A and Type-C connectors are available, with Type-C the most common otherwise.

Those who make use of on-board CPU graphics can now enjoy support for up to three digital display outputs, or make use of the Intel 530 Graphics capabilities in tandem with discrete graphics. Microsoft Windows 10 (via DirectX 12) includes new options which allow disparate graphics hardware to be used in tandem, making best use of processing power where possible. Even without this, the transcoding capabilities of Intel QuickSync make it a tempting proposition for fast and efficient h.265 encoding and decoding, even if your discrete graphics hardware is formidable.

With unchanged support for six conventional SATA III storage ports, Intel 10/100/1000Mbps Ethernet, Intel Audio options and comprehensive UEFI BIOS options, Sunrise Point (and by extension all Z170 motherboards) are choc-full of features. Thats not to say that there arent some omissions  lack of native USB 3.1 support being the most obvious, whilst native U.2 connectors are a premium feature supplied by board partners  but as a whole the platform is a significant step forward overall.