👤by David Mitchelson  Comments 📅29-05-20
Conclusion
At its core the Taichi is a great motherboard that represents the best of what ASRock has to offer for the new Intel 10th Gen and Z490 platform.

We really like the styling on this motherboard and that it asserts itself with quite a unique livery which helps to set it apart from other models. There is a tendency for different motherboard designs to be indistinguishable as the neutral themes are favoured by all manufacturers.

Across Taichi there is a strong feature-set with stacks of storage accommodation, whether that is SATA or PCIe M.2. Were very pleased to see that USB 2.0 has been phased out of the back panel configuration and on offer are USB 3.2 Gen1/2. ASRock has moved things up a notch and incorporated USB 3.2 Gen2x2.

Taichi is the first motherboard weve seen for this generation which includes active cooling for the VRM configuration. As you can imagine, having cooling fans around the CPU socket increases overall system noise and, well, we expected it to dramatically improve thermals and they were just OK. It is the chipset heatsink design which presented us with a cause for concern, the physical design of the middle M.2 slot on Taichi means that if you want to access this slot, you will need to remove the entire heatsink from the Intel Z490 chip. Not only is this cumbersome and awkward (cannot be performed having the motherboard installed inside a computer case) it disturbs the thermal pad sitting over the chipset and if the screws arent tightened properly, could cause a negative impact on the thermal performance. ASRock should avoid pairing up M.2 cooling and chipset cooling. 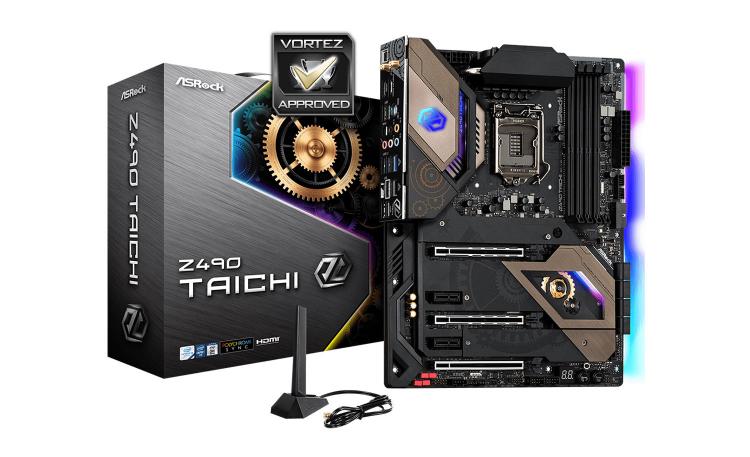 In terms of overall performance ASRocks Taichi performs very well and overclocking is a particular strength. Like other motherboards we were able to achieve the 5.3GHz milestone across all 10-cores, but the difference in ASRocks favour was that we only needed 1.3v running through the 10900K to hit this result. Other Z490 boards require more, resulting in higher temperatures, but with the 10900K in our Taichi board, the temperatures remained around 80 degrees which is a fantastic achievement!

Although this is a flagship model for ASRock, we were surprised to learn that the listing price is set at: GBP £377 | USD $369 | AUD $689. For this pricepoint we do expect a Thunderbolt port, or at the very least a Thunderbolt header and provided adapter/device but this isnt supplied.

The new Z490 Taichi is a solid motherboard which offers a good assortment of features, performs very well and is a strong contender in the overclocking field.