👤by David Mitchelson  Comments 📅12-04-21
Conclusion
Having observed a good handful of Intel Z590 boards recently, we feel were in a good position to assess which options are good and bad. The Taichi falls into the good category.

ASRock has redesigned this seasons Z590 variant of Taichi and we like the fruits of their labours. It carries through a distinct design and is appealing. For those with an affection for RGB lighting, this need is well-catered for with integrated illumination as well as ample RGB headers to extend lighting.

At the high-end of the Intel Z590 range, the assortment of motherboards tend to offer similar feature-sets but the Taichi steps away from the crowd to offer up Thunderbolt 4 and were really impressed they decided to include this. This technology futureproofs the motherboard and gives access to 40 Gbps storage bandwidth. Taichi also delivers plenty of USB 3.2, up to three M.2 slots and of course PCIe 4.0 functionality (provided a Rocket Lake CPUs is being used). 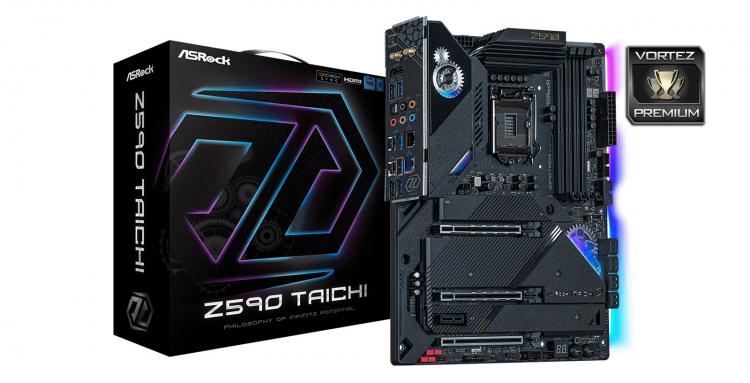 In regards to performance, Taichi provides some great results with figures matching similar offerings. There were however a few results to keep an eye on  this motherboard consumes the most amount of power of the selection of Z590s weve tested and the VRM temperature exceeded 100C under severe load.

We have already established that our Intel Core i9-11900K has an all-core maximum overclock of 5GHz (with 5.3GHz bootable but not stable) and Taichi managed to hit the milestone of that 5GHz with 1.35v  this is a decent result and showcases how

Taichi is ASRocks top-end model and as such it comes in at a cost of GBP £395| USD $429 | AUD $699. This isnt the most expensive model out there but still warrants some serious consideration.

Looking for a high-performance motherboard to pair up with a Rocket Lake CPU? The Taichi delivers on features and performance!