👤by David Mitchelson  Comments 📅25-04-12
Conclusion
Last year I had the pleasure of publishing a review of ASRocks Z68 Extreme4 Gen3. Not only was I impressed with this motherboard from a review standpoint but I liked it so much that it formed the foundation for my own personal rig and I have been using it ever since. You can attribute no greater praise, than from personal recommendation!

So here we are again, but at the next stage in ASRocks development  this time with the new Intel Z77 chipset. The Z68 Extreme4 Gen3 set the benchmark  has ASRock built on success?

The answer is a resounding  yes! From a visual perspective the aesthetics are once again eye-catching and very unique. The black and gold theme continues with even further refinement, there is a fresh heatsink design, which personally I much prefer and to be honest with you I didnt think that the aesthetics on a motherboard could get any better. 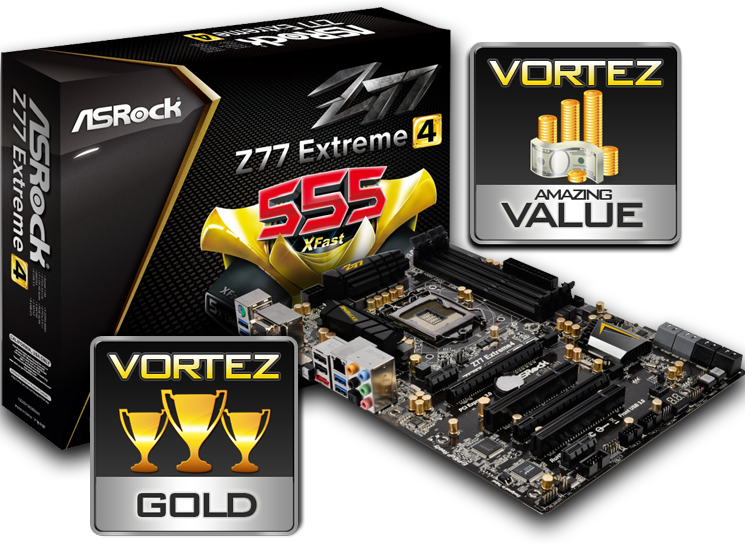 If the visual appearance doesnt concern you then maybe the features and performance do. The benchmarks on the previous pages proved that the mid-range Z77 Extreme4 can hold its ground against MSI and ASUS high-end offerings. Overclocking our Ivy Bridge 3570K to 4.8GHz demonstrated some key benefits across a variety of environments too, so its worthwhile pushing that frequency up  even if you dont move to Intel Ivy Bridge.

Its good to see that ASRock are thinking outside of the box with their product development too. Their new wave of Z77 motherboards come equipped with XFAST 555 which seeks to optimise performance for RAM, LAN and USB. These features do work and ASRock have set the foundations for some useful applications, it will be interesting to see where they will go with XFAST in the not too distant future.

The Z77 Extreme4 can be purchased for as little as £119. Taking a look at the current availability of Intel Z77 motherboards at popular etailers confirms that this motherboard is an absolute bargain and I would say  if you are on a tight budget then give this board some consideration, but even if you arent, you should certainly consider it anyway.

The only negative I have for this motherboard is that it slips outside of typical ATX specifications. Its 3cm thinner than a standard ATX motherboard and as a result may lack secure mounting on the far side since this isnt a common size, which also means you should be very careful when plugging in the 24-pin ATX motherboard power  as the motherboard may flex.

So ASRock have done it again with the Z77 Extreme4 and they walk away with Gold and Amazing Value awards... The looks are there, the features are there, the performance is there and the price is there. Go and buy one!

There are currently 893 user(s) online:
Google