To test for power consumption we take a measurement from the plug socket. It is important to note that the figures below represent total system power use and not just the GPU. The CPU was always in a fixed state (4GHz overclock) so did not affect the additional power load when the GPU was placed under 100% load using Furmark which was ran for 15 minutes at which point a load reading was taken. Idle readings were taken 5 minutes after system boot to ensure any background services and applications had loaded. 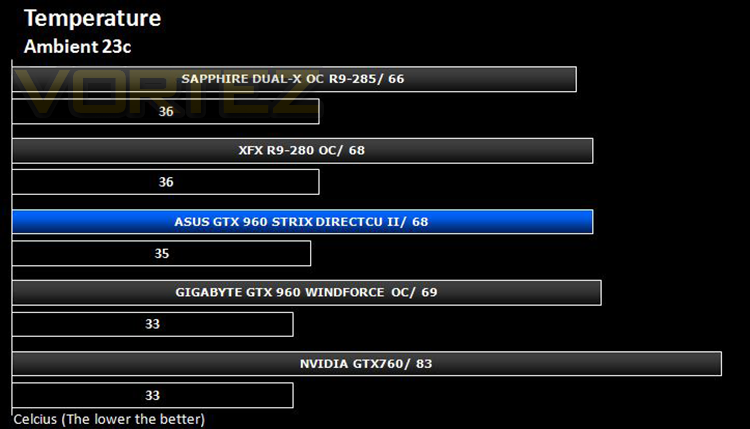 While tha vast majority of manufacturers ask us not to test a GPU using Furmark as it puts undue stress on the GPU and is excessive when compared to 'real world' gaming consumption. We however, like to explore the worst case scenarios and if a card fails this test then questions should be raised over the cards cooling/power management. Thankfully, the ASUS GTX 960 STRIX had no such issues here and hit a very low 223W.

To test temperatures we measured idle temperatures after booting windows, letting all applications finish loading and ran a few benchmarks. Once the benchmarks were complete we left the card to reach a cooling plateau where we then took the idle temperatures. For the load tests, we would normally run Furmark for 20 minutes, taking the absolute maximum temperature attained however we found that this throttled the card and resulted in spurious results. So we set Heaven running continuously for 20 minutes and used this as a temperature result as the card did not throttle with this application.

The DirectCU II cooler is one of the best on the market and that his proven once again here with temps barely reaching the 70c mark.

ASUS made a great deal of noise when introducing the STRIX models claiming that their coolers were 0dB*. The asterix/disclaimer is very important here because any item that moves air cannot claim to be 0dB. So while the card is idle then for sure, those claims may well be true but under most gaming scenarios, the fans will start to turn and thus create a measurable level of noise. We are however happy to report that you will REALLY struggle to hear the Strix above your own case fans, such is the volume level. A very quiet card indeed.