ASUS have always been at the forefront of innovation across their vast catalogue of computer hardware and components. We only have to look at designs such as the ASUS ARES HD5970 and their flagship Rampage III Extreme to grasp the level of technical expertise in the ASUS labs. The common factor distinguishing them though has always been their prices in the retail market. This has limited such products to the enthusiasts capable of digging deep into their pockets, if only for the sense of exclusivity amidst the performance and features offered by these high end products. But in many cases, ASUS have been careful in selecting some of their best innovations and trickling them down to mainstream consumers, whether it is in the form of better component usage or introducing features such as BT GO as found on their P67 line of motherboards. The graphics card we have for review today is an example of how their expertise in graphics card cooling is being brought to a wider audience. We have previously seen ASUS use their DirectCU coolers on a limited selection of mid-range graphics card such as the AMD HD6850 and the HD5850. The DirectCU coolers proved to be very efficient in terms of thermal performance and noise levels. Somewhat counter-intuitively in this case, ASUS have evolved on the technology to make it applicable to higher end graphics cards. The result is the new DirectCU II dual fan cooling solution. In its triple slotted form, ASUS have introduced the cooler to their GTX580/570s and their HD6970/6950s while its dual slotted form appears on the GTX560 Ti. The true innovation however doesnt lie in the cooler itself but in the use of Super Alloy Power, demonstrating their efforts at broadening their technology to the masses.

The graphics card we will be focussing our attentions on today is the HD6950, which we covered in great depth on release. The Cayman GPU that the card is based on features AMDs new refined VLIW4 architecture, boasting a total of 96 texture units, upgraded render back for improved anti-aliasing performance, and an enhanced tessellation engine. The HD6950 only features 88 of those texture units and 1408 stream processors out of a potential 1536 which the fully unlocked HD6970 sports. The main advantage is significantly reduced power consumption, making the HD6950 a very capable card.


ASUS have enhanced theirs by applying their standard 10MHz pre-overclock to their HD6950 and bundling their voltage tweaking SmartDoctor utility. The card ends up clocked at 810/5000MHz by default with a 2GB framebuffer on top for abundant bandwidth. Most notably are of course the brute looking DirectCU II cooler and the new VRM circuitry on their customised boards. To adhere to their overclocking pedigree, the HD6950 comes with a second 8 pin power connector rather than a 6 pin one for improved headroom. On initial impressions of this beast, it looks to be promising. 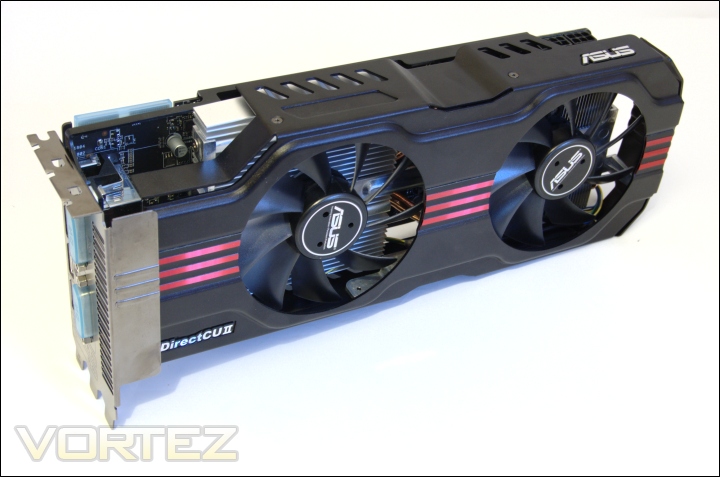 Lets see what ASUS has in store for us with their latest monster.