👤by Richard Weatherstone  Comments 📅15-06-11
Specification
Codenamed "Antilles", the ASUS HD6990, much like other reference HD6990's come equipped with two Cayman XT (VLIW4) cores, the same cores that make up the flagship cards siblings, the single GPU HD6970 and HD6950. Despite rumours of the HD6990 having to reduce its stream processor count to keep heat under control, the HD6990 has the full 1536 stream processors enabled per core. Each core is also married to 2GB of GDDR5 (4GB total), courtesy of Hynix.

With the optional AWSUM (read Awesome) feature disabled (more on this later), the cores are clocked at an impressive stock speed of 830MHz and while this is lower than the stock HD6970 single corespeed of 880MHz you have to bear in mind that with two of the cores running at an albeit lower clockspeed, they will kick out a serious amount of heat. Also running lower than the HD6970 is the memory speed which is set to 5GHz rather than 5.5GHz (effective). Slower speeds however are however more than compensated because of double the processing power and memory.

Considering that when in stock form this card will consume a very thirsty 375W, it is understandable that AMD have seen fit to lower the clockspeeds of both the 4GB of GDDR5 and the two Cayman XT cores. However, if you have a beefy PSU you can enable the AUSUM switch which will raise the clocks and inevitably the power consumption to an incredible 450W, breaking the PCIe specification. AMDs caveat to this infringement is to place a very large yellow sticker over the AUSUM switch, warning of the End of Days and the coming Apocalypse so to use at your own discretion. If like me, you never heed such warnings you will void the warranty of the card which could prove a very expensive mistake being that the card is retailing for around the £500 mark!

The PCIe guidelines make a recommendation that 300W is the safe maximum a card should draw from the PSU with an additional 75w being provided by the PCIe slot. As you can see in stock form the HD6990 is bang on the money for stock speed power consumption but hitting the AUSUM switch will mean that figure is increased by a potential 75w draw from the 2x 8pin PCIe power sockets with a combined draw of 450W through the 12v rail(s) of a PSU for graphics power alone! 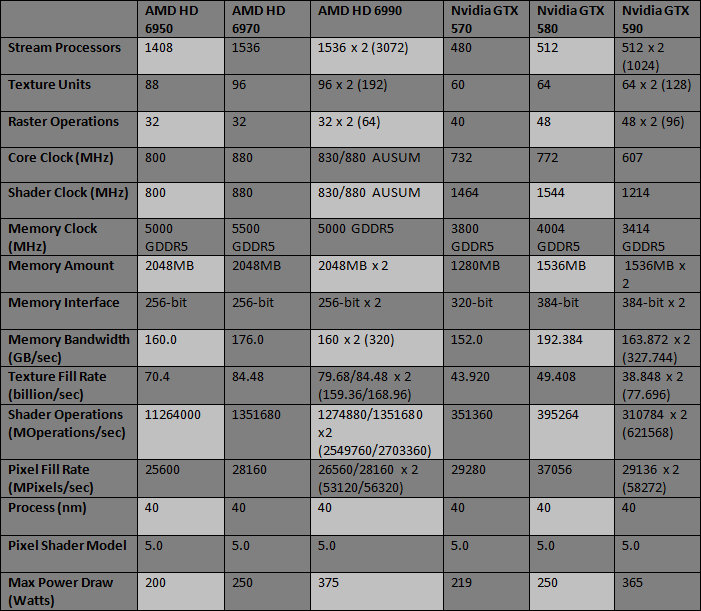