To answer the question posed in the introduction of this review: Clearly the R9-280X is a HD7970 beneath the skin. This is amplified by our set of benchmarks with the 280X scoring near identical results to the higher overclocked Club3D HD7970. However the R9-280X isn't a replacement for the HD7970 nor any other card any card in the AMD armoury. It is simply an answer to the NVIDIA opposition. Those looking to purchase a GTX760 would do well to consider this card as it clearly outperforms its NVIDIA counterpart. Not only this but it outperforms reference GTX770 cards and is on a par with the overclocked GTX770 editions. So while the R9-280X, and in particular the ASUS card we have sampled today may not directly replace any card in its current line-up despite being a HD7970 in disguise, it addresses the competition by offering a viable and worthy alternative thanks in part to the Tahiti core.

While the HD7970 will soon become end of line, the R9-280X seeks to expand upon the Tahiti core's lifespan. And why not, after all it is a tremendously powerful component. AMD will obviously face criticism for re-branding 2 year old technology and rightly so as we all love to gorge ourselves on new technology but this does not mean the 280X is a poor, re-hashed card by any stretch of the imagination. 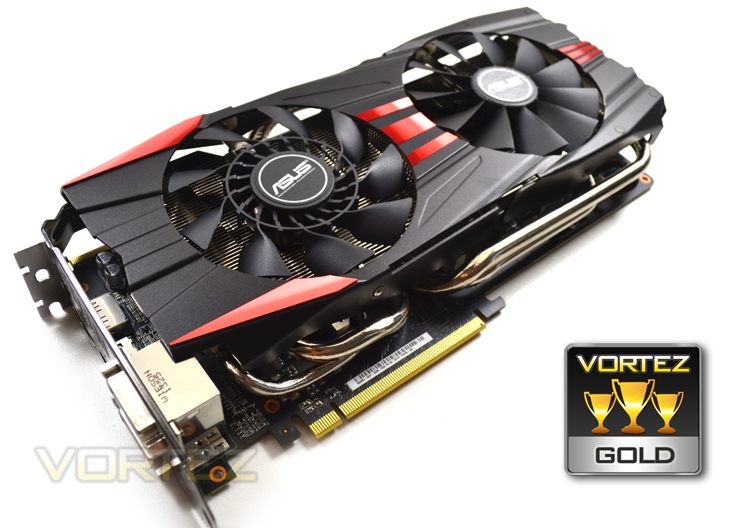 This particular variety from ASUS overclocks very well indeed, it is cool running, looks the part, uses less power than its HD7970 stable-mate and is also quieter too. What's not to like? While the price may be a little above the current HD7970 due to the heavy price dropping by AMD, it is still a competitive price, especially when compared to the NVIDIA GTX770. As shown by [H], it can also be crossfired with an existing HD7970 so if you are looking for an upgrade, don't go selling that HD7970 just yet because adding this GPU to your HD7970 will give you GTX 690/HD7990 beating performance.

We therefore feel, despite the lack of innovation by AMD on this particular GPU series, this card warrants our Gold award both for product positioning and price which are near perfect. Something which for a new release of graphics card is quite rare by today's standards.

To summarise:
The ASUS R9-280X DirectCU II TOP may well hide 'old' tech beneath the imposing aesthetics yet it is still a very high performing product which will serve any demanding enthusiast well at this price point.