Designed to push not only the boundaries of DirectX® 11.2 gaming, the GCN Architecture is also AMD's first design specifically engineered for general computing. Equipped with up to 32 compute units (2048 stream processors), each containing a scalar coprocessor, AMD's 28nm GPUs are more than capable of handling workloads-and programming languages-traditionally exclusive to the processor. Coupled with the dramatic rise of GPU-aware programming languages like C++ AMP and OpenCL, the GCN Architecture is truly the right architecture for the right time.

In simple terms, increasing the number of transistors in a GPU has a big impact on the potential performance of a graphics card-but transistors alone are not enough. It takes a truly great design, like the GCN Architecture, to effectively utilize that potential for real-world performance. 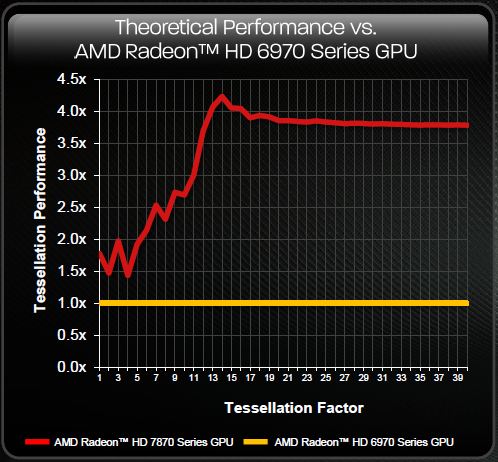 Below you will find just a few examples of how this truly next-generation architecture delivers on one very simple design goal: enable the world's most powerful graphics cards.1

Starting with GPU utilization, AMD has taken great strides to ensure that the GCN Architecture is capable of efficiently using its hardware resources. This seems like such a simple idea, but designing a GPU to frequently approach its peak theoretical performance is a challenge the GCN Architecture tackles with ease.

The GCN Architecture also benefits from dramatically improved tessellation performance. Games featuring this DirectX® 11 technology are considerably faster than they were on the previous generation of AMD Radeon products. There is also the new Mantle API which promises to dominate NVIDIA, especially in titles such as Battlefield 4. Project Mantle is one of AMDs most innovative and game-changing features, delivered with the Radeon R9 and R7 Series product line. Mantle is a new application programming interface (API), leveraging the commonality between the next-gen consoles and Radeon. It enables game developers direct communication to our GPUs, unlocking the true potential of GCN and resulting in significantly higher gaming performance at all segments. We will be looking at Mantle in a separate article but if what we hear is correct, Microsoft (who are responsible for DirectX) should be very worried. 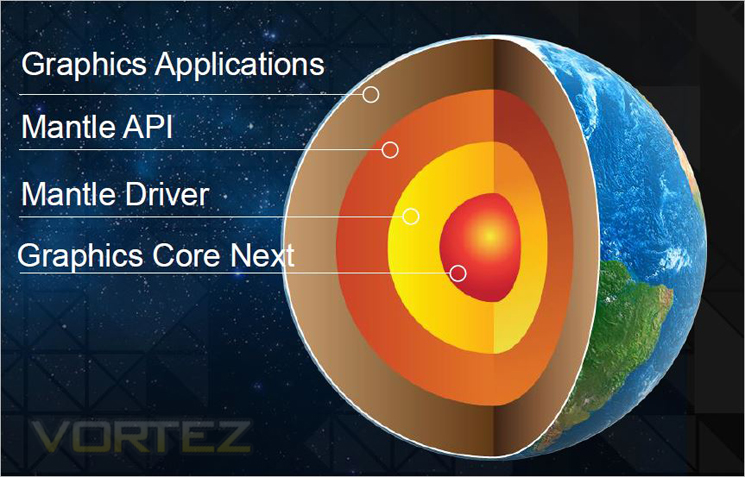 But performance is not enough for today's demanding gamers. Image quality, or the clarity and accuracy of textures and effects, is equally important. The GCN Architecture is equipped with three key technologies that dramatically raise the bar in this regard.

Partially Resident Textures (PRT)
Even in the latest titles, gamers may have noticed that games often re-use or repeat textures, particularly on the ground or in background scenery such as mountains or trees. This is because increasing the physical size or number of textures in a game can have a negative impact on the performance of a GPU. PRT is a radical new technology that hopes to break this cycle. 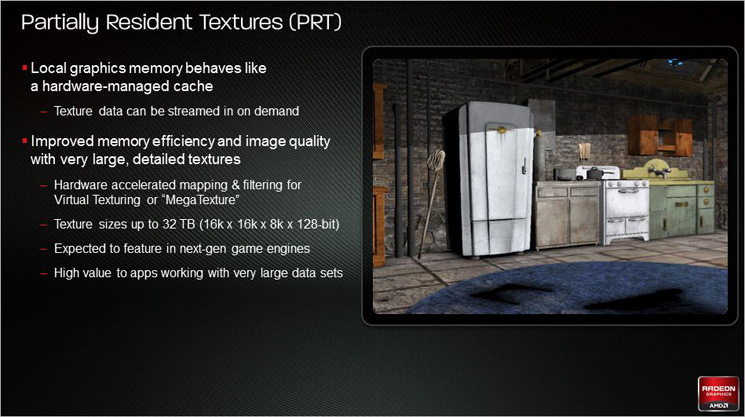 PRT can utilize absolutely enormous texture files, up to 32 terabytes large, with minimal performance impact. PRT accomplishes this by streaming small bits of these massive textures into the GPU as needed, giving compatible games a virtually endless supply of unique texture data it can apply to the game world. The GCN Architecture in 28nm AMD Radeon products is the first GPU design to feature a hardware implementation of this technology.

Available on every modern GPU, anisotropic filtering is a technique that assists the GPU in making sure textures in your favorite games remain razor sharp, even at a distance. Most games now offer the ability to enable this feature, and the AMD Catalyst driver suite has long provided players with the option to force enable anisotropic filtering for all of their games. 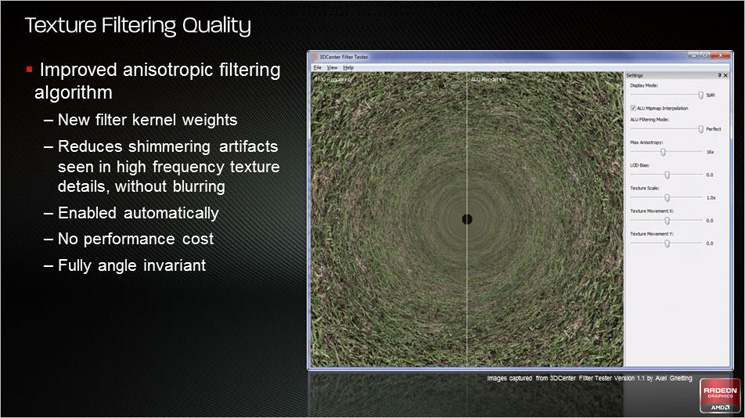 Where every GPU design differs, however, is in the way the anisotropic filtering is actually executed. The GCN Architecture has been specifically optimized to produce superior results when AF is enabled.

Improved anisotropic filtering in products like the AMD Radeon HD 7900 Series ensure gamers get sharper, better textures when this technology is enabled.

Improved DirectX® 11 Tessellation
As DirectX® 11 titles become more mature, game developers are naturally pushing the envelope of realism by utilizing a greater degree of special rendering effects. One such effect is tessellation, which can dynamically generate additional detail in a scene on the fly.

A wireframe scene of a rally car in DiRT 3 driving through water. On the left, notice there are no ripples. On the right, after tessellation, there is new and dynamic detail in the game.

As with anisotropic filtering, tessellation is not new to GPUs, but the manner in which tessellation is executed can have a large impact on the gaming experience. Because of this, the GCN Architecture has again been optimized to deliver up to 4x the performance of the AMD Radeon HD 6000 Series in heavily-tessellated games.