👤by Richard Weatherstone  Comments 📅12-02-12
Overclocking
The ASUS Rampage Extreme uses a BIOS that is perhaps one of the best we have seen yet. Being UEFI is has a very attractive GUI which is both intuitive and despite the huge array of options, not initially overwhelming. I say not initially as once you get past the basics, which in the face of it are more advanced than many standard motherboard BIOS systems, the Rampage BIOS soon opens up a wealth of options enough for the most extreme of tweakers. 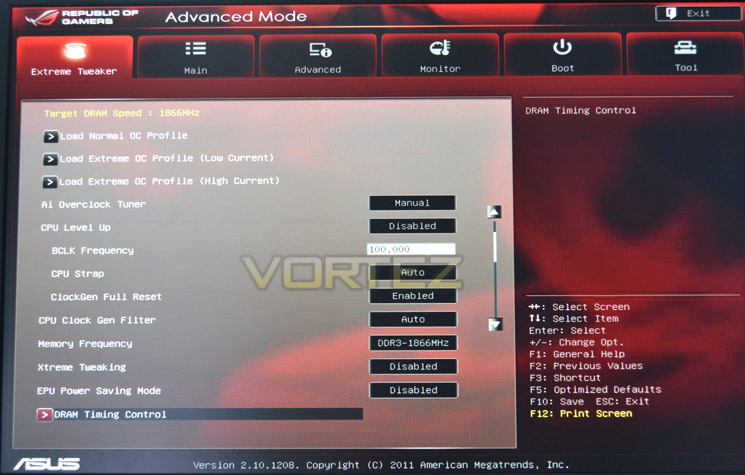 The BIOS is controlled by the mouse, keyboard or a combination of the two. Each option requiring a numerical value can be entered manually with the keyboard or can be adjusted using the mouse buttons and scroll wheel. You would think that setting up the BIOS is a very simple affair then. For the most part this is true as most of the options allow for an AUTO option so for people new to overclocking or those just wanting a simple overclock, the ASUS engineers have done all of the hard work for you. However, if you begin to stray too far from the path, ASUS have also given you a reminder that you are increasing voltages to dangerous levels by colour coding the values, black, yellow purple and red - black being safe through to red being the most dangerous. I must stress at this point that the voltage ranges on many of the options with the Rampage extreme are so varied that one can easily destroy a component if they are not careful despite the safety reminders ASUS have implemented after, this is an 'Extreme' motherboard.

If you are the more advanced/experienced overclocker then dare I say you too will be overwhelmed by the sheer amount of options available. While the standard layout of controls will be familiar, many of the options bring up a sub menu of options that are simply mind blowing and will no doubt have overclocking forums discussing and deciphering for months. That said, ASUS do afford a basic description of many of the new overclocking options in the sidebar, particularly the voltage adjustment options in Digi-Power which are very useful for extracting the very last drop of performance from the CPU/mainboard. The manual too will become dog-eared as it will no doubt be used for a reference guide during those head scratching moments of frustration when you seemingly 'hit the wall'.

Once you have BIOS setup just how you want and your tuned overclock dialled in the fun does not stop there as when you get into a windows operating environment ASUS allow further adjustments using the much improved AI Suite: 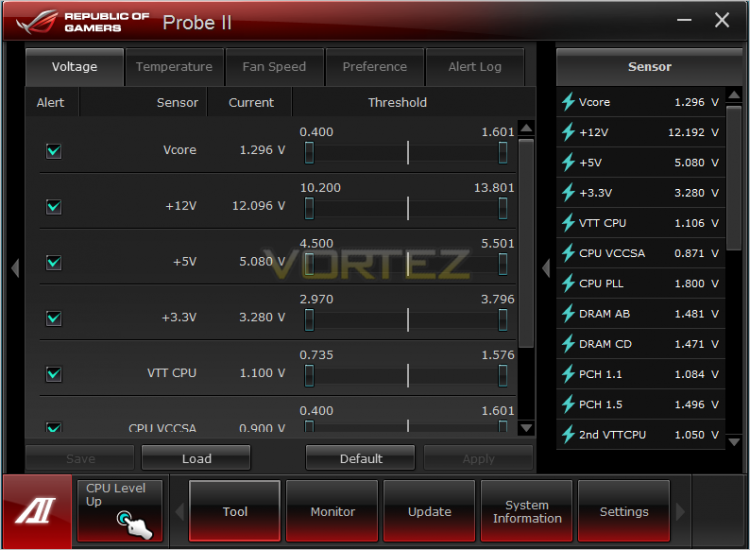 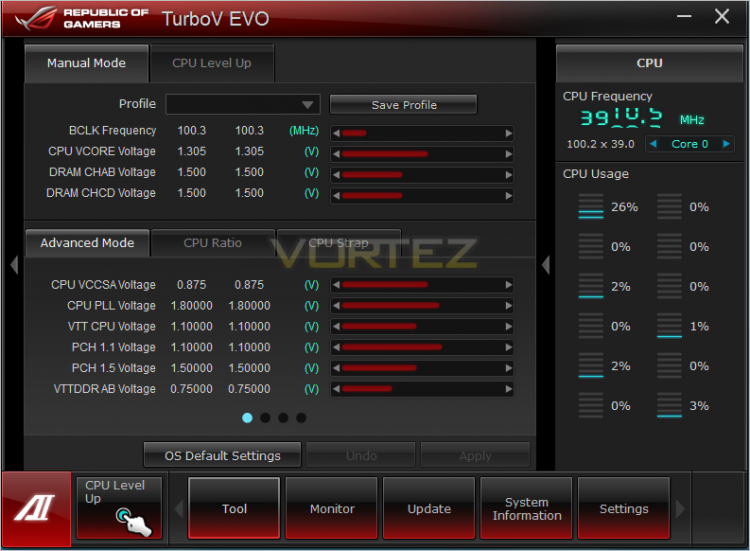 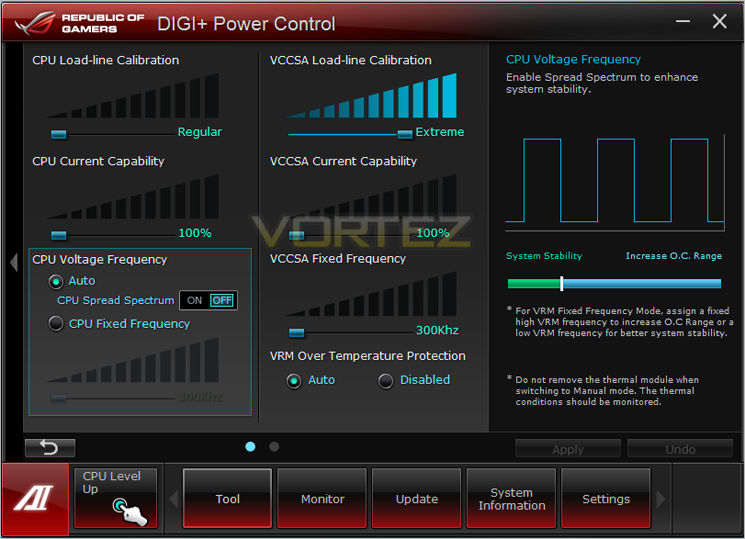 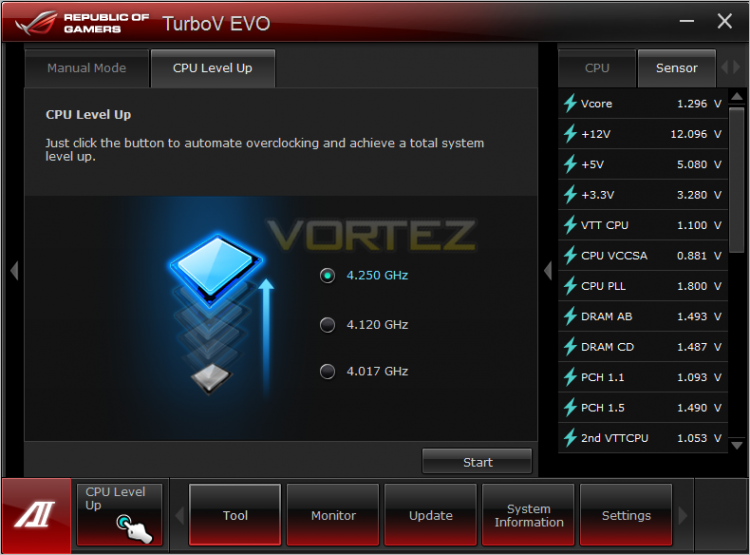 The AI suite offers many of the BIOS options but this very useful utility allows for fine tuning 'on-the-fly' as the settings are adjusted in real time and do not require a reboot save for memory/cpu strap adjustments. The GUI is once again very easy to follow but I would advise caution in believing some of the unrealistic CPU temperature readouts as the ASUS PC Probe software reported temperatures that were 8c lower than both Core Temp and Real Temp utilities. I did find however that the tool allowed me to get a little further in Windows with my overclock than I could with the BIOS alone and because it requires no reboot, a lot of testing can be done without having to wait for the system to boot to find an overclock that is both efficient and powerful, striking a balance between power consumption and performance. 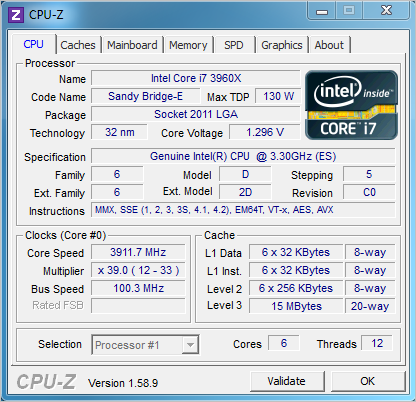 At default settings (Turbo enabled), the ASUS Rampage clocks the CPU up to 3.9GHz which is great for those looking for a boost in power and I would certainly recommend having Turbo enabled as it gives you the power when you need it and the voltage reduction (cost saving) when you don't. However, as we like to keep things on the level playing field, for our run of benchmarks we disable Turbo and run the CPU at a constant 3.3GHz to ensure there are no anomalies in our results.

We now know that our CPU is capable of breaking the 5GHz barrier and it can be stabalised at this speed with our favourite overclocking motherboard, the MSI Big Bang XPower II so the ASUS Rampage IV Extreme has quite big boots to fill if it is to compete. 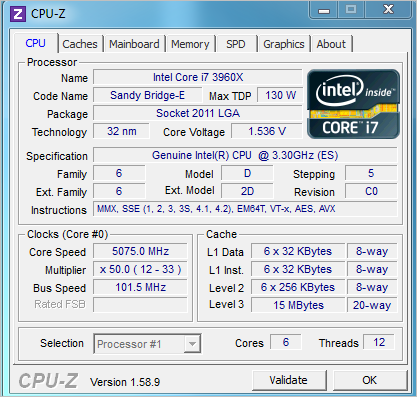 ...and fill them it does! Reaching the exact same overclock as the BIG Bang XPower II, using the exact same voltage, the ASUS Rampage IV Extreme equals our best overclocking result on the X79 chipset. Initially, the CPU did not like the 50x multiplier but thanks to the varied amount of options offered by the ASUS BIOS, forcing the CPU to play ball was actually an enjoyable affair as some options helped the overclock, some made matters worse but rather than being frustrated by the lack of progress, I was intrigued by the wealth of options and there effect they had on the CPU overclock. 5GHz is a phenomenal result in anyone's books and I was very pleased but I couldn't help feeling there was a little more left in the tank so to achieve the 5.075GHz screenshot above, AI Suite's TurboV EVO tool was employed which allowed me to nudge the baseclock up in increments of 0.1MHz. This fine tuning allowed our very maximum overclock to be achieved.

Overall then the ASUS Rampage IV Extreme is an overclocking delight. A motherboard that has all of the tools you could ever want to extract the ultimate in performance from your CPU. Believe me when I say that if you cannot get the maximum from your CPU with this mainboard, then you will not get it with any other. Sure this motherboard has many options available and this will tempt you to tweak more than you normally may but isn't that part of the fun? Isn't it better to have those options available? How many times have you sat reading overclocking forums wishing your motherboard had that CPU strap option or you wish you could adjust that particular voltage. This motherboard will have many users who do not have this mainboard very, very jealous!