👤by Matthew Hodgson  Comments 📅05-10-17
Performance Testing
The 17 frame is a wise choice from ASUS ROG, it evidently leaves plenty of space for decent cooling, which was demonstrated during the temperature tests; the cooling on the GPU is especially impressive, maxing out at 69°C during the toughest of benchmarks.

Unfortunately, the exterior of the laptop doesnt look or feel that great, with it being made largely of plastic that looks to imitate aluminium. The overall build quality is good enough, but you wonder how it may fare after a few months/years of use. The plastic on the lid is already showing signs of scratches and swirls. The orange accents are also an acquired taste, to say the least.

The 1080p display, married with the GTX1050 is a great match; the GTX 1050 isnt the strongest GPU on the market, but its much more energy efficient than the likes of the 1070 and 1080, this allows a reasonable level of image quality while gaming, but also makes a session of an hour or two possible without a plug socket to hand. The display is bright and produces colours well with bright greens and oranges popping from the screen. Despite the 1080p resolution, the screen is still sharp due to the 17 monitor size.

Speaking of gaming, the keyboard, with the white border around the WASD keys is obviously aimed at the gamer, but those who wish to type out a few emails or use the laptop for general work purposes shouldnt be put off, the scissor-switch keys feel incredibly good to type on, providing ample feedback with a quiet action. Theyre backlit, too, so late night sessions arent a problem at all, however, per-key backlighting didnt appear to make it into the budget so youve only got 4 zones to play with. 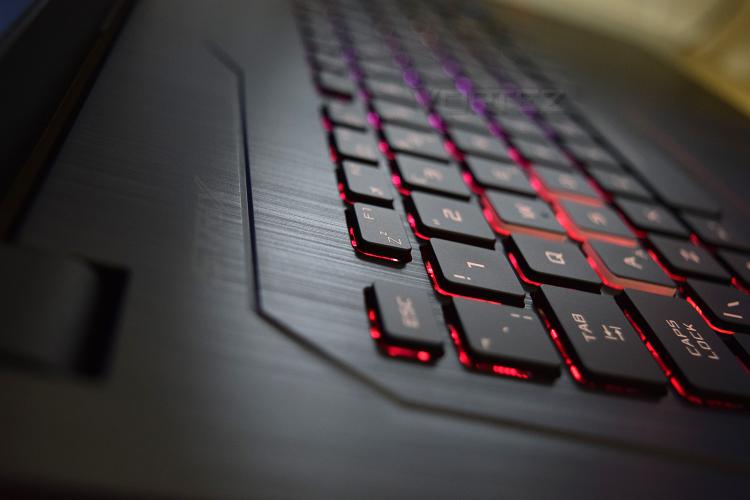 The trackpad, as is usually the case with a laptop, leaves a lot to be desired, but it will get the job done when a mouse just isnt available. The trackpad features multi-touch to make scrolling and zooming etc more easily accessed but a separate mouse is advised.

Wireless and wired network performance was good, but nothing to write home about. Providing youre within an acceptable range of the nearest WiFi Access Point or plugged in via the RJ45 connection, you should have no issues.

Due to the laptops 31mm thickness, theres plenty of space inside for some reasonable speakers, which provide a surprising amount of volume without the usual tinny sound you come to expect; the handy 4-pole 3.5mm jack on the side is useful for a gaming headset while minimising wires. Unfortunately, ASUS seems to have made the decision to use the front portion of the laptop for all of their connectivity, which makes a tidy desktop much more difficult to achieve; we find that, at the bare minimum, the RJ45, a couple of USBs and the power connector should be on the rear edge, behind the screen.