👤by Matthew Hodgson  Comments 📅05-10-17
Conclusion
A laptop of this kind must be considered with price as a top priority, which at £999 from many different retailers, lands at a fairly palatable amount. Weve recently seen some laptops begin to tickle the £2500 barrier which makes this seem like quite the bargain. That being said, for only a couple of hundred pounds more, there are some much more capable laptops out there, equipped with a GTX1060 and sometimes even an i7 processor.

The ROG GL753VD is a capable laptop, both in general use with a great battery life and in even the most demanding of games, though you will have to drop the image quality somewhat (entirely expected from a sub-£1000 gaming laptop). The keyboard feels excellent, as does the trackpad for browsing the net or flicking through an Excel spreadsheet.

Temperatures were kept under control remarkably well from the single fan, which also remained surprisingly quiet even under load.

Its evident through the entire testing process that ROG have removed features to keep the cost down, but their choice of including an optical drive is, odd. Considering the expense required to source the drives, manufacture their enclosure and not to the mention the space required inside the chassis. Who watches films on optical media anymore? We feel this is by far the strangest decision theyve made with this laptop.

All things considered, the Republic of Gamers have put together a tidy little package with the GL753VD but we cant help but think that stretching your budget that little bit further could grab something much more capable. 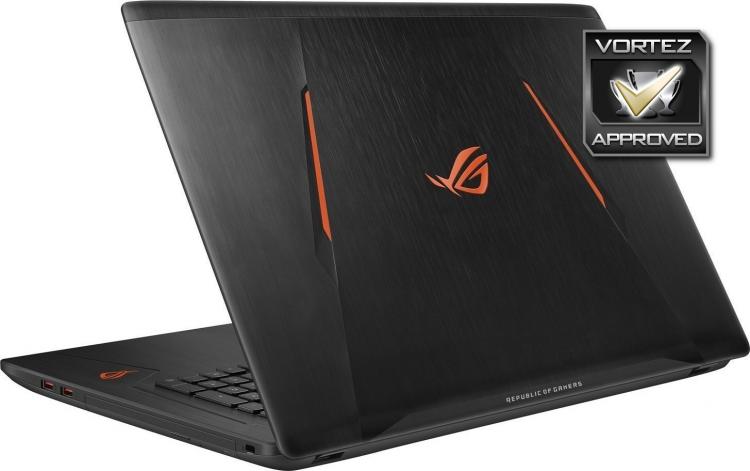 The ASUS ROG GL753VD is capable of gaming at 1080p, but is also ideal for office applications or watching movies, making this a relatively cheap, well-rounded laptop

Neutral
+- The styling is a little garish

Cons
- Doesnt have per-key backlighting
- Poor placement of connections
- Who is the optical drive for?