👤by David Mitchelson  Comments 📅05-10-17
Conclusion
Prior to the release of todays Z370-F Gaming, ASUS re-adjusted their motherboard lineup, highlighting that there would now be two tiers within the ROG portfolio. The Z370-F Gaming slots into the lower of the two tiers, but does not shy away from delivering up some of the features which avid ROG fans have been accustomed to in the past.

Taking Z370-F purely on the appearance, we are met by a visual masterpiece. Of the Intel Z370 motherboards weve seen so far, this one here ranks as the best looking. ROG has refined the overall theme by adopting a monochrome style which is simple but effective. Due to the razer sharp aesthetics, were able to match up other hardware like graphics cards and memory easily. Where other brands have fully indulged in the current RGB craze, ROG has steered clear by opting for just a single lighting strip on the rear IO and headers on the board and it works well.

As well be seeing with many Intel Z370 motherboards, the Z370-F utilises dual-M.2 slots, however ROG has cleverly designed a handy heatsink towards the bottom of the board. Blending into the Intel Z370 heatsink design, this thermal tool is designed to bring down the temperatures of M.2 drives which do not have their own heatspreaders. Of the solutions weve seen which offer M.2 cooling, this one appears to be the most carefully crafted  it even supports drives which are 42mm, 60mm and 80mm. 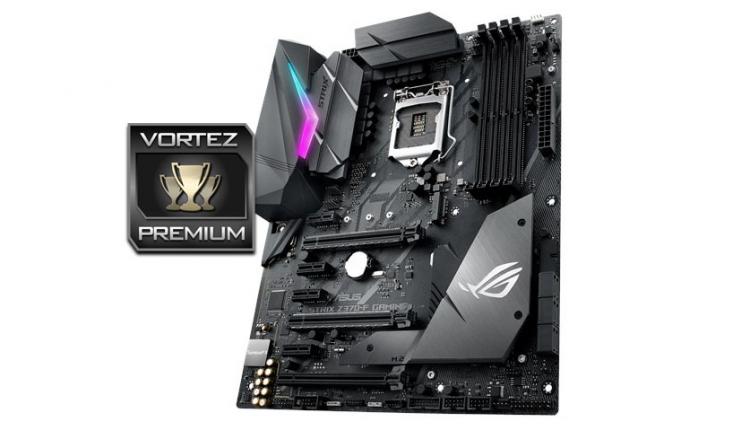 ASUS 5-way optimization continues with the Z370-F, blending together tools which are able to enhance the overclocking experience. Those who are wanting to manually tweak the performance of their system can do so easily thanks to the intuitive UEFI BIOS  where you can fine rune a wide array of options including fan profiles.

Moving onto the performance, we experienced a strong offering in the Z370-F. Throughout the range of tests we ran, this motherboard performed consistently well. Our efforts in the overclocking department were not disappointing either. Z370-F managed to shift up to 5GHz which is our current milestone with the 8700K.

Audio is another strongpoint for this ROG motherboard as it arrives with SupremeFX. In the past weve praised ROGs labours in the sound department and once again we arent left discontented. All of the included components fused together to create a solid audio solution with little need for an independent sound card. So, for those wanting to upgrade to Intels 8th Generation should regard the ROG STRIX Z270-F as an ideal candidate to base a system around.

ROG STRIX Z370-F sits a £189 GBP / $200 USD. Though this is a mid-range offering, were almost stretching into the realms of the high-end at such a cost. With some ROG features omitted, no USB 3.1 header, this motherboard should be somewhat cheaper.

The ROG STRIX Z370-F is another visual masterpiece and thankfully it isnt just style over substance either. Throughout this board we have a solid lineup of enthusiast-grade features which mark this solution out as a great choice.