👤by David Mitchelson  Comments 📅08-12-17
Conclusion
Motherboard options for AMDs Threadripper/X399 platform remain somewhat sparse, with even a major player like ASUS only releasing two in the months since its launch. This likely shouldnt be seen as a reaction to the capabilities of the platform, but rather a relatively small user-base which cannot at the moment justify the scores of SKUs you expect from a more mainstream segment. The Zenith Extreme targets the premium end of even this rarefied spectrum of users, and we urge you to approach it through that lens.

With that caveat out the way, the ROG X399 Zenith Extreme is unlikely to disappoint anyone who chooses it as the centre-piece of their AMD Threadripper system. Charged with producing an AMD alternative to the X299 Rampage VI Extreme, the Zenith pushes the boat out with an immense feature-set to rival any motherboard on the market today, and surpass the vast majority of them. Whether it be overclocking support including DDR4-4000 MHz memory (with validated modules), on-board features or even RGB LED lighting, no aspect is left unaccounted for. 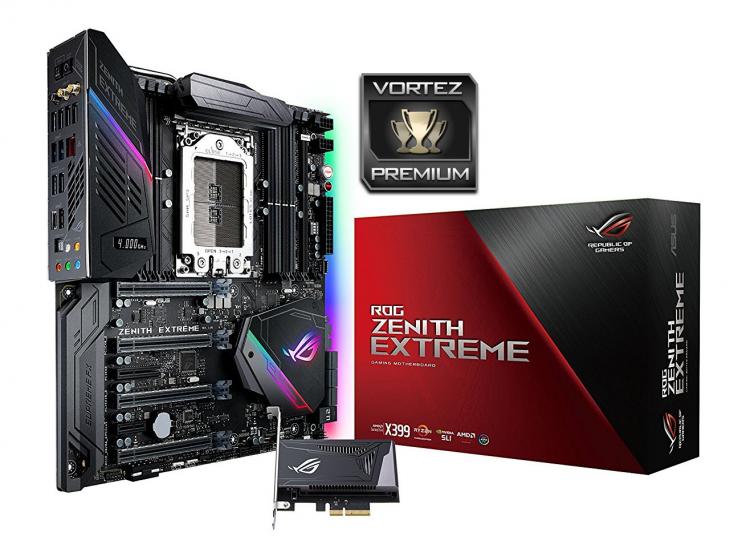 Perhaps the most impressive aspect of ASUS ROG's design however is in tailoring its capabilities to those of the X399 chipset and Threadripper CPUs. This goes far beyond simply providing eight memory slots and four long PCI-Express slots, and also includes support for 4-way Multi-GPU x16/x8/x16/x8 configurations as well as triple-M.2 storage support.

The use of space is also worthy of a call-out. Their DIMM.2 innovation has been a feature of other ROG motherboards, but remains one of the best ways to add M.2 slot support (for long drives) without taking up valuable motherboard real-estate. Thats even more important on this motherboard given the sheer size of the TR4 socket, and is backed up by the positioning of a further M.2 slot under the ROG logo next to the SATA storage ports.

In fact, when it comes to the physical aspects of the Zenith Extreme, our only real concern of note is the reports of problems with the TR4 socket/mounting mechanism itself. We had no particular issues with our sample, and in all likelihood flaws are being filtered out as the platform matures, but the issue remains a concern. Its noteworthy however that the Zenith is hardly unique amongst X399 motherboards for which this is a problem, and both ASUS and retailers have tended to be understanding with consumers encountering it.

We would also be remiss in not mentioning overclocking. Despite the relative immaturity of Threadripper ROG have made pushing the platform to the limit a breeze thanks to intuitive software and plenty of protection just in case you push a little beyond. Our testing allowed us to surpass the 4GHz barrier, and more expert overclockers equipped with the new TR4-specific cooling solutions will almost certainly advance further in short order. Furthermore Threadripper thrives on fast memory, and with 3200MHz+ support out the box - as well as 4000+ available in OC modes - the Zenith allows you to maximise performance beyond a laser focus on core clock speeds. This will however require suitable memory, so approach accordingly.

Although not captured in our results, we have to say that on-board VRM cooling proved to be excellent on this model. Given the concerns over the initial batch of Intel X299 motherboards, its reassuring to see such accomplished VRM cooling on X399, even if it does take a small fan to really achieve it. That fan may however be unnecessary for day-to-day running at reference speeds, so feel free to disable it at those times if its distracting.

As with all things Threadripper, the platform should only really be on your radar if you have a particular need for the multi-core horsepower it can bring to bear. More, much more than gaming, you will want to be encoding video, streaming, and otherwise mega-tasking that system beyond all measure to really justify investing in it over (for instance) a Ryzen system. That said, youre likely to find no better motherboard to help you leverage that horsepower, nor one that will have all the possible features you want now or in the future.

At £500 inc. V.A.T. the ROG Zenith is certainly at the premium end of the AMD X399 High End Desktop motherboard market, but it is choc-full of features from 802.11ac WIFI to RGB LED lighting, and is an extremely robust overclocker with great stability. If Threadripper is the only game in town and you have deep pockets to match extreme performance, the ROG X399 Zenith Extreme is surely the motherboard for you. The ASUS ROG X399 Zenith Extreme nets a well deserved Premium award!

- Price
- Early adoption of a new platform
- RGB LEDs that synchronise with other ROG products
- Lingering concerns surround the TR4 socket (as with other manufs.)

Other Points:
- Consider the ROG Strix X399-E as a more affordable option

There are currently 257 user(s) online:
Google