👤by Matthew Hodgson  Comments 📅22-01-19
Performance Testing
ASUS present the TUF Gaming K5 as a gaming keyboard with gaming Mech-Brane key switches, so the gaming performance will be under proper scrutiny here, though ASUS also claim that the keyboard makes no compromise on performance and offers exceptional durability so well look at those as well.

First and foremost, after testing the keyboard in some common titles, we find that the keys dont feel anything like a mechanical keyboard, and are a much worse attempt than both Razer or ROCCAT managed. The 3.7mm travel is much further than any mechanical keyboard weve used and is noticeable when compared. There is a tactile bump feel to the key switches, but the bump isnt the point where the press is recognised so is somewhat pointless in its design; the key still needs to be bottomed out to be registered. Theres also the issue of the keys sounding like a mechanical keyboard, but only if you stuck your fingers in your ears; a kind-of muffled click is the best way they can be described. However, even though the noise sounds muffled, that doesnt mean theyre quiet. Theyre more noticeable than a proper mechanical keyboard due to having to bottom-out the key for it to be registered. Overall, were not impressed by these Mech-Brane keys, at all.

Getting by the Mech-Brane claims that ASUS make, the keyboard is otherwise good for gaming. The 24-key rollover ensures keypresses are registered properly every time and the 1000Hz polling rate enables quick reactions in twitchy games.

The built-in wrist rest helps to improve comfort when gaming and typing, though a solid piece of plastic isnt ideal. Wed much prefer to see some kind of soft leather or foam of some kind, though that would likely increase the price somewhat. 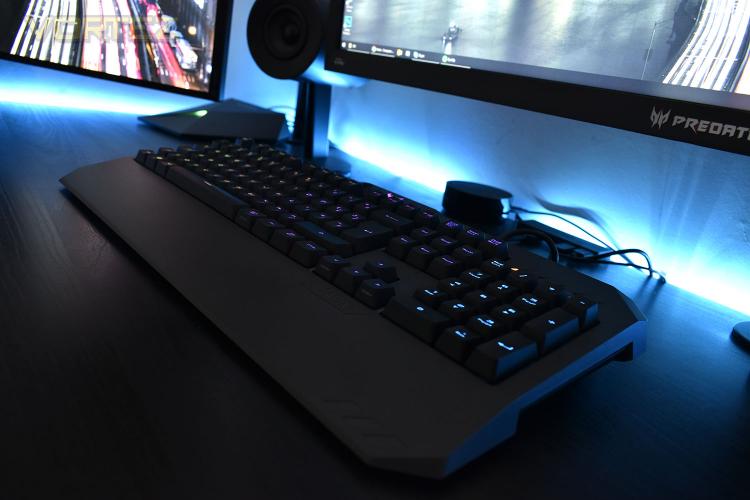 The ROG Armoury software allows you to allocate keys a different function other than what their face would suggest, but with more and more of us listening to music while using our PCs, that isnt an ideal way of introducing media keys. Play/pause and backwards and forwards are almost a must-have in todays market and to see them missing from a keyboard costing £70, even in the form of a Fn key shortcut, isnt acceptable. The volume keys go some way to make up for this lack but were still not over the moon about it.

Build quality, something which ASUS usually excels at, is fairly poor in this example. The all-plastic construction leads to the keyboard feeling light and flimsy with a lot of body flex even when just typing. Slightly more expensive keyboards with a metal backplate are considerably nicer to use. However, one aspect we cant realistically test in a short period of time is the longevity of a keyboard, which is where the TUF Gaming K5, ASUS claims, is designed to shine. ASUS has apparently tested the keyboard against liquid spills, but the keyboard is only rated to spill-resistant from up to 60ml of liquid; unless youre constantly drinking out of the bottom of a tin of fizzy pop or a small glass, the likelihood of more than 60ml of liquid being spilled is high.

Finally, onto the RGB lighting. The ROG Armoury, once youve launched it, allows customisation of the colours, but only on a per-keyboard basis. Therere no individual options for the RGB backlighting. One of the endearing features that RGB lighting can bring is being able to illuminate only the keys youre using in your favourite games, helping to focus your playing somewhat so thats another mark down for the K5. Having said that, the RGB light is reasonably vibrant and does a good job of illuminating both the letter/number and the second function of the keycaps.