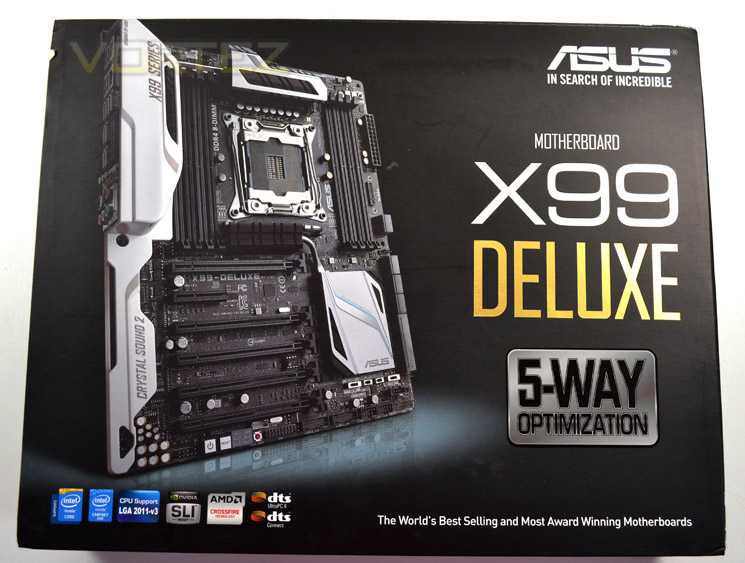 Its interesting to contrast the X99-Deluxes packaging exterior with that of the recently reviewed MSI X99S Gaming 9. Whilst the latter puts branding front and centre, hiding away the motherboard, the X9-Deluxe emphasises the sexiness of the electronics on display, showing that its not just another cookie-cutter mainstream design.
The colour scheme matches that of the board inside, focussing on black and white with a hint of gold trim (as seen on the capacitor tops). Other manufacturers have tended to choose an almost dolly-mixture-esq combination of colours, so its nice to see ASUS have confidence in their chosen livery.
As we always like to see, fundamental compatibility information is clearly displayed on the front. Also mentioned are the dts-audio support, sure to be of interest considering that this is the fully-featured model. 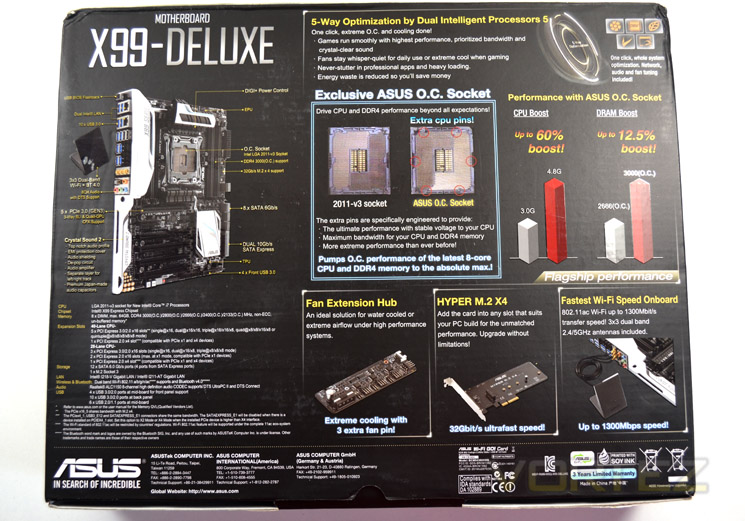 The bottom is very much the business end of the X99-Deluxes packaging; ASUS have made this side extremely dense with detailed information on the motherboards feature set. Included are the much trumped OC Socket and 5-Way Optimisation, whilst M.2 X4 and Wireless LAN compatibility via an adaptor are also not hidden away.

For many just picking up the product on a shelf there could be some information overload, but anyone without easy access to the Internet when theyre purchasing will find almost every scrap of information they need. 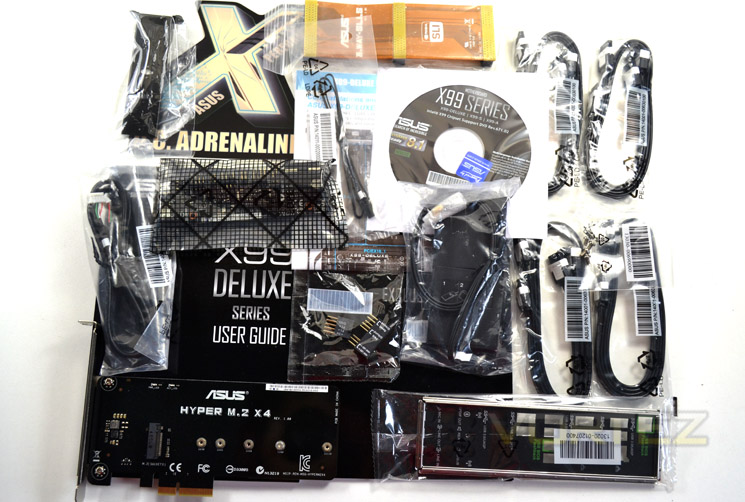 Comprehensive is certainly the word when it comes to the X99-Deluxes accessory bundle. In addition to the necessities  the ASUS I/O shield, M.2 bracket (with black PCB!) and user manual  ASUS have also included enough SATA cables for 8 discrete drives, an SLI bridge for multiple NVIDIA GPU systems, and a driver/utility disc set.

But thats not all. The Deluxe model has an integrated wireless networking module which is augmented by ASUS 3T3R dual band Wi-Fi antenna antennas thats compliant with all common 802.11 standards including ac. Fan control is aided by a fan extension card and 5-pin to 5-pin cable, adding three 4-pin PWM headers with sensor-based monitoring through software. And of course Thermistor cables are also included for temperature monitoring.

Deluxe? Wed say so. The full accessory list is below: