Demand for game capture cards has steadily grown over the last few years as emphasis on sharing gaming content has expanded. In the world of the gaming capture card there are two big players  Elgato and AVerMedia. The chance to innovate in this field doesnt swing by very often but today AVerMedia have a new product which delivers a step-up from their existing capture devices.

Weve been using AVerMedia capture cards for many years now on our YouTube channel, to record gameplay and actual performance footage for our laptop reviews, graphics cards and more. These devices work flawlessly and we can confidently recommend them. We use the Live Gamer Ultra and Live Gamer Extreme. 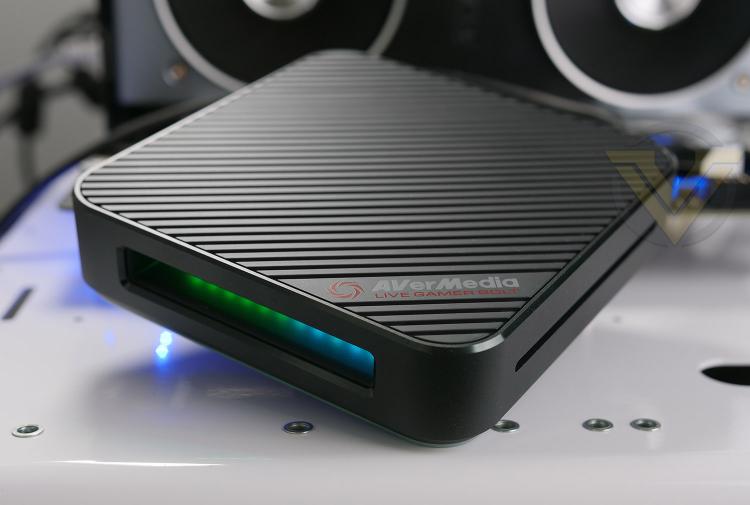 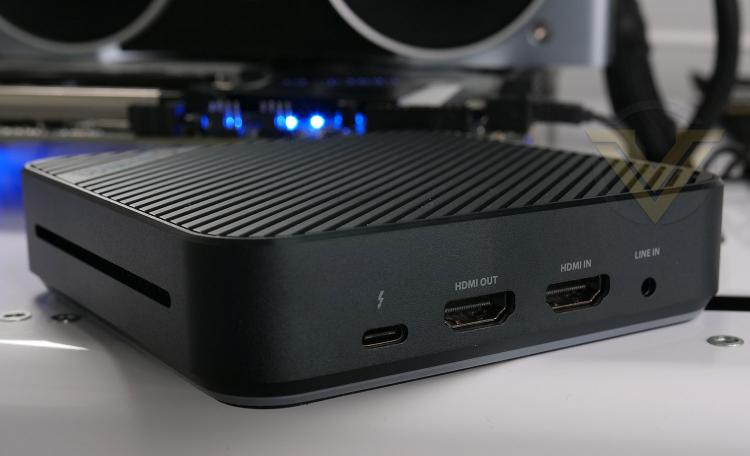 4K60 via a capture card isnt anything new for internal capture cards but for external devices 4K60 with the added bonus of HDR has been hindered due to connectivity bottlenecks. GC555 aka Live Gamer BOLT overcomes the difficulties and setbacks that USB presents and instead opts for Thunderbolt 3. While this standard is an excellent choice for providing the capabilities/bandwidth to handle such a demanding task of 4K HDR, many motherboards simply lack Thunderbolt 3 support  this tech isnt widely adopted even by Intel-based systems but AMD users will find only a few motherboards supporting Thunderbolt 3 or may even need to hunt down an add-in card to be able to use Bolt.

There is only one side which features ports for connectivity, on this edge we have Thunderbolt 3 (Type-C), HDMI 2.0 Out, HDMI 2.0 In and Line In. AVerMedia provides a HDMI 2.0 cable, 3.5mm audio cable and Thunderbolt 3 cable within the bundled accessories  meaning you can get up and running with this straight away!

While 1080p60 recording isnt hardware intensive, 4K60p HDR or even 1080p240 requires the following hardware specification (as listed on the website):

So, the configuration of your computer definitely needs to be taken into account before purchasing BOLT, and furthermore, Thunderbolt 3 compatibility should also be considered.

It should also be noted that BOLT isnt designed solely for PC capture/streaming but can be attached to a console too which is ideal, given that upcoming, next-gen consoles are destined to support 4K60 HDR. 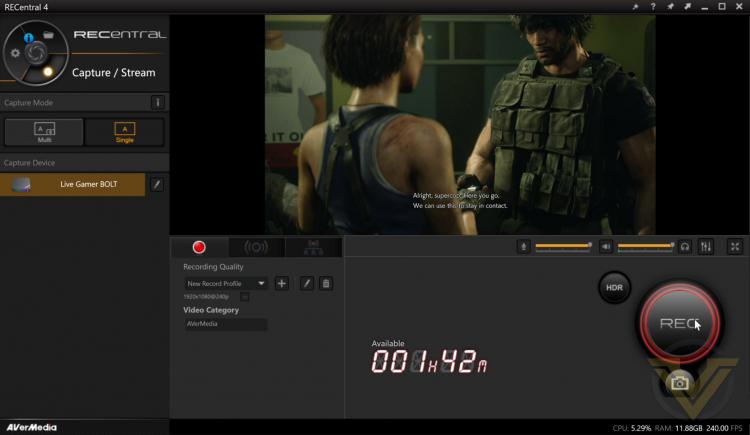 BOLT, like other AVerMedia devices arrives with RECentral software which is the companies in-house streaming/capture software. Again, weve been using this software for many years and it works very well for recording gaming footage. Inside the software suite there is the option to stream, record and organise content. For Twitch users, this might be something of interest as you can create Scenes and modify layouts for your feed. You can also manage things like Chroma Key for webcam capture.

BOLT also fully supports other software such as XSplit or OBS. Just connect up the unit via the Thunderbolt 3 cable and the card will be visible under the recognised devices.

It is necessary to install two drives prior to being able to use this capture card  Your motherboards Thunderbolt 3 driver and AVerMedias BOLT driver. While Duplicate displays inside Windows 10 will provide an interface with the source machine, choosing Extended will ensure proper functionality.

In order to test BOLTs capabilities we needed a game capable of HDR. There arent a huge selection of such games - HDR compatible games. We decided to go with Resident Evil 3  a game released just a few weeks ago. Below is a video demonstrating 1080p @ 240 fps, with and without HDR. As you can see, enabling HDR really makes the colours pop, crushes the shadows and enhances the overall look/feel of this type of game.

There is no denying how astounding AVerMedias new external capture card is, but The arrival of Live Gamer BOLT will place this new device into a niche based on some of the technical requirements.

Thunderbolt 3 is a necessity  finding a motherboard with designated TB3 ports can feel like a lengthy crusade. There are just a small handful of boards which offer this, thankfully we had the GIGABYTE Z390 Designare on-hand to be able to properly test out the functionality. There are other options such as add-in cards, but they can be quite expensive. TB3 can obviously tap into higher bandwidth and is essential to transfer the data between devices when 4K HDR and 240 fps are involved  its definitely a good move by AVerMedia as more products will support this standard going forward.

Another thing to factor in is the technical specifications for the machine to which BOLT will be capturing to  adequate CPU, memory and a high-performance GPU are necessary.

Taking the hardware requirements into consideration, BOLT is a unique device which certainly pushes the boundaries in the world of external capture cards. In the past, AVerMedia has kept their asthetics fairly modest and made use of plastic for the enclosure but BOLT has been given a noticeable facelift with a solid, metal outer shell and lively RGB LED lighting.

Admittedly, BOLT wont be for everyone and this is why the launch of this new card doesnt necessarily make any of the other Live Gamer units redundant as such. At a cost of UK £399 US $449 is on the pricey side, considering the Ultra is almost half the price.

If youd like to see Live Gamer BOLT in action, be sure to check out our YouTube channel. Going forward into 2020, all of the gameplay footage in graphics card/system reviews will be using Live Gamer BOLT.

Live Gamer BOLT steps forward into new territory, making what was once impossible now possible. If you need to stream/record 4K60 HDR or 1080p 240fps this external capture card is what you need!

There are currently 853 user(s) online:
Google