Memory is a key component of any computer system. Without it the PC simply will not work. In years gone by memory was simply exposed chips on a green PCB but the advent of overclocking and faster, more powerful memory kits, heatspreaders soon became the norm with manufacturers adding bigger and bolder designs with every release. Many may claim that a heatspreader on a memory kit is simply not necessary however, it is also said that the colder a module runs, the more likely it is to stand the rigours of time and as with all things 'overclocked', the colder it is, the better it overclocks. Whichever side of the fence you sit on, you are forced to agree that a module with a heatspreader attached offers more protection and certainly looks better than a bare module. 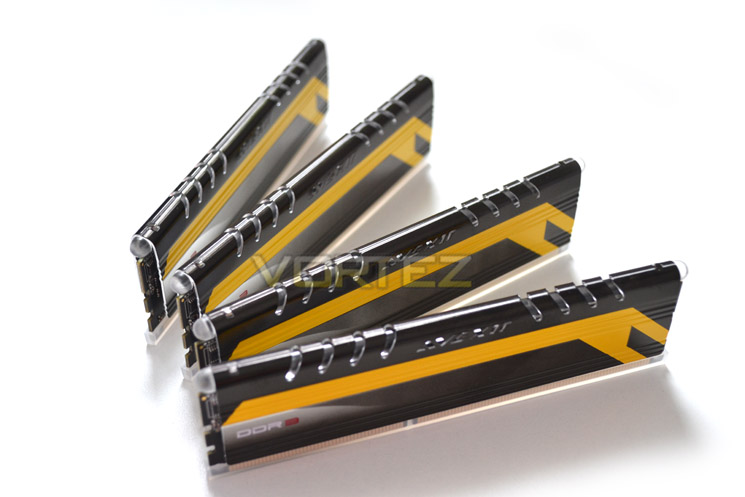 The kit we have for review today is based upon the Core range, the difference being that the MPower kit has, as the name suggests, a colour scheme synonymous with the MSI extreme range of components, also known as MPower. Perfectly matching the MPower range of MSI components, it will certainly appeal to those who have some of these units already installed in their system. The striking yellow and black design is instantly recognisable in daylight and if you have your kit hidden behind a smoked perspex window then the pulsating amber LED's should be enough to give the game away. This on looks alone appears to be one serious memory kit indeed.

Looks however we have found are often skin deep so we will be throwing this 1600MHz kit into a mix of 1866MHz, 2133MHz and 2400MHz kits to see how it fairs. You will however be happy to know that 1600MHz is only the base kit with speeds available all the way up to 2666MHz. All the MPower modules from AVEXIR to the MSI MPower Extreme performance components are available from our friends at Overclockers UK.

OCUK on the AVEXIR MPower series:
Avexir Core Series is designed specifically for the extreme power users who focus on challenging the excellence in high performance gaming experience. The Core Series is developed by Avexir R & D team with 10+ years experience of researching in memory core technology and designed specifically for the power users and gamers who demand ultimate performance and extreme reliability gaming modules.

Mpower series is designed to be a perfect visual match for MSI Mpower mainboards and certain models of Asrock mainboards, giving you a look which shall make you the envy of all your friends.

Avexir strictly adheres to quality standards set by JEDEC (the Joint Electron Devices Engineering Council) and ISO9001. With 100% hand-tested extensively in multiple PC major-brand motherboard environments at its rated speed, Avexir makes sure that both stability and performance of every memory module reach the highest quality criteria.