👤by Matthew Hodgson  Comments 📅14-05-19
Conclusion
be quiet! aim to be a big name in the cooling industry, and as their name suggests, keeping things cool while keeping noise to a minimum is their biggest goal. As we saw last year with the Slims bigger brothers, they performed remarkably well on both fronts, so how did the Slim perform?

Starting with installation, the only slightly fiddly part was reattaching the Silent Wings 3 fan, though this was hardly a hardship in our chassis, we can imagine it would be a little tricky in a smaller case, however. Though, having said that, this installation method is fairly standard across a lot of manufacturers.

Moving onto its performance, as is evident in the graphs, the cooler is very quiet, both at idle and load, especially considering the heat its dissipating from our Intel Core i7 3930K, at stock and overclocked. While acoustics are very good, the thermal abilities of the cooler, which we believe are largely down to the small stature of the cooling tower and the inclusion of only one fan, take a bit of a hit, particularly when the CPU is overclocked. While considering this, please bear in mind that our processor is rated at 135W at its stock clocks and that rises to around 170W with our 4.4GHz overclock; this can really be considered a worst case scenario for the cooler, compared to an Intel 9700K or an AMD 2700X, for example, which are both around the 100W TDP range.

Aesthetically, we love the all-black design. It should fit into most cases without too much trouble and the colour scheme is unlikely to clash with anything, though it has to be said that while all of that may be true, the Dark Rock Slim wont really add to the style in your case. If youre aiming for an understated look, or you havent bought into the tempered-glass cases yet, you wont care for that anyway. 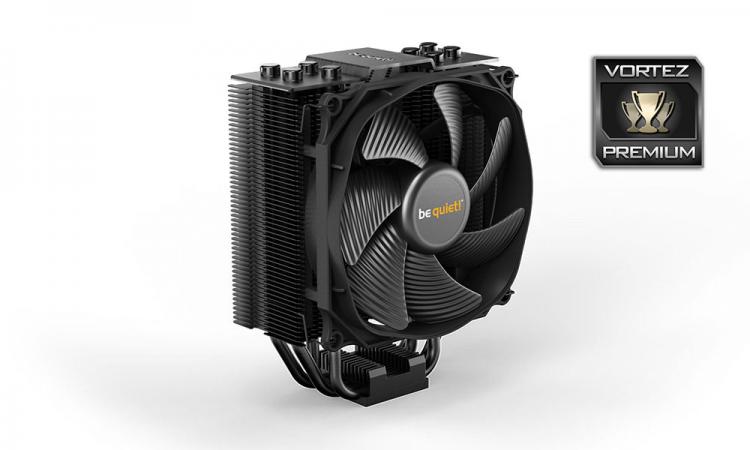 Acoustics are excellent but, as is to be expected from a smaller cooler, the thermal ability lacks a little on our 135W/170W TDP CPU. At £55 in the UK, its certainly worth a look.

Cons
- Struggles with higher TDP CPUs
- No rubber strips on the reverse side for an additional fan, despite providing the clips