As most of us are aware, Blue Microphones are one of the stand out companies when it comes to selecting a microphone for either streaming, YouTube or recording vocals. The usual hot picks are either the Blue Yeti or Blue Snowball. The Yeti is the more pricey of the two and boasts the better specifications and sound whereas the Snowball is cheaper and favoured by those who are looking for an affordable solution that is still highly impressive. But, what about if you want to step up your audio game and cant quite stretch to the Yeti? Well, Blue might just have what youre looking for with their new Yeti Nano, and today well be putting it through its paces.

The Blue Yeti Nano is Blue Microphones latest creation, and it looks to bridge the gap between the Yeti and Snowball. The Yeti costs £115 ($129 US / $187 AUS), and the Snowball is priced at £60 ($65 US / $99 AUS), so the Nano fits right in the middle - in terms of price at least. But, what about specifications? Again it sits right in the centre offering some features the Snowball doesnt and omits some from the Yeti. Where the Nano does see the biggest improvement over both the Yeti and Snowball is with the recording sample rates, as is, both the Snowball and Yeti offer 16bit / 48kHz. The Yeti Nano though beats them both with a 24bit / 48kHz sample recording rate which matches that of the Yeti Pro.

Looking solely at the Yeti Nano now and it has some impressive attributes of its own, one such feature is the inclusion of a zero-latency 3.5mm port for monitoring your audio in real time. It also boasts an impressively wide frequency range pickup of between 20Hz to 20kHz as well as dual condenser capsules, a multifunctional volume control dial and an impressive SPL of 120dB. 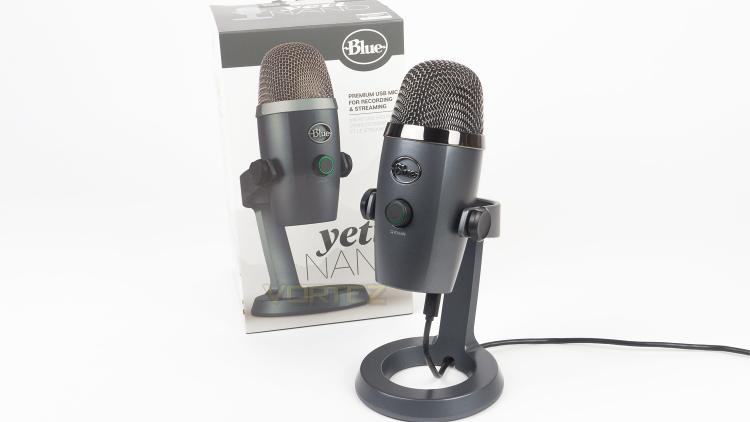 Blue Microphones on the Yeti Nano:
Yeti Nano is a premium USB microphone designed for broadcast-quality podcasting, YouTube productions, game streaming, Skype/VoIP and voiceover work. Inspired by the #1-selling Blue Yeti microphone, Yeti Nano features 24-bit sound quality, a compact design, and plug n play operation for instant streaming with your PC or Mac. The premium finish looks great on camera and on any desktop. With a no-latency headphone output and controls for headphone volume, mic mute and pickup pattern, Yeti Nano is the essential mic for todays broadcasters.