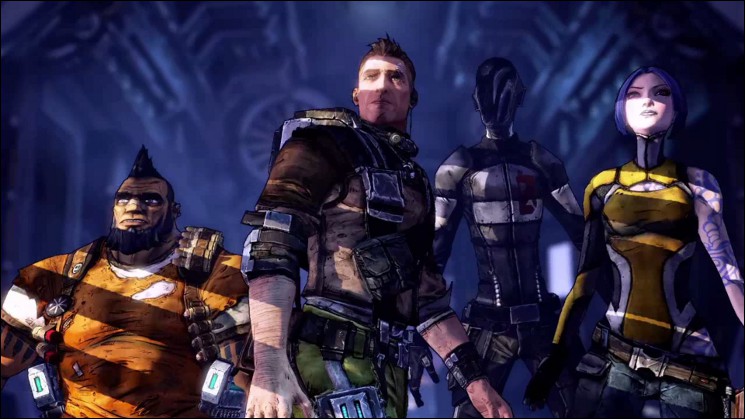 The Cutscene animation style is representative of in-game graphics

That seems to be the thought process Gearbox went through in creating Borderlands and its sequel. A rare form of cel-shading style graphics are the order of the day, making it look like no other RPG or FPS currently on the market and easily distinct from those who strive for photorealism and high graphical fidelity.

The parts of Pandora we see evoke the Borderlands concept strongly, and if the game was a movie it would be described as a heady mix of Wild West Frontier and Mad Max anarchy. Coupled with an excellent soundtrack, the game rarely drops this old-world pretence, even whilst the player takes out flaying machines with electrically charge rocket-launchers, and exemplifies the idea that it's possible to build a story around fairly broad thematic strokes, even in video games.

Geographically, Pandora is split into regions with multiple entrances, exits and a fast travel node; navigating between locations is quick and easy when the previous title's DLC was not. Whilst diminishing the feel of an open world, the system allows regions to be visually distinct and would let Gearbox expand Pandora relatively easily with post-release DLC. On the other hand, as a consequence many areas which look accessible are walled off, in some cases with invisible walls, breaking immersion and making you feel a little penned in at times. To combat the limited size of many regions most also have a longish linear underground dungeon, the traversing of usually being the objective of a quest issued by one of many NPCs. 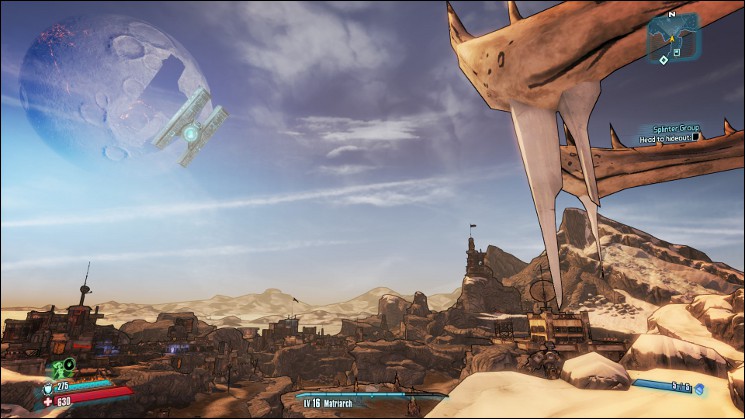 Yes, that ship is casting a huge shadow on Pandora's moon.

So, we have the world of Pandora, but it's not a realistic world in any visual sense thanks to that cel-shaded and certainly not when compared to high-quality Modern Military Shooters such as Call Of Duty. But lack of realism doesnt mean poor graphics - the style remains is consistent throughout the game with high-detail textures you could put up against many Triple-A titles released on PC in the past few years. The game, within its own unique aesthetic, looks amazing and in no way feels cheap or dumbed-down.

Borderlands 2s graphics arent only defined by this style however. Dynamic night/day lightning make the worlds almost garish colouring pop when it could otherwise be disjointed or ugly, and just looking up will show one of the most beautiful sky-domes ever created. Seeing the Hyperion capital-ship in orbit fire onto Sanctuary for the first time is an almost perfect video-game moment not tied to a cut-scene.