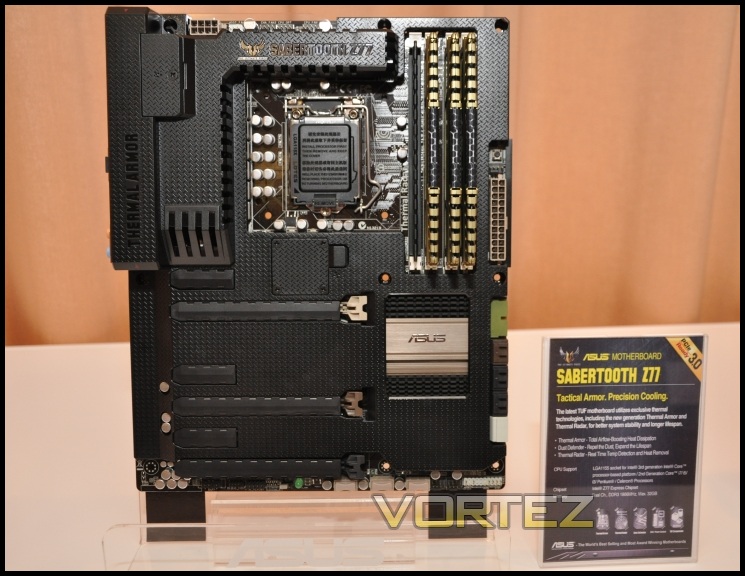 The Sabertooth Z77 returns with the unique thermal armour, intended to direct airflow over the board independently from the thermal environment in the immediate surroundings, this time however, when compared with the P67 version, we see placements for two 50mm fans for intake and exhaust. The motherboards slots and headers are covered by 'dust defenders' while exposed parts keep in theme with previous colour aesthetics. 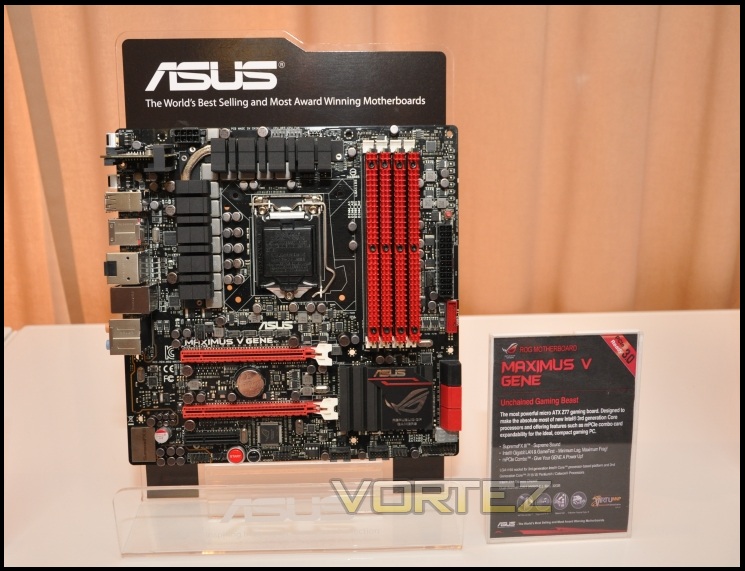 The worlds most powerful mATX gaming board, only an ASUS GENE could claim that title, featuring the SupremeFX III audio system that is shielded from EMI and has a fancy red lighting to prove it so. The expected overclocking features are present and we see an innovative mPCIe combo riser card allowing the installation of a mSATA or mPCIe device such as an SSD or Wi-Fi/Bluetooth modules. 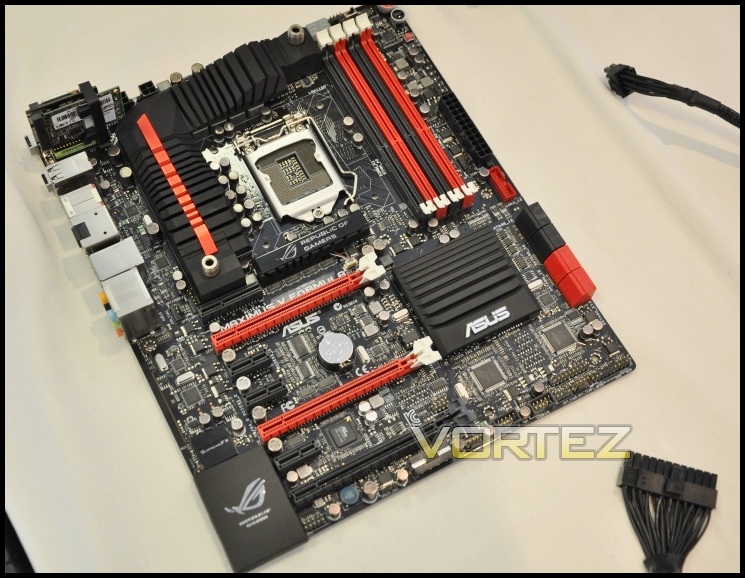 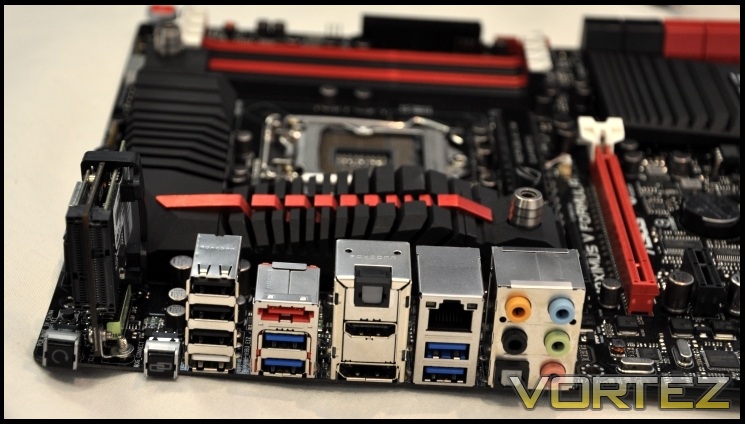 The Republic of Gamers Maximus V Formula features a neat 'Fusion Thermo system', which can be used passively with built in heatpipe or can use the integrated water channel for water cooling. Also features the new SupremeFX audio system, however the whole audio circuitry is cut off and isolated from the rest of the motherboard. We again see the mPCIe combo riser, four DDR3 DIMMS supporting upto a max of 32GB at 2600MHz (OC), dual x16 PCIe 3.0 slots (in dual x8 when both in use) an open ended PCIe 2.0 x4, three PCIe 2.0 x1 slots, and a physical PCIe 2.0 x16 (electrical x4) slot. The rear I/O is similar to the Gene with the addition of a display port. 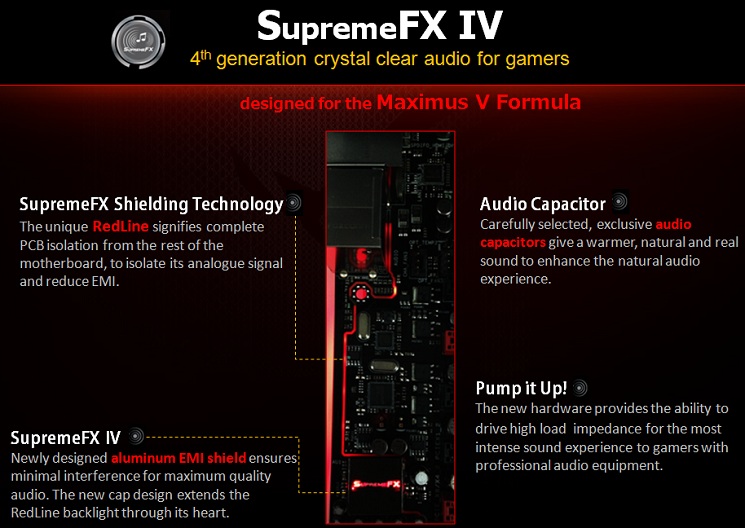 It is clear, that since GIGABYTE released their G1 Sniper series which focused heavily on delivering an outstanding integrated audio package, ASUS have called game and focused heavily on their
SupremeFXIII audio system on the Maximus V series. 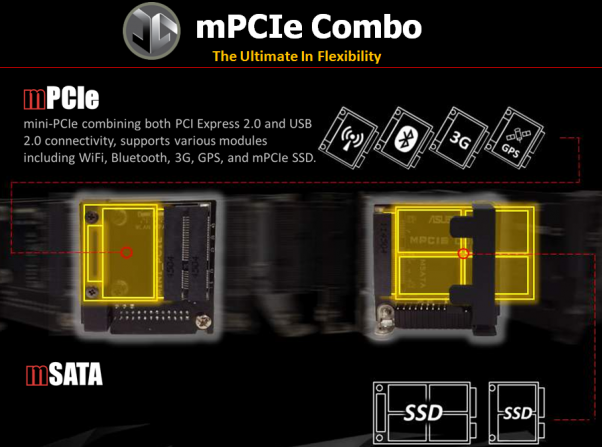 Also the mPCIe addition, not only innovative, but offers a new dimension to how consumers use their motherboards. Like with all flagship products, if this feature proves popular it is likely that we will see such a thing filter down onto more mainstream products. 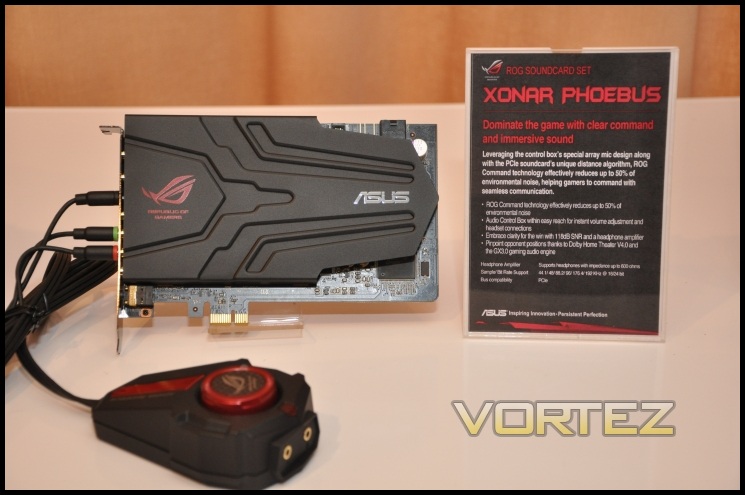 Finally we take a look at the coming discrete sound solution from ASUS, the ROG Xonar Phoebus. Featuring ROG command technology which allows the reduction of environmental noise by 50% as well as featuring a headphone amplifier, clear and 'dominant' sound are on the menu.