The Vortez team were lucky enough to see GIGABYTE's new range of Z77 motherboards at CeBIT this year, and as you would expect were treated to some great looking new technology. 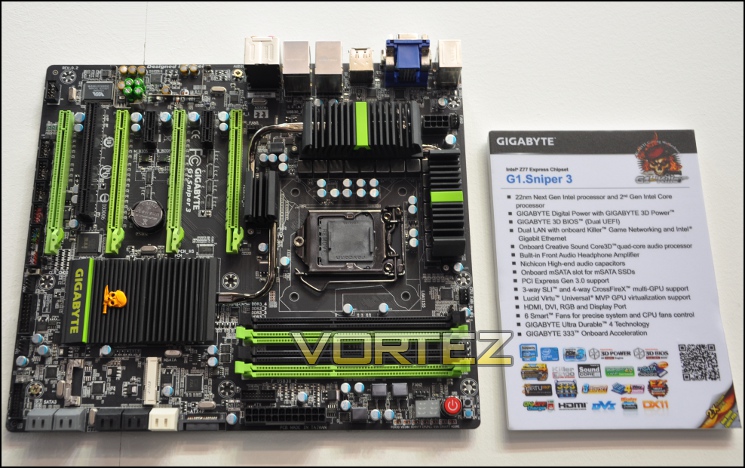 The flagship is without doubt the G1.Sniper 3 - GIGABYTE's latest addition to their G1.Killer range and the top of the range SKU for Z77. As with previous G1.Killer boards, the Sniper 3 has features you will not see in any other Z77 package which they're confident will tempt the overclocking enthusiast and extreme gamer alike. GIGABYTE have also taken the step of toning down the aggressive styling a little - but only a little - gone are the gun barrel and magazine heatsinks, but the distinctive black and green colour-scheme remains.

The G1.Sniper has an extremely robust power infrastructure, but as with the UD- range it also features OC PEG; providing additional graphics power via the SATA rail, OC PEG enabled boards should see greater stability under load in multiple GFX card configurations. The choice of SATA header rather than the more traditional 6-pin PCIE is put down to most power supplies typically having many more 'spare' SATA connections than PCIE, especially in 3 or 4 card configurations. Thanks to a PLX switch, the G1.Sniper 3 can support 3-way SLI and 4-way SLI/Crossfire with 32 PCI-Express 3.0 lanes.

Other features include a Bigfoot Killer NIC, Intel Gigabit NIC and Creative Sound Core3D hardware audio with high-end Japanese capacitors. The G1.Sniper is an EATX motherboard, wider and slightly longer than standard ATX; new case releases over the past year have meant that the size should no longer be the impediment it once was. 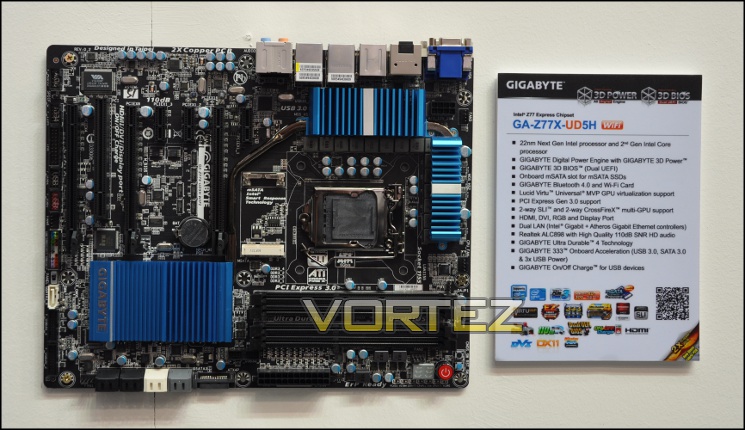 GIGABYTE's GA-Z77X-UD5H will be the high-end launch Ultra Durable motherboard, still feature-packed but occupying a slightly lower market position than the G1.Sniper 3. Plenty of extreme overclocking features - such as voltage read points, on-board PWR/RESET/Clear CMOS switches, etc - are still in evidence for those who want to break out the LN2, whilst support for up-to two GFX cards in SLI/Crossfire caters to the needs of most users.

GIGABYTE are also debuting Ultra Durable 4 with Z77, a standard which builds on Ultra Durable 3 by including power surge protection. With reliability being key to positive end-user experiences this should be a major selling point. 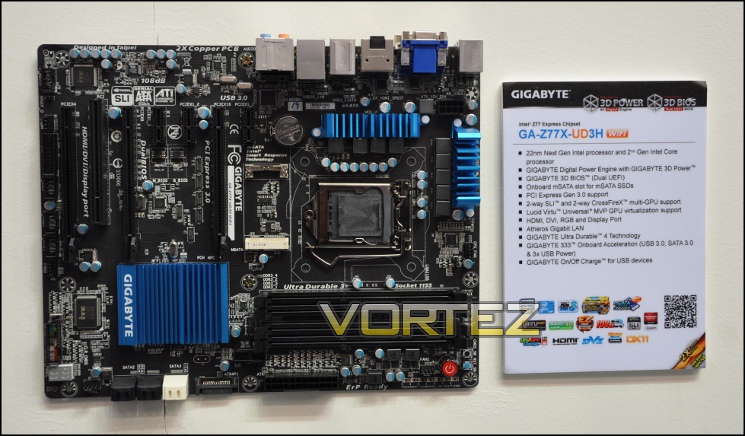 The GA-Z77X-UD3H is a more mainstream board suited to those who require the stability of the UD- line but without quite the high-end overclocking features of the UD5H. Still capable of 2-way SLI/Crossfire and excellent power delivery to CPU, memory and graphics alike, the board would be an excellent choice for gamers and enthusiasts with only modest overclocking ambitions.

As with all the ATX and EATX motherboards in GIGABYTE's Z77 line-up the UD3H includes an onboard mSATA slot for suitable SSDs, allowing users to configure Z77-specific features such as Intel's Rapid Storage Tech, Rapid Start and Smart Connect to speed up application responsiveness and reduce start times from deep sleep. Of course, using the mSATA slot isn't required; Z77 supports up-to four SATA3 6Gbps ports from the chipset for the latest SSDs.

Up Next: The Mainstream Z77X-D3H and a Pocket Rocket mATX G1.Sniper