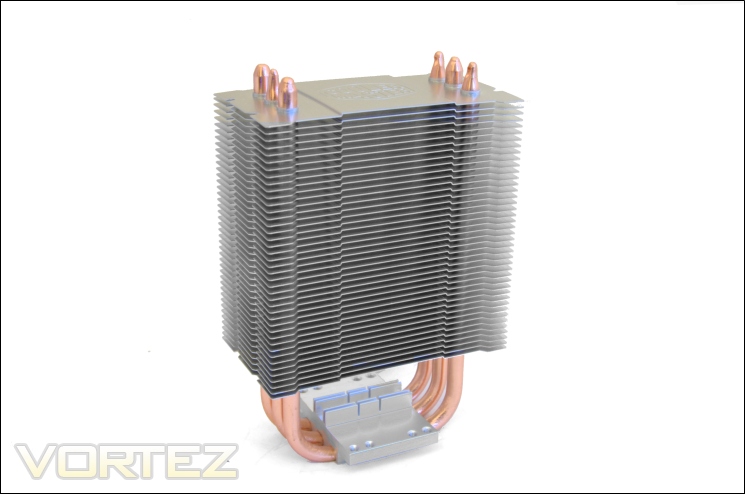 The heatsink
The heatsink is tiny in comparison to cooler we generally test here at Vortez. In fact, it is easily the most compact cooler we have had to review, taking up very little real estate and being more light weight than ALC units at a mere 386g fan included. The fact that the U-bend of heat pipes dont extend far from the already small base demonstrates how small the front face of the heatsink is. The cooler uses a standard copper aluminium and copper construction for the heat pipes and fins respectively. Like other Cooler Master Hyper coolers, there isnt much that stands out but thats not necessarily a bad thing in out books. 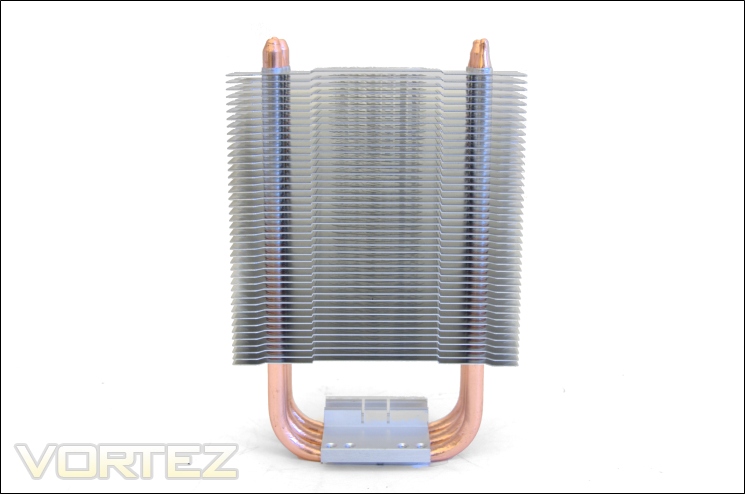 The front of the heatsink
The heatsink features 42 aluminium fins separated each by 2mm to give a very high density stack for such low cost cooler. The fins are all laminar and lie parallel to each other with no other features to help improve airflow. Rising up through the heatsink are three 6mm heat pipes all aligned behind each other. Ideally, these should be spread out to give better dispersive coverage but we have to remember that the cooler is designed with budget constraints so end-users can benefit from low cost cooling solutions. 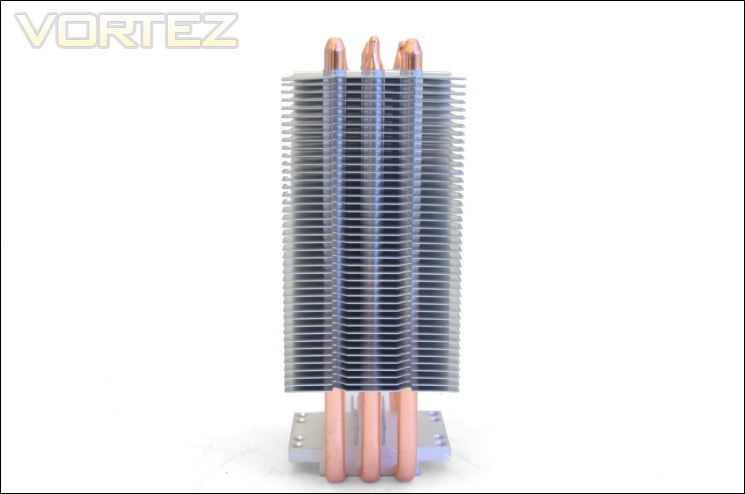 The side of the heatsink
From the side, we can see just how narrow the cooler is. In fact, the TX3 EVO shares the same width as the Hyper 212 EVO. Again, we see that the fins are flat with no winglets or other features to increase turbulence, opting in favour of a narrower fin pitch instead. Two grooves running down the length of each side are for the fan brackets to be clipped in. 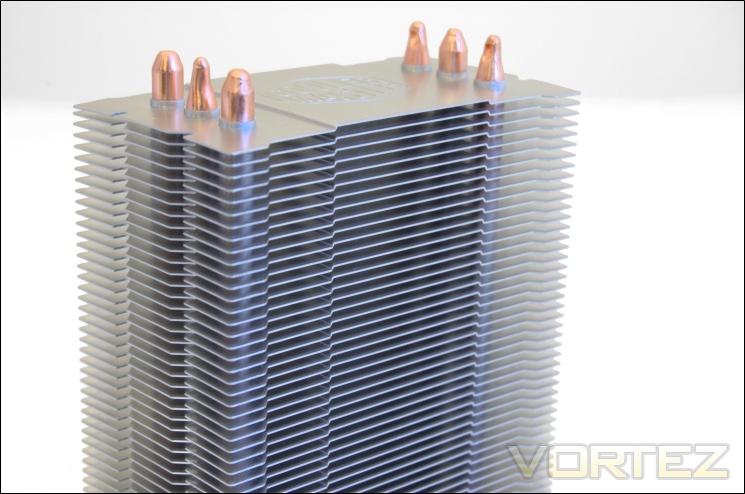 The fin array
The fin array has remained unchanged from the older Hyper TX3. The shape of each fin is exactly the same and characterised by its near rectangular shape. 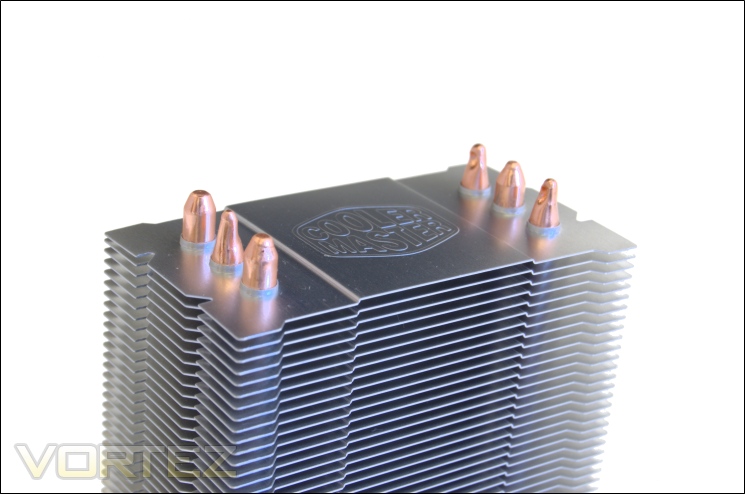 The top of the heat pipes
At the top, the fin can be seen with the Cooler Master logo engraved onto it like all the subsequent fins below it as well. The heat pipe ends are all exposed and form two lines representing each end of the three heat pipes. We also see that the fins have a matte finish rather than a polished mirror finished. Personally, this is welcomed as it reduces the appearance of finger prints. 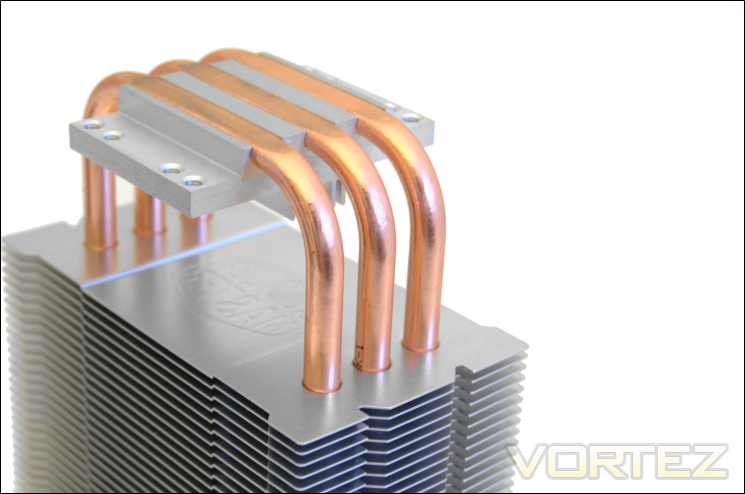 The three 6mm heat pipes
Here we see that all three heat pipes are alike and perfectly U-shaped from the base. As usual, these are made of copper for optimum thermal conductivity. The heat pipes are not as closely spaced as they are on the Hyper 212 EVO. 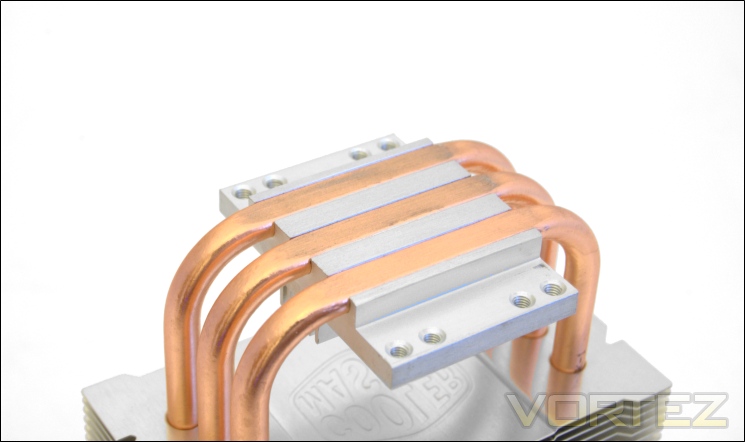 The base
At the base, we see that Cooler Master have stuck to using Direct Contact technology meaning all the heat pipes are exposed to make direct contact with the CPU. These are housed within an aluminium block. The disadvantage of such a design is that heat does not spread as effectively over the whole base but since the cooler only features three heat pipes, all of which immediately overlie the CPU, it makes sense to have them in direct contact with the CPU rather than have an additional copper block that may slow thermal transfer. The base also lacks Continuous Direct Contact technology as found on the Hyper 212 EVO but again, its due to having only three heat pipes. Compared to the original TX3, the EVO appears to have a much better finish at the base, showing only very minute gaps between the heat pipes and surrounding aluminium block. 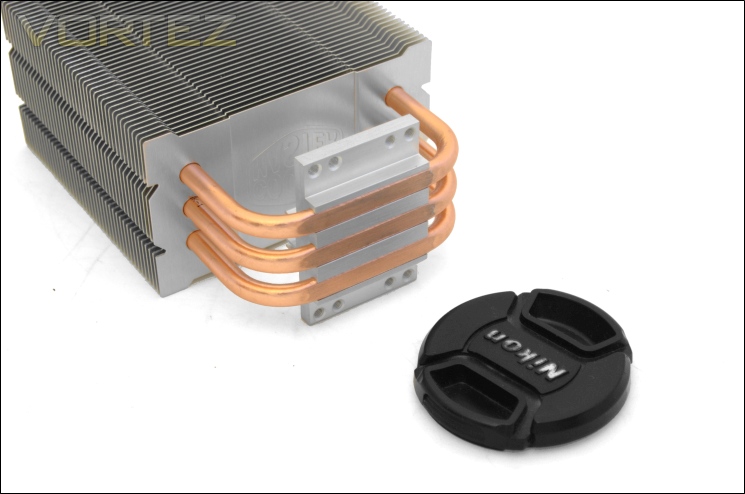 The smoothness of the base
Despite a fairly flat base that makes good contact with the CPU, it lacks a mirror finish.