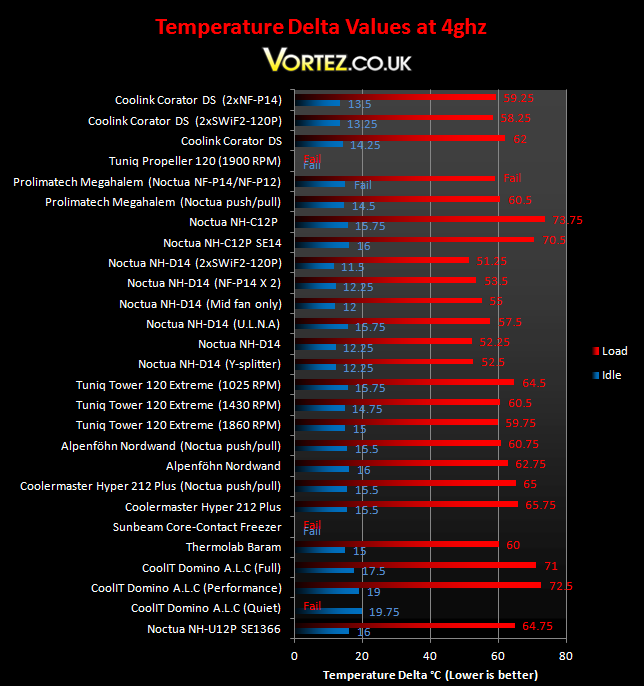 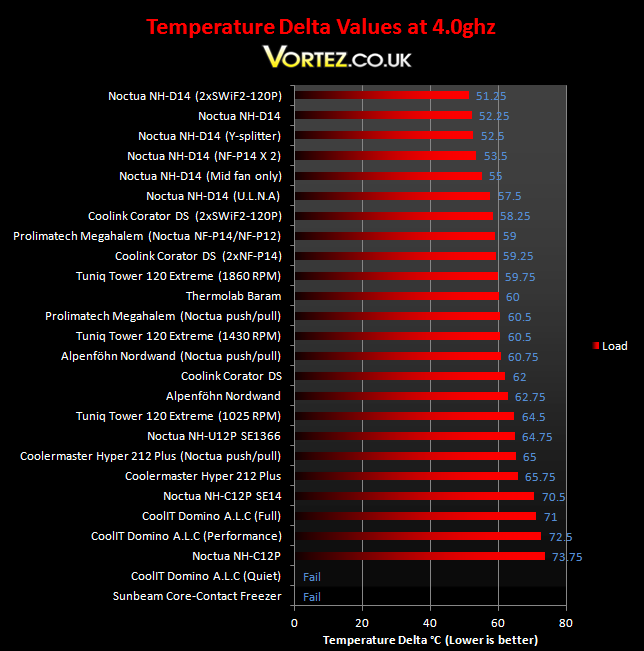 Finally, we come to where it really counts, the 4GHz battleground. The Coolink Corator DS keeps up its tremendous performance with a temperature delta of 62 degrees, coming just ahead of the Alpenföhn Nordwand. Both coolers are priced similarly, and based on that, Coolink are offering a great price/performance ratio here. The Tuniq Tower proves to be slightly better despite operating at a lower fan speed. Last time, when we tested the Noctua NH-D14, one of the observations was that using only the middle fan, the cooler still delivered the similar performance to a dual fan setup. I expected the same to hold true for the Corator DS but I was wrong. Attaching another SWiF2-120P to the 30 fin stack, more cooling potential was unlocked and the temperature dropped 3.75 degrees! Operating at a blistering 1700 RPM, the SWiF2-120Ps were more effective than 2 x NF-P14s attached. The Chillaramic thermal paste also contributed to the excellent performance we see here. A quick test between the Arctic MX-3 and the Chillaramic thermal paste on the NH-D14 proved that the latter was better.

My main concern with the cooler however is that only one set of wire clips is provided and if Coolink provided another set, it would give users the freedom to attach another fan without requiring any modifications.

Noise
Silence is not Coolink's primary concern and I can attest to that when benchmarking the Corator DS with the SWiF2-120P. According to PC Wizard and BIOS, the fan was operating at 1900 RPM, 200 RPM above the specifications. While the noise was not intrusive, there was a distinct whirring from the fan. Coolink addresses this through the PWM functionality of the fan so the cooler remains quiet during typical usage. Using a second fan and a 4-pin Y-splitter, the fan speeds reduced to 1700 RPM.