👤by Matthew Hodgson  Comments 📅07-04-20
Performance Testing
Moving on from the software, on the face of things, the mouse itself certainly lives up to CORSAIRs reputation, their build quality is rarely anything other than excellent, especially in the last few years where they seem to have really upped their game. The dongle and mouse are pre-paired from the factory so getting up and running is about as fast as its possible to be. We also had over half a charge sitting in the mouse which was nice.

While the mouse has a Bluetooth and wired mode, well base all of our testing on the CORSAIR Slipstream wireless technology, because youd just buy a cheaper/lesser mouse if you planned to use it wired or with Bluetooth. CORSAIRs Slipstream has been seen before in other reviews, but for the first time we see it upgraded to a 2000Hz polling rate, offering 0.5ms response times and 2000 position updates per second. Mere mortals, like myself, may not be able to feel the difference, even though its twice as fast, but with monitors now approaching 300Hz, and with more frames due in the future, competitive eSports gamers might just gain an advantage over their enemies. Not only is the Slipstream technology faster, it also shifts radio frequency on-the-fly to ensure a strong and stable connection, while a smart protocol layer intelligently retransmits data packets for a level of redundancy, ensuring your movements always reach the computer. We didnt necessarily notice anything going on, but thats exactly how it should function; silently in the background. 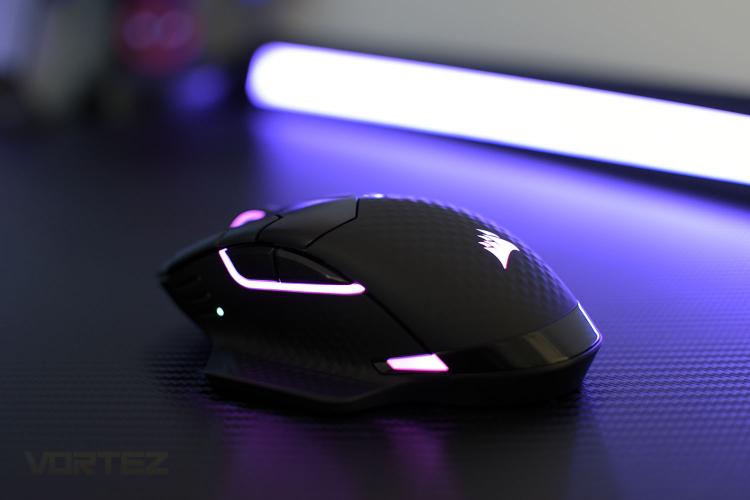 Comfort is super important with a mouse, quite often its your primary means of input with your PC, and with certain games like RTS or FPS games, youll rarely put it down. Maintaining a comfortable gaming posture is therefore essential, and were glad to say the Dark Core RGB PRO offers that in spades. The interchangeable side piece giving the option of a pinky-rest, as well as the smooth, textured plastic all works well together to present a mouse perfectly suitable for a palm grip, however, the choice of putting the glossy strip around the back of the mouse presented a weird issue where it would feel consistently different to the rest of the mouse, making your hand feel greasy/wet despite being washed and clean; this only appeared as an issue for someone with smaller hands but its an issue non-the-less.

The layout of the buttons on the mouse has clearly been the topic of many a meeting, they felt just about perfect to myself; the switches underneath are provided by OMRON so they felt great to click too. Thumb buttons are something which can be particularly handy in certain games, so having both placed in such a fashion that they can be equally utilised is quite a task, however CORSAIR have managed that. The same goes for the two additional buttons alongside the left-click. These are typically used to adjust the DPI on the fly, but having found a DPI setting that I liked, those quickly got changed to a different function in-game using the iCUE software. Easy to set up and easy to use  perfect.

Battery life is a little lacklustre, at 50 hours if you keep all of the LEDs turned off and use Bluetooth transmission. That drops down to a maximum of 18 hours if you use it properly. While thats more than enough for even the most mammoth of gaming sessions, it does require you to charge it several times a week if you enjoy your gaming or use your PC for work as well (which a lot of people are right now). We were a little bit excited by CORSAIRs inclusion of the open Qi Wireless charging standard, touted to work with most wireless charging bases, but found that all 3 of the charging bases here didnt appear to work. We dont have the CORSAIR MM1000 mousepad with the built-in charger to test that out either, which was a shame. Wireless charging is absolutely the future, much less janky than plugging in a cable every night.