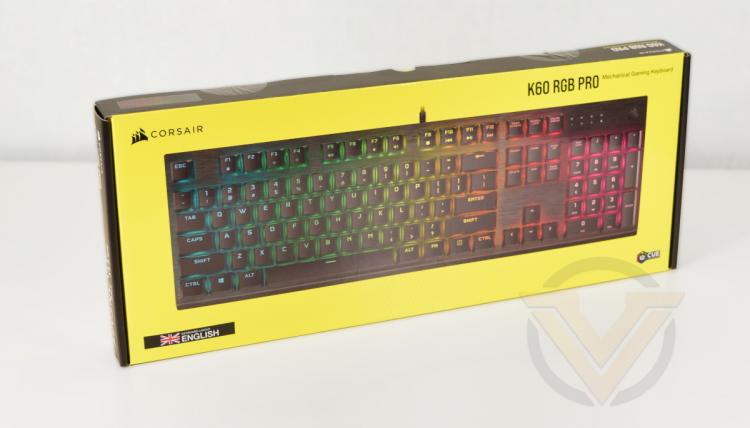 Say whatever you like about their products, CORSAIR do an exceptional job in keeping their packaging and livery consistent across their range. Once again we see the familiar yellow and black colour-scheme on display on this slimline keyboard box, the nature of which is something of a hint as to its rather frugal contents.

While the image shown is of a generic K60 RGB PRO, the front does at least clearly show the keyboards actual layout. Thatll be important anywhere the keyboard is sold that straddles regions.

Technical information is displayed on the bottom edge, including the switch type, polling rate, dimensions and NKRO/anti-ghosting features. Here, and the rear, is where youll need to look for confirmation of the CHERRY VIOLA switch type. Were a little perplexed that this isnt shown on the front too, but that might be due to this being an early production sample.

The keyboards more broad features are displayed on the rear, where the keyswitch is much more clear (and described as linear and smooth). CORSAIR also highlight the requirements, iCUE integration, and per-key customisable lighting.

Heres our first look at the K60 RGB PRO. Its a compact design from front to back, measuring just over 13cm from front to back rather than 17cm on the vast majority of the rest of CORSAIRs keyboard range. This is because the new K60 frame dispenses with the characteristic lip seen on previous K-series models, including the functionality often located in this zone.

The CORSAIR K-series brushed aluminium frame returns however, adding more than a touch of class to proceedings.

Normally wed discuss the included accessories here but its notable that the the K-series range doesnt include any. Inside the packaging is just the keyboard, quick-start guide and warranty information; you dont get so much as a keycap remover. Now theres a commitment to frugality we can get behind and speaks to the designs pretensions of affordability.

In other aspects the keyboard is of standard layout - UK in this instance - with no dedicated media or macro keys. A wrist-rest is also absent, and we can confirm that this model is not compatible with the very plush K100 RGB rest.