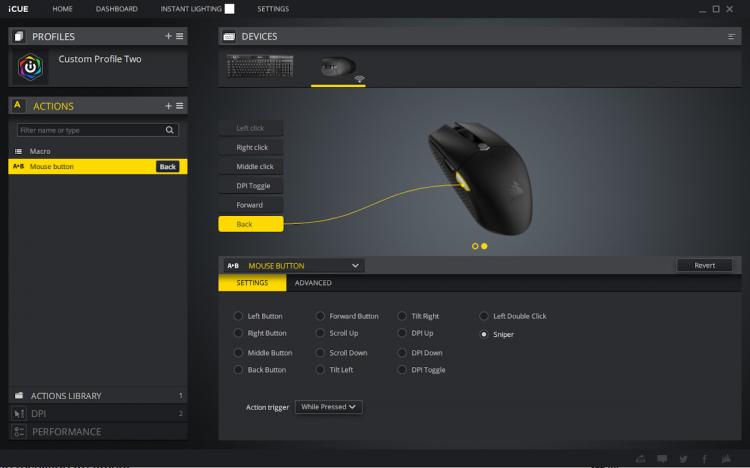 CORSAIR are striving to leverage their iCUE unified software as widely across their peripheral range as possible, so its no surprise to see it in use even when connected to the no-frills KATAR PRO WIRELESS. Despite the lack of RGB lighting there are still a number of core features the software controls:

- Button re-mapping to custom actions including keystrokes.
- Custom DPI levels to cycle between and customise the LED indicator
- Profiles for the above
- Broader mouse settings 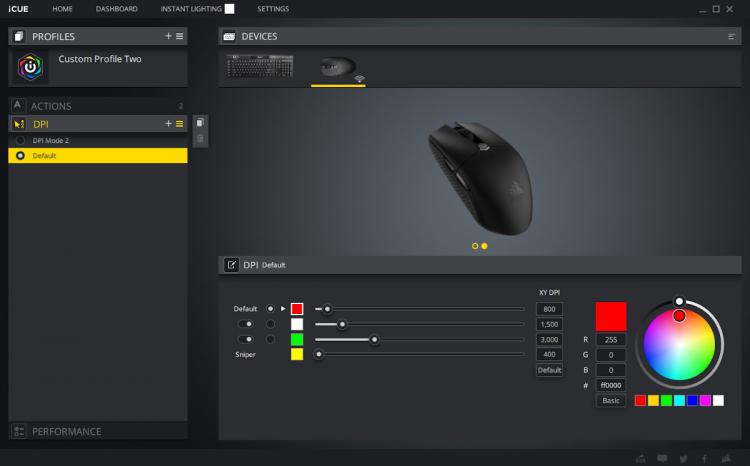 The software is as easy to configure for the mouse as it was for the K100 RGB, once again indicating how much of an asset it has become. Setting up simple keybinds is straightforward and there are ample online resources to create and apply more complex macros and actions.

Included among these actions is a dedicated Sniper Mode toggle-able DPI level. In the absence of a Sniper button, this preset can be bound to any button on the mouse using the Mouse Action -> Sniper button remapping. That could be a very nifty feature when playing FPS titles if used in configuration with software profiles.

In addition to what could be considered standard features, the iCUE software also unlocks more advanced performance and power-saving options. You can set up modes that define when the sensor enters low-power sleep, and enable battery indicators in the system taskbar, each with a view to either improving performance of eking out more battery life. Plus, the receiver polling rate can be configured up to 1000Hz. Not bad for such an unassuming mouse. 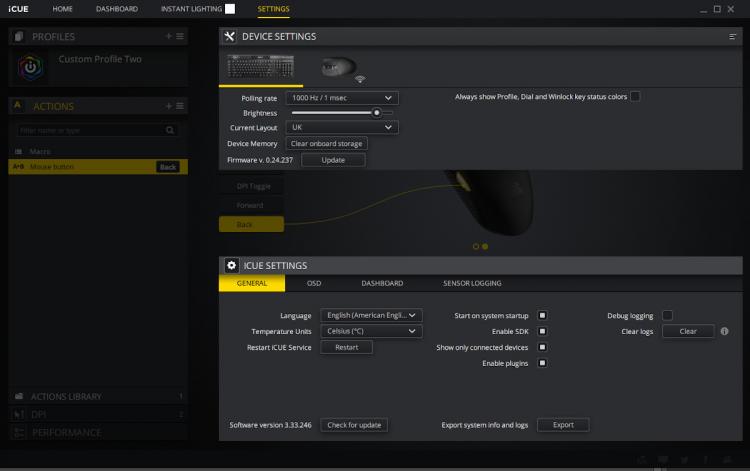 To assess the performance of the mouse we turned to two current favourites: Hades and DOOM Eternal, an RPG Roguelite and FPS respectively.

Weight has always been an issue in the plethora of wireless mice we've engaged with over the years, particularly in ARPGs and FPS titles. The more lightweight the better for reaction times, whereas the inverse is true in typical MMOs (where travel distances are short and more buttons are infinitely more useful).

During testing the lighter weight of the KATAR PW was immediately obvious, making it far less of a struggle than is typical with wireless mice. A long DOOM Eternal session with wide mouse movement didnt lead to fatigue, and the short but precise staccato movements necessary in Hades werent an issue.

The PixArt PMW3325 optical sensor doesnt appear to show any evidence of angle snapping, but users should take care to disable Enhance Pointer Precision in the iCUE Performance settings to remove the most obvious acceleration. The lift-off distance by contrast is not adjustable and sits at a few millimetres.

More broadly, the main and right-click are solid and satisfying with no play before the actuation point. Similarly, the wheel offers good feedback in each notch and was stable at fast rotation with no over-spin. Its middle-click was also reassuringly stable if a little stiff, and one of few mice where the middle-click can be used in standard operation without requiring more than usual finger dexterity.

The KATAR PWs Forward side button is reasonably responsive with actuation point early in the press. Its back side button was another story; initial tests showed it to be mushy and unresponsive with a difficult to detect actuation point. Such was the poor quality that accidental double-clicking was an infrequent result. At first blush therefore we would not like to use it in gaming if reliability was primary concern (including as a Sniper DPI Mode button or as a main button in MMO/RPG/MOBA gaming).

After investigation we discovered that the Back button was fouling on the removable palm rest section of the shell, preventing it from actuating smoothly. Pushing the shell to the right (in a manner that didnt appear to be intended) mitigated against it, and the fit clearly isnt perfect. Its a disappointing flaw that in fairness might be specific to our sample.

The balance point is slightly towards the rear of the mouse, but centrally located on the horizontal axis. Thats to be expected given the location of the battery, and by no means a problem in day-to-day usage.