👤by Ed Hume  Comments 📅02-08-16
Test Setup
Normally we like to see two fans of each model to review, so that if something is wrong with a fan, we can go ahead with the review, using its mate. We anticipated receiving four fans  two 120mm and two 140mm. Instead, Corsair indeed sent two of each model of these fans. If you have been keeping track, there are four models of each fan for each of the two sizes. At two fans per model, that makes sixteen fans (!).

We tested each fan. To record a fans RPM, it was placed on a freestanding mount. The sound pressure level was noted with a Tenma 72-942 at a distance of 10cm, which was adjusted to the industry standard 1m.

The air output of each fan was noted with an Extech AN100 anemometer which was at the rear of a cubic 200mm measurement box. The fan was either mounted to a 30 FPI (fin per inch) radiator or to the box itself. The AN100 averages the airflow, in this case 10 measurements per test run. All the fans you see were compared with each other using the same SPL meter and the same anemometer. The importance here is the relative measurements.

Because the fans ran reasonably close together, we were able to get the average output of eight fans at 120mm, and eight fans at 140mm. Having so many fans at each size meant that we were not at the mercy of industrial variation. Below is an ML120 mounted on a 30 FPI radiator, with the anemometer mounted behind it. 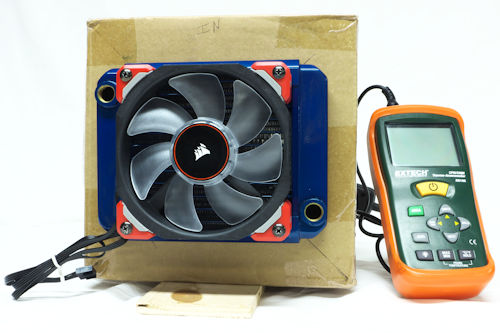